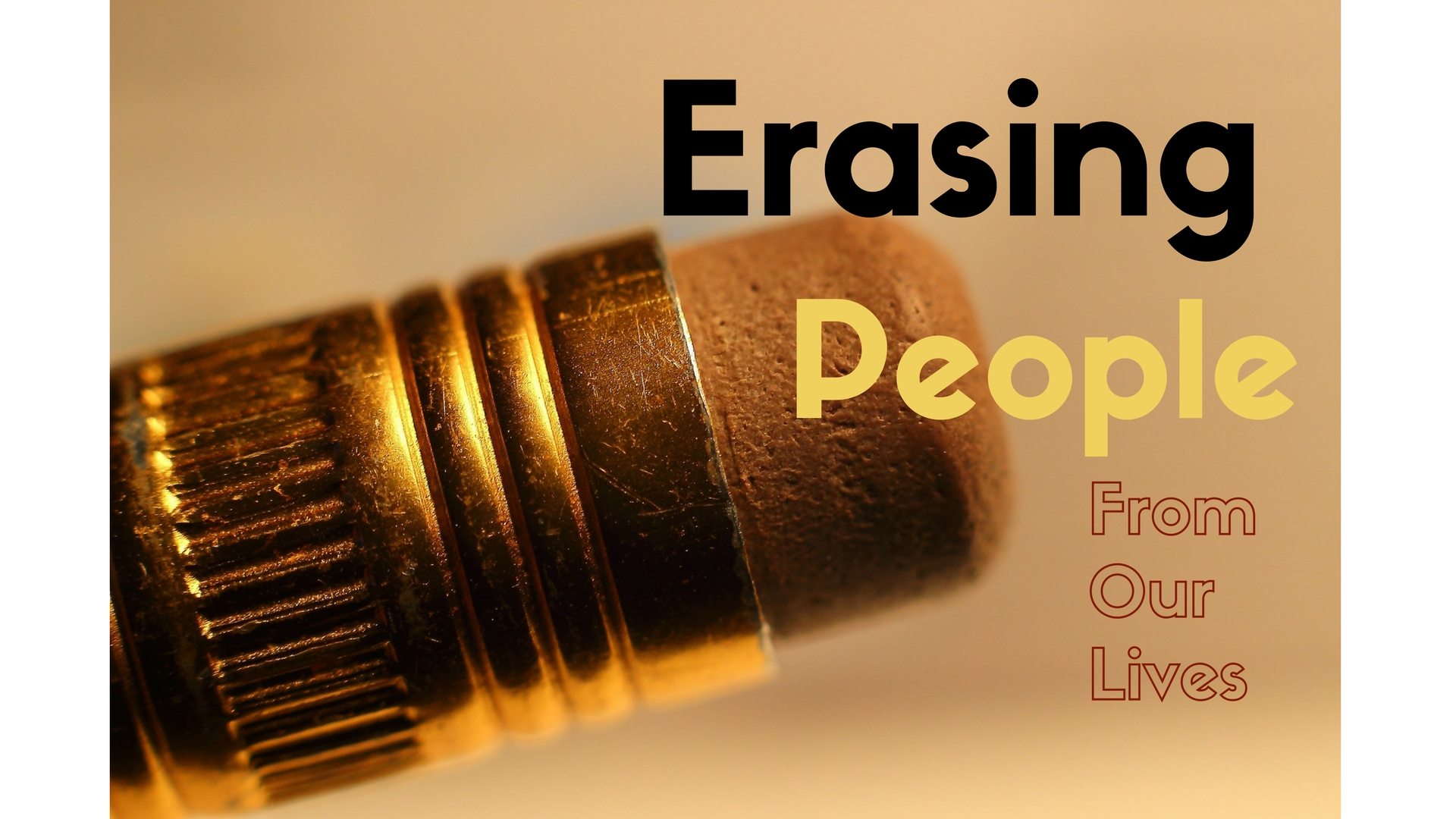 A while ago we noticed that many people are pushing others away from their lives. The number keeps growing more and more rapidly. They determine that they have no need of certain people. So, they eliminate these people’s ability to be a part of their lives any longer. It’s their way of erasing people—at least certain ones, from any interaction, what-so-ever. They don’t need them, like them, and/or love them any longer, so they’re out! And for that reason, they turn their backs to them as if they no longer exist.

Now, we want to first clarity something here. We realize we’re only hearing one side of the story. There may be a different “truth” going on here than we’re being told. And this unrevealed truth can totally change things. But when abuse or addiction issues are involved, it can become necessary to push the other person away (for at least a determined period of time) to see if changes are made in their abusive behavior. But we’re not talking abuse, addiction, or safety issues here.

We’re talking about non-abusive spouses/relatives/spouses who truly WANT to reconcile to work through the problems with these erasing people. They will agree to do almost anything to have a chance at “do-over.” Their motives and actions are sincere. Even so, they are no longer being given the chance!

In particular, we’ve been watching spouses dump out of marriages at alarming rates with the (now common) excuse “I love you, but I am not IN LOVE with you.” This is their justification for their “erasing” activities. They push their spouse entirely out of their lives; and then they build new “single focused” lives apart from their spouse.

Forget the broken vows, and broken hearts they leave behind. And forget the broken, and confused children, other family members and friends that are forced to struggle to make sense of it all. But as they often say, “God wouldn’t want me to be unhappy.” It’s amazing that somehow, they don’t connect the dots that now all of THESE people are unhappy. Does God only want the one person happy, but the rest don’t matter?

Additionally, we’ve been watching families and friends splitting apart because certain “members” don’t feel the same love, and/or commonality for each other as they once did. They claim that they “grew apart.” So, they push away parents, siblings, other family members, friends, or whoever they don’t want in their lives anymore. They then say, “it will be best for all if we split.” This is posed as if it’s the “kind” thing to do. Hmmm… where do we go to vote on what’s best for “all” and what’s TRULY the “kind” thing to do? Obviously, nowhere, because it’s being done regardless.

In this Marriage Insight, we just want to bring this issue to the forefront. There doesn’t appear to be much light being brought to focus on this growing issue.

Sure, families have broken up through the centuries. And sure, there are some people we need to back away from because of their toxicity and their abusive ways. But this is happening in epidemic numbers to good families. These are good people who WANT to work out the conflicting issues in their lives together. And yet they aren’t given the chance! NOPE! One person decides for all. And everyone else has to pick up the pieces. This one person has decided that the task of tolerating or reconciling their differences, isn’t worth it to them. So that’s that! That person is erased; it’s as if they don’t exist!

And what’s REALLY distressing is that many of these people say that they are “Christians.” They believe that God is supporting them in this decision. This is happening even though it doesn’t line up scripturally in any way. It is like they believe that God has written a new rule for them. It may not be for anyone else, but it is for them.

This really hit us when we read the scripture in John 17:21-23. It’s where Jesus is praying to our Heavenly Father:

The Mission of Working Through Differences

What that tells us is that God desires that we “become one” as Believers. We are to work THROUGH our differences. We are to persevere. (See James 5:3-4 and Romans 5:3-4.) This is ESPECIALLY true as it pertains to marriage where we’re told to “cleave together as one.”

If we don’t apply tenaciousness in persevering through our differences, we aren’t following God’s commands. We can’t really call ourselves followers of Christ if we aren’t working together “to love as we are loved” in all our ugliness and sin—giving grace as God gives us grace. We aren’t following the ways of Christ. Essentially, we’re doing our thing, not His.

God KNOWS it is tough for us to love others. I’m sure it is tough for Him to love us many, many times. But He tells us to tough it out anyway, so we reflect the “oneness” and love that He wants the world to experience. We are His witnesses of His love for everyone. He wants to give to them love and grace, just as He has given it to us. We are to be a living picture of that love.

Erasing People Does Not Extend Grace

But what happens when we go off dumping and erasing one another? What happens when we are seeking an ever-changing “happiness” and the FEELING of love? Just what does that tell those who are witnessing our words and our actions? We call ourselves “followers” of Jesus Christ, and yet we do these things. Won’t that bring up questions in their minds as we erase, dump, and seek feelings? Won’t they question, “Just who is this Jesus, anyway? Is He credible if His followers do the opposite of who He is?”

Yes, He is! DESPITE those who abuse His grace—He IS credible. That is a fact, despite the abuses of HIs followers.

When we “fall out of love” or when we aren’t feeling the love, we believe we should for others, it takes real faith in God to stay faithful. It takes the application of perseverance and tenacity not to give up doing things God’s way.

So, we want to ask you this question (as we’ve asked ourselves). Are you trying to erase people from your life that God would not want you to? We’re talking about erasing a spouse, or a family member, or someone else. Could it be that God wants YOU to show His love to them, even if that love isn’t reciprocated? Think about it. We’re not talking about abusive situations, but rather ones in which the “feeling” may not be there for them right now. After all, God’s name means LOVE. Who better to teach you to love than God, Himself?

P.S. The text of this message comes from a blog that Cindy wrote several years ago. But we feel compelled to put it into a Marriage Insight at this point. That’s because the problem keeps growing. Please join us in praying about this issue. It’s an important one!

Also, Cindy wrote a follow-up blog about this matter after this one. You can read it at: Erasing People from Our Lives – Part 2.

13 responses to “Erasing People from Our Lives”