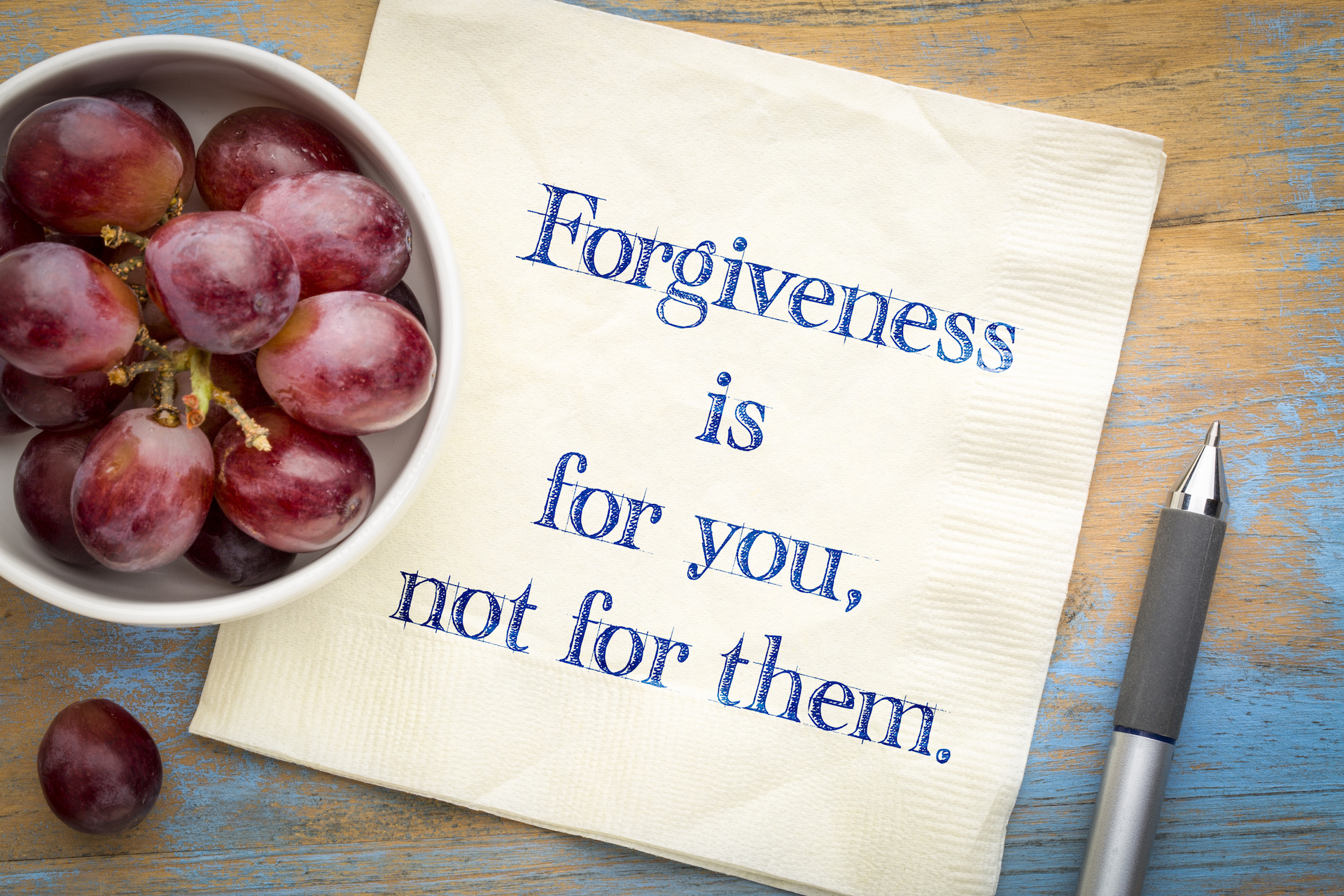 “Sure, I’ll forgive that man, when I’m good and ready,” the wife says as we sit around the table. The man in question sits eyes downcast, speechless before her anger. “If you only knew the misery he’s caused me, you’d understand why I’m not going to knuckle in when he says, ‘Sorry,'” she continues. “Sure, I’ll forgive him, but not until he’s paid for the dirt he’s dragged us through.”

He steals a glance at her, and the air, hanging heavy with hostility, oppresses like high humidity. We sit in silence. I can see by the set of her jaw that she is reliving one of the many scenes of conflict that happened in this kitchen. Or is she recalling the day last week when she and her daughter drove into town to confront “the other woman?”

They rang the doorbell and waited. Then the woman stood framed in the screen door, slowly recognizing her callers. Her face was an impassive mask. They stood mute in mutual hate. Then the daughter broke it. “I’ve wanted to see your face for years,” she said. “And now that I’ve seen it,” she continued, and spit on the ground, “you make me sick.”

“Oh, no, I’m not knuckling under,” the wife says again as she gets up from the table. “He can come crawling on his knees for a change.”

I’m remembering this scene years later. In the years that passed, the other woman married and moved out of his world. Slowly, bitterly he paid, repaid, and overpaid for all he’d done. At last, one night when she herself was deep in trouble, lonely and desperate, she offered her forgiveness. It was too late. “You can keep your phony forgiving,” he told her. “I don’t need any of it now. I’ve paid through the nose for what I did. Who needs forgiveness when he’s already paid?”

Central to the work of forgiveness is the task of working through our feelings of anger. In the painful story just told, the anger of the man who betrays his wife, the rage of the woman betrayed, the hostility of the disillusioned daughter, the alienation in “the other woman,” the malice of years spent spiting each other, the bitterness of exacting repayment, the wrath of a man long ignored all shows how anger takes many forms in human tragedies.

Repressed anger hurts and keeps on hurting. If you always deal with it simply by holding it firmly in check or sweeping it under the rug, without any form of release or healing, it can produce rigidity and coldness in personality. Even worse, hostilities pushed down into the depths of consciousness have a way of fermenting into other problems. They cause depression, anxiety, and eventually mental breakdown. Or repressed anger may come out indirectly in critical attitudes, scape-goating, or irritableness.

Repression is an unwholesome and potentially dangerous way of dealing with anger. However, it is obviously safer than venting our anger on everybody else. If the choice is between expressing anger by venting our venom or repressing it, then we better choose the latter. It’s safer for others, for society, and ultimately for ourselves.

But there is a third way. It is not expressing or repressing but confessing your anger. Anger and hostility must be released. Somehow you’ve got to get it off your chest and out of your system. You can either blow it out in steam —or talk it out in honest self-understanding.

Dr. Willard Harris of Ohio State University reports that anger and fear affect the heart in identical ways: the pulse speeds up, and the breathing rate doubles. “Acute anger has been associated with an acute heart attack. Heart damage can be done by repeated bouts of anger over a long period of time.

But more serious is the sickness a hair-trigger temper produces in an explosive personality. It prevents personal and social development, halts spiritual progress, cuts one off from fellow humans, and blocks good judgment.

Release from anger comes from owning up and opening up. Own up to your anger. Own up to yourself, to those whom you’ve hurt by your hostility, and own up to God. Yes, He already knows all about you, but confessing it to Him is the first step to strength.

Owning Up to Anger

The Bible says, “You should get into the habit of admitting your sins to one another, and praying for one another, so that you may be healed” (James 5:16). When you own up to anger, don’t do it just as a grudging admission-open up. That is the real test of honest confessing.

You see, the problems of anger and hostility are much deeper than our surface admissions of guilt. Each of us harbors depths of anger that lie closed and hidden until a moment of stress when the smoldering embers burst into flame. None of us knows how much anger is within us until we are aroused.

George Duncan, the great Scottish Bible teacher, has written: “We never forget anything. In the depths of our minds there is a fearful accumulation of every thought, every emotion we have ever known. The importance lies in what accumulates. These depths of human personality need cleansing. The danger is that we deal only with the surface of our lives —like washing our hands and our faces, and thinking we are clean.” The deeper reserves of anger-infection need cleansing if we are to be at peace with ourselves and with others.

You can spend all your life swatting the flies of temper, anger, and irritableness. But far better, clean out the breeding ground down in the depths of your personality. Honest openness before God and your understanding sister or brother can let the light into your life to begin the healing in depth that God can bring —the healing of forgiveness. James the apostle writes: “Let every man be quick to listen, slow to speak and slow to become angry, for man’s anger does not bring about the righteous life that God desires.” (James 1:19-20)

He was quoting the ancient book of wisdom in the Bible, called Proverbs, which has this to say of temper: “A quick-tempered man does foolish things… Better a patient man than a warrior, a man who controls his temper than one who takes a city… A man’s wisdom gives him patience; it is to his glory to overlook an offense.”

To channel your anger, slow down.

Learn to delay your anger. Set a later time to settle your conflict or misunderstanding. This is one good use of the habit of postponing. Put it off till later. Then your emotions will cool off, your head will clear, and your judgment will return.

Don’t put it off too long.

Set strict limits on the delay. Don’t let yourself do a long, slow burn over anything. Getting mad may be sometimes necessary, but remaining mad never is! So don’t store up unfinished anger agenda. Keep close tab on yourself. Balance all your books by the end of the day. “Don’t let the sun go down upon your wrath,” the Bible wisely exhorts. The poison of hostility is bad enough in your conscious mind; don’t force it down into your subconscious by sleeping on it. Keep up-to-date-accounts.

Learn to be honestly open with your anger problem.

Go to the person with whom you were angry. Straighten it out. Life is too short to be ruined with bitter grudges and continuing indignation. Learn to go and make things right —humbly and graciously! One of the best ways to controlling anger is to talk the problem out with a friend or even yourself. Talking to the mirror, keeping a journal, facing yourself in your own favorite way is indispensable.

Dr. William Menninger counsels: “Do not talk when angry. But after you have calmed down, do talk. Sometimes we push each other away and the problem between us festers and festers. Just as in surgery, free and adequate drainage is essential if healing is to take place.”

Ask yourself, “Exactly why did this touch off my temper?” Self-understanding is a key to anger prevention. Do your best to be understanding of the other person, too. And be sure you understand the true situation between you. It’s seldom what it seems to be. All these may help you defuse the explosives in your personality.

The help of an understanding, loving counselor may open the insights you need. A doctor may help you understand how and why these feelings have risen. A minister can guide you in accepting God’s forgiveness for your guilt as you receive Jesus Christ as your personal Savior. Then you can accept yourself and ho on to full forgiveness of others. You can discover the resources of love that God offers for transforming your life and for becoming a transformer in the world about you.

Making peace with your own anger and being at peace with another’s right to be angry are two qualities that free us to be effective reconcilers. Since forgiveness is, at its heart, the resolution of anger within and between people, it is the person whose anger is accepted, channeled, and directed appropriately who can make peace-seventy times seven.

This article comes in edited form from the very powerful book, The New Freedom of Forgiveness

by David Augsburger, published by Moody Publishers. There was so much more that David had to say on this subject that we couldn’t include. If you purchase the book, it will fill in some of the details we couldn’t put into this article along with much more helpful information. Dr. Augsburger combines personal testimonies with Scripture for a highly practical and motivating guide to applying forgiveness in your life.

In addition to the above article (and obtaining the book mentioned above), there’s also a great article written by Denise George. It contains “6 myths that may be keeping you from letting go.” We encourage you to read:

Tagged: forgiveness and trust, when to forgive

4 responses to “Forgiveness And Releasing Anger”