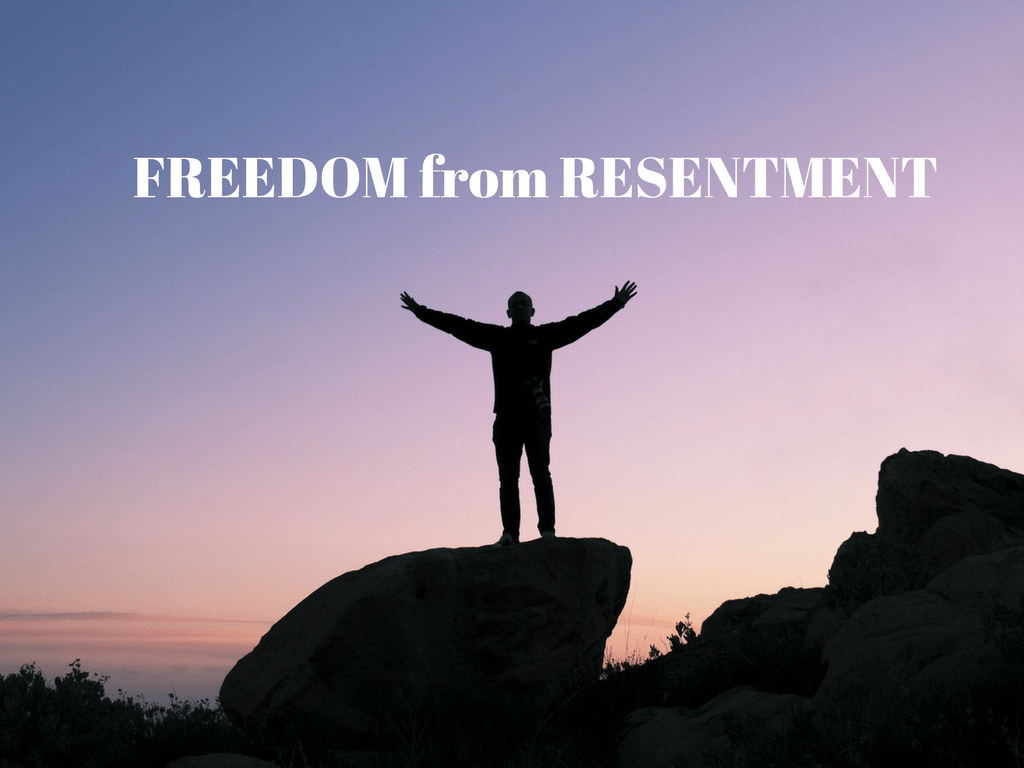 The following is a story we could all learn from on letting go of resentment. Ultimately, letting go brings about freedom from resentment. Author Richard Walters, in the book, Forgive and Be Free, tells the testimonial of Tom Norris who had become an extremely bitter man after his wife Bette had left him, taking their two children with her. She wanted to live a life that was more exciting than they had together. Even after leaving him she continued to hurt Tom even further with hateful words and actions.

The situation between them was only getting worse when Tom realized he couldn’t let things continue on the way they were, “But he didn’t know what to do about it.” So he looked for a friend who could give him good advice.

There was only one other person in whom Tom had ever confided. That was Ray Lewis, who worked in the same shop where Tom worked. He knew that Ray found a lot of strength in his Christian faith. Tom didn’t understand that, but he admired Ray.

Tom found Ray alone and wasted no time getting to the point. “Ray, what would you do if you had somebody hassling you time after time? Would you just grin and bear it?”

“Yes, it’s my ex-wife. It’s especially painful when it involves my children—especially when it doesn’t stop and when she does it on purpose. What can I do about it?”

“The thing most people would want to do first —at least the urge that comes to me first —is to get even. They want to hurt them right back. But hurting them back is wrong, of course. And it doesn’t work either. Often, the hardest part is not doing the things you feel like doing. It involves not letting your feelings dominate your mind. Because if your mind doesn’t stay in control, you may lose control of your behavior. And then the mess is a whole lot bigger. But you’re probably wondering how much longer you can continue on like this, right?”

“Well, that’s where being a follower of Christ helps me tremendously. It has made it possible for me to get through some rough places in life. I don’t know how I would have gotten through some of them if it hadn’t been for the help I get through my Christian faith,” Ray replied.

After talking for a while Tom asked Ray to explain more. They met together to discuss Tom’s questions about Ray’s beliefs in Christ quite a few times over the next several months.

After a lot of questioning, author Richard Walters writes:

Tom eventually decided to believe in, and live for, Christ. Then he discovered, a little at a time, that Ray was right. Christ did help him become more patient and cooperative with Bette. He amazed himself one day by apologizing to her for his lack of cooperation and his part in their petty bickering. He felt very good about that. But every time he thought of how she had rejected him and the humiliation it had caused him, anger surged within him. He had hateful thoughts toward her and knew that he had not forgiven her. Good works had not been enough.

He talked to Ray about it. “I’m doing everything right, but the old problems keep bothering me. I’m keeping my behavior under control, but, in spite of that, I haven’t won the battle. What’s missing?”

Ray explained that forgiving is an act of the will. Tom had made a deliberate, conscious decision to change his behavior. But he had not made the same deliberate, conscious decision to forgive her for what she had done. For Tom, to stop doing wrong was a commendable and necessary step. But he hadn’t yet, by an act of his will, forgiven her. Ray’s advice to him was to forgive, claim it, close it, and keep it closed.

Tom stepped as far as he could. It wasn’t a very big step, but it was all that he could do. And that’s all the Lord ever expects of us. When Tom used his will, to the extent that he could, to do what was right, the Lord helped him with the rest of it. Tom knew that he had forgiven her. He claimed it, considered it closed, and determined to keep it closed. As a result, Tom enjoyed peace he had never before experienced.

[But two weeks later Tom was served with a letter from Bette’s attorney falsely charging him with getting her pregnant, threatening to sue him for child support. He was furious and went to Ray incensed over the injustice of it all.]

He said, “Ray, I swear to you I haven’t touched that woman since the day she walked out on me. I thought she had hurt me every way she could, but she’s found a new way.”

They talked for quite a while. And then Tom said, “I think the thing that hurts the most is that I thought I’d forgiven her. And now I find I haven’t. Look at me. I’m as angry as I ever was.”

“Tom, the fact that you’re angry over this doesn’t change the forgiving that you’ve already done. You’re angry about a new wound. It’s understandable you’re angry with that. Don’t for a minute think the feelings you have now change the forgiving you’ve already done. They don’t. Again, you’ll be guided by your will in this. And I believe you’ll again decide to forgive. There has to be a way out of this mess. Together we’ll find it.”

They did, although things were in turmoil for a long time. When Bette’s child was born, Tom volunteered for a blood test. At that point Bette dropped her false accusation.

Tom grew spiritually during this time and was able to control his own behavior. He worked hard at developing relationships with his children. Those relationships blossomed.

Meanwhile, Bette got enmeshed in a circle of friends who were heavily involved in drug abuse, sex, and marginal living. She was apprehended for child neglect, and the infant was placed in a foster home. Tom was given custody of his two children.

When that happened he said to Ray, “I’ve prayed to have my children with me, but not at this cost. It breaks my heart to see what Bette has done to herself.” He prayed for her regularly.

Forgiving changes us. It doesn’t change the other person.

Forgiving heals past wounds. It doesn’t protect us from future wounds.

Forgiving the second time may be harder; and the third time even more difficult. So do we quit forgiving? No, we follow the principle Christ taught Peter, that we always forgive (See: Matthew 18:21-35). This doesn’t mean that we condone wrong behavior or leave ourselves unprotected against future hurt.

But we must recognize that forgiving may take place over a long period of time. It may be a cycle repeated over and over in a relationship with a friend or family member. Unfortunately, there’s no special process that makes this repetitive forgiving any easier —there’s no quantity discount.

Here’s what we can do:

1.) Begin where we can begin. Forgive what we can forgive.

2.) Pray for willingness to forgive the rest.

4.) Don’t be surprised if we remember more old offenses or if new offenses occur. Deal with them one by one. Recycle points 2 and 3 above.

Even when there have been many offenses, there may be only one occasion when the forgiver talks with the other person about forgiving, and maybe not even one. But even if there are more opportunities, they should often be avoided because they aren’t necessarily constructive to the other person. The Lord will guide our forgiving of his or her sins against us. The essential element of forgiveness is our heart attitude, not the words spoken to the other person, important as those words may be.

When we’re wounded the second time, our feelings are probably going to be similar to the feelings we had the first time. And are likely to be even more intense. But these feelings don’t mean we never forgave the first time. The feelings aren’t wrong and they don’t necessarily indicate we have done wrong. We control our behavior and ultimately resolve unpleasant feelings by a process. This involves forgiving, and that begins with an act of the will.

Richard Walters wrote the content of the article posted above. Unfortunately, the book, which this article was edited from, FORGIVE AND BE FREE— Healing the Wounds of Past and Present is no longer being printed.

2 responses to “Freedom From Resentment”