“Marriage becomes a series of surprises for most of us, and one of them is how frequently we need to forgive and be forgiven.” (From the book, “The First Years of Forever” by Dr Ed Wheat) 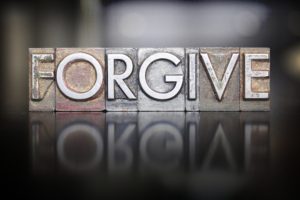 In our many years of marriage we’ve had to give the gift of forgiveness to each other more times than we care to count. It has never been easy, but we both know that if we hadn’t “forgiven as Christ has forgiven us,” our relationship wouldn’t have lasted and wouldn’t have grown to be as good as it is today. That’s why we’re sharing thoughts on this important issue for you to prayerfully consider.

PLEASE NOTE: This is not a “how to” message. That’s something that the Lord will show you “how to” do through the working of His Holy Spirit, and possibly through the articles we’ve linked to in this message as you seek His help. But rather, this is a message of “why to” and the “need to” —a type of wakeup call for those who are harboring bitterness of some kind against a spouse.

“Forgiveness is a key element in healthy marriages. Forgiveness is the oil that lubricates a love relationship, and it’s an oil we need daily. Forgiveness is not a one-time event; it’s an attitude of wanting to partner with your spouse in spite of his or her imperfections and irritations” (David and Claudia Arp).

And there sure are a lot of “imperfections and irritations” that surface in marriage! It’s a natural progression.

“Any relationship of humans will have problems because humans are problems. A fundamental truth is that every marriage experiences pain and heartache. Due to sinful human nature, ‘fumbling’ in a marriage is ordinary and commonplace. Hence, misundunderstandings and disagreements are unavoidable and inevitable even in healthy, satisfying marriages.

“The simple truth is that spouses do things they should not do and neglect to do things they should do. In a marriage, normal problems occur because no couple ever communicates perfectly, resolves all disagreements harmoniously or achieves ideal emotional closeness. Unfortunately, the most serious hurts typically happen within the context of close interpersonal relationships, creating a tragic irony of being hurt by and of hurting those who are loved most deeply. When wrongs or sins are not healed by prompt apologies and forgiveness, a couple may drift apart, experience relationship deterioration and perhaps be in danger of dissolution. (Randall Schroeder, PhD, from the article, In the Image of God: The Christian Vision for Love and Marriage)

Dr Neil T Anderson tells of a counseling session he had with one couple in which they “made enemies of each other. Forgiveness was the furthest thing from what they wanted to discuss.” Have you been there (even in the moment)? We sure have. And yet we have learned, just as Dr Anderson knew, they needed to forgive for healing to have a chance to begin. After listening for a while, he finally told them:

“They were stunned. They hadn’t connected their marital troubles with how they were doing in their individual relationships with God. But the Bible is clear: ‘If someone says, ‘I love God,’ but hates a Christian brother or sister, that person is a liar; for if we don’t love people we can see, how can we love God, whom we have not seen?” (1 John 4:20, NLT). (From the Today’s Christian Woman article “Why Forgive?”)

In this article, Dr Anderson goes on to tell reasons you must forgive each other. The shortened, basic reasons are (which you can read more of on the Marriage Partnership web site link above): “to help us to mature in our faith” and “to keep bitterness away,” which is true. As difficult as it is, resentment will negatively change and discolor everything in your life and will ultimately destroy whatever good there can be within your marriage.

Ministers, Mike and Wanda found that out (as many of us do) —the hard way. Maybe you can relate somehow:

“We learned early on that forgiveness was a must if our marriage was going to survive. After all, neither of us is perfect, so what right does either of us have to withhold forgiveness from the other person? No right at all. Especially once we really understood the grace and forgiveness that was extended to us by Christ Jesus. Because of the forgiveness we have received, God commands us to forgive others. That is, if we want our sins to be forgiven” (from the Christian Marriage Today online article, 6 Christian Marriage Tips).

And we all want grace and to be forgiven, don’t we? And yet we still find it difficult to forgive as we’ve been forgiven. But the truth is, if we don’t extend the same grace we want to receive and we keep clinging onto unforgiveness, it has the potential to destroy us and our marriage.

“Bitterness, I believe, is the number one killer of our marriages. Many would object and say it is differences on money or incompatibility, but these people do not understand how bitterness is a root problem to these and many other marital difficulties. It is this bitterness, which step by step separates the couple from each other and lessening their commitment to each other.

“God wants to bring healing to your marriages. He wants to eliminate all resentment. Part of our problem is that we don’t understand how He has already given us the tools to snap the intimidating influence of bitterness in our marriages through the wonderful power of the Gospel. That little stone that God used in David’s hand is much like a special tool that God has given to His children to take down the threatening giant of bitterness. When we in our simple faith and obedience respond, we see God’s powerful love bring down all the walls of resentment.

“…Anyone who has been infected by bitterness knows that it can be so dominating that all of whole life is influenced by it. All sorts of physical and emotional symptoms pop up including lots of stress-related pains and diseases. But it doesn’t stop there. Bitterness starts by destroying relationships. It starts so quietly, though.

“Here are some possible symptoms of a breakdown in a relationship due to bitterness: rolling your eyes, ignoring simple requests, easily irritated, calling names in ‘fun,’ criticizing spouse’s efforts, jest about shortcomings, feeling put out.

So many marriages have been destroyed by not following the instruction, “Let all bitterness and wrath and anger and clamor and slander be put away from you, along with all malice. (Ephesians 4:31)

“Bitterness should not be accepted in our personal lives. If we refused to tolerate it, then it would not plague our marriages. Bitterness eats away from the goodness that God has given to us in marriage. Why have so many couples accepted some degree of bitterness in their marriages? Some have never thought about how bitterness is related to their troubled marriages. Others know of it but are so committed to destroying the other that they are willing to put up with the suffering.” (Paul Bucknelll, “Replacing Marital Bitterness with Forgiveness”)

Yet God told us and has shown us the importance of forgiving.

“Having shown us the basis of God’s forgiveness in the cross, Paul says in Colossians 3:13, ‘As the Lord has forgiven you, so you also must forgive.‘ In other words, take the grace and forgiveness and justification that you have received vertically through the death of Christ and bend it out horizontally to others. Specifically, husbands to wives and wives to husbands… Why the emphasis on forgiving and forbearing rather than, say, an emphasis on romance and enjoying each other? …Three answers:

1. Because there is going to be conflict based on sin, we need to forgive sin and forbear strangeness, and sometimes you won’t even agree on which is which;

2. Because the hard, rugged work of forgiving and forbearing is what makes it possible for affections to flourish when they seem to have died;

3. Because God gets glory when two very different and very imperfect people forge a life of faithfulness in the furnace of affliction by relying on Christ.” (John Piper, from sermon excerpt, “Marriage: Forgiving and Forbearing”)

All of these are very important reasons, especially the testimony it gives to the world concerning giving the gift of forgiveness and grace and especially the glory God receives as a result.

Please know though, that we are not trying to minimize the strain and sacrifice it takes to forgive a spouse that has deeply hurt you —quite the contrary. We know it is one of the most difficult things you/we will ever do. But we know that without it, you will not gain freedom from the prison that bitterness can inflict upon you personally, and other innocent people as well. That’s why we put together more on this subject in the Bitterness and Forgiveness topic of our web site that will help you to sort out and walk through what forgiveness is and what it isn’t, as well as additional reasons why you will gain freedom as you forgive.

Giving the gift of forgiveness is the last thing we want to give, when we have been injured in some way. But in the long-run, as you walk the journey to releasing what you might consider to be your “right” to hurt the offender (which is often your spouse) for hurting you, God does a work of redemption that you are most able to benefit from and eventually embrace.

Marriages heal when we stop looking at what our partner should do and instead look at what we need to do. And the first step is to forgive as we’ve been forgiven (not excusing or enabling, but forgiving) —looking to Christ as our example. He is the One who can give us the power to “set the captive free” and will later reveal that the captive was us all along —because of the damage that an unforgiving spirit can do within and all around us to everyone whose lives we influence.

For the glory of God and the good of your marriage, we urge you to work at forgiving,
Cindy and Steve Wright