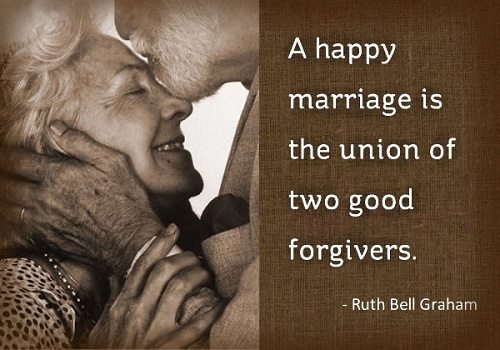 Sometimes it’s difficult to forgive each other in marriage. So actions can separate us. But it is important to find a way to forgive the apologizing spouse.

“Marriage becomes a series of surprises for most of us, and one of them is how frequently we need to forgive and be forgiven. (Dr Ed Wheat)

To finish up with this 3 part series (with Marriage Messages #324 and #325 being the first two) on apologizing and forgiving, we’d like to give you a few quotes on the subject of bitterness that center on some of the reasons why we need to forgive each other. There isn’t a marriage around in which spouses don’t offend each other at different times in their relationship. And for that reason, forgiveness becomes all the important to both spouses in helping the relationship to survive. The following are a few additional reasons:

— “We give forgiveness because God tells us to ‘forgive as we’ve been forgiven.‘ Only if you have no need for forgiveness yourself do you dare consider hesitating to forgive another. The two go hand in hand. ‘If you forgive other people their failures, your Heavenly Father will also forgive you. But if you will not forgive … neither will your Heavenly Father forgive you your failures.‘ (Matthew 6:14-14)

“George Herbert once wrote, ‘One that cannot forgive others breaks the bridge over which all must pass if they would ever reach heaven; for everyone has need to be forgiven.’ Forgiving and being forgiven are all of one piece. They cannot be separated. In giving we receive. In accepting those who injured us we open ourselves to God’s acceptance.” (David Augsburger, “The Freedom of Forgiveness”)

— “Following Christ means that we must learn to forgive those who most offend us. Why our enemies? God knows how much unresolved anger kills the spirit within. He wants us to be free from regret and guilt. No one is to be excluded from our forgiveness, even the person who is not asking for your forgiveness.” (Nancy Cobb and Connie Grigsby, “The Politically Incorrect Wife”)

Another reason we forgive others, isn’t so much for our spouse’s sake, but for ours, because of the destructiveness that resentment can cause US as we hold onto it. Below are a few things that others say on this subject that might help you on this issue:

— “Resentment is like drinking a glass of poison and then glaring at your offender as you wait for him to die. Resentment is self-destructive, which is another reason we must forgive. We have no more right to harm ourselves than to harm anyone else made in God’s image. It’s not that the other person didn’t do something wrong. It’s that if we aren’t careful, their wrong can take ownership of our hearts and minds.

“In a very real way, resentment allows another to own part of you. Resentment can become an obsession. It can steal your joy and ability to see clearly. When it comes to your marriage, you need all the clarity you can get. The call to forgive is also a path to your own freedom.” (Paul and Sandy Coughlin, “Married But Not Engaged”)

— “When you don’t forgive, you permit your enemies to live rent free in your head. Evict them today.” (Lee Ezell)

— “Keep a sharp eye out for weeds of bitter discontent. A thistle or two gone to seed can ruin a whole garden in no time.” (The Message, Eugene Peterson, Hebrews 12:15)

— “Forgiving is letting go of the past, but not in the sense of forgetting what happened or disconnecting myself from the pain. Forgiveness is refusing to allow the past to be the sole determinant of life’s course.” (Myrla Seibold, from an essay titled, “When the Wounding Runs Deep”)

There is No Doubt:

— “Forgiveness is not easy, especially when the hurts are ongoing. Forgiving can feel like giving up a part of yourself. It’s hard to underestimate the power of forgiveness in a marriage. It can be a source of wonderful freedom because when you choose to forgive, you release new energy and vitality in yourself. It also provides a model of how you want your [spouse] to respond to you when you stumble or fall. And perhaps the best reasons for forgiving are that God asks us to do so and because He has forgiven us first: ‘Be kind to one another, tender-hearted, forgiving each other, just as God in Christ also has forgiven you.'” (Dr Steve Stephens and Alice Gray, “The Walk Out Woman”)

We’ve got so much more we’d like to share with you in this Marriage Message on this subject, but in this limited space we can only scratch the surface. Additional quotes and articles are posted on our web site under the topic of Bitterness and Forgiveness. We especially pray that you will extend to each other the same grace you expect and want God to give to you.

In closing we hope you will read and pray the following prayer, written by Stormie Omartian in the book, The Power of a Praying® Wife. It can be used by both husbands and wives.

“Help me not to hold myself apart from [my spouse] emotionally, mentally, or physically because of unforgiveness. Where either of us needs to ask forgiveness of the other, help us to do so. If there is something I’m not seeing that is adding to this problem, reveal it to me. Help me to understand it. Remove any wedge of confusion that has created misunderstanding or miscommunication. Where there is behavior that needs to change in either of us, I pray You would enable that change to happen.

“As much as I want to hang on to my anger toward [my spouse] because I feel it is justified, I want to do what You want. I release all those feelings to You. Give me a renewed sense of love for [my spouse] and words to heal this situation. Amen.”

We pray this series has ministered to you,