“The most important skill in maintaining unity as a couple is forgiveness. You’ll undoubtedly make mistakes, disappoint one another, and make some poor decisions. The only way to keep the relationship growing in the midst of our humanity is to forgive.” (Bill and Pam Farrel) 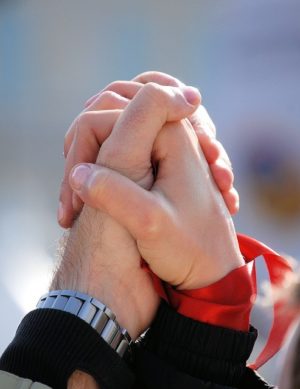 We’re told in the Bible to, “Bear with each other and forgive whatever grievances you may have against one another. Forgive as the Lord forgave you” (Colossians 3:13). Those are tough words to think about, but even tougher to do. It makes no sense when we’ve been deeply hurt by our spouse, to forgive him or her, even though we’re told we should.

On this matter, Neil Anderson wrote an article for the former publication, Marriage Partnership Magazine, titled, “Why Forgive?” In it Dr Anderson counseled with a married  that had “made enemies of each other and forgiveness was the furthest thing from what they wanted to discuss.” He listened intently to their back and forth accusations and then finally said to them:

He then wrote the following, concerning their reaction and more. He said:

They were stunned. They hadn’t connected their marital troubles with how they were doing in their individual relationships with God. But the Bible is clear: “If someone says, ‘I love God,’ but hates a Christian brother or sister, that person is a liar; for if we don’t love people we can see, how can we love God, whom we have not seen?” (1 John 4:20, NLT).

What makes a Christian marriage work is to forgive from our hearts, just as Jesus forgave us. He did so by taking our sins upon himself. For us, forgiving others means we’re willing to live with the consequences of our spouse’s sins. But why forgive?

1. To help us mature in our faith. God’s intention in marriage is that we hang in there and grow up. In Colossians Paul writes: “Bear with each other and forgive whatever grievances you may have against one another. Forgive as the Lord forgave you” (Colossians 3:13).

It’s in the context of committed relationships where we either learn to be kind, patient, and loving, or we blow apart. Loving each other inevitably means that we forgive each other —and keep on forgiving as Jesus instructed in Matthew 18:21-22. When Peter asked Jesus how many times we should forgive someone, “Up to seven times?” Jesus answered, “I tell you, not seven times, but seventy-seven times.”

Yes, you may be tempted to keep a written log of how many times you’ve forgiven your spouse! But Jesus was really saying we need to forgive as many times as we are offended. It may seem unfair, especially when we feel as though we’re the ones always doing the forgiving. Yet, forgiveness calls us to grow in character, which is ultimately most pleasing to God.

2. To keep bitterness away. In the close confinement of our homes, we’ll say or do things that are offensive to our mate. Even the best of us will feel hurt, put down, or rejected. But if we let a root of bitterness spring up, the writer of Hebrews says that it will “defile many” (Hebrews 12:15).

Our unforgiveness grows to bitterness and affects everyone. It erupts in anger and brings disease, stress, and pain. Bitterness is like swallowing a bottle of poison hoping the other person will die.

Excuses, excuses: So many times we know we should forgive, we understand what God says about the importance of forgiveness, but still we fight it. Here are some excuses I hear from couples:

• It’s not fair. Of course it isn’t, but we all live with the consequences of another person’s sin. For instance, we’re stuck with the consequence of Adam’s and Eve’s sin. And on the marriage front, since it’s God’s will that we remain married, the only real choice we have is whether we want to live out those consequences of our spouse’s sin in the bondage of bitterness or the freedom of forgiveness.

• But you don’t know how bad he (or she) hurt me! That’s not the issue. Your spouse may still hurt you. But forgiveness is how you stop the pain.

• I have to heal first —then I’ll be able to forgive. Research shows over and over that forgiveness brings healing, not the other way around.

• But I want revenge! The writer of Hebrews reminds us, “For we know him who said, ‘It is mine to avenge; I will repay'” (Hebrews 10:30). We have to trust that God will even the score and make things right [Even though He may not do it in our lifetime].

• Why should I let him (or her) off the hook? If you don’t forgive, you’re still hooked to that offense. You’ll gain freedom from the past if you let your spouse off your hook. But remember, your spouse isn’t off God’s hook.

• Where’s the justice? It’s in the cross. Jesus died for your sins, and my sins, and his sins, and her sins.

“I’ll just try to forget about it, because God forgot my sins.”  True, God remembers our sin no more. But we can’t just will ourselves to forget. I like to think we remember because we can learn from it. The most important part of “forgetting” our spouse’s sin is that we don’t take the past and use it against our spouse —just as God doesn’t use our sins against us. The one who keeps bringing up past offenses hasn’t forgiven.

“I’ll keep forgiving even though he never changes, since that’s what Jesus calls me to do.”  Yes, Jesus asks us to forgive over and over, but he never asks us to put up with wrong behavior. When Jesus forgave, he told the person, “Go and sin no more.”

Part of offering grace is to set clear-cut boundaries that protect us from further abuse. Forgiving from our heart isn’t being a punching bag. Although the Lord forgives, he doesn’t tolerate sin, and neither should we.

True forgiveness: The closer we connect to God and understand the forgiveness He has given us, the more able we are to forgive our spouse.

Remember, you’re the only one who can keep yourself from being the person and spouse God created you to be. We don’t just forgive the other person for his sake; we forgive for our own emotional, physical, and spiritual health.

If you’ll assume responsibility to grow in Christ, and forgive those around you, the family can be the kind of environment where everybody wins.

To read the above article in its entirety plus steps given by the author on how to forgive, please google, “Why Forgive” written by Everett L Worthington Jr.

And then to read more on this issue, please go to the “Bitterness and Forgiveness” topic of this web site. There’s a lot more to forgiveness than you may think.

We pray God richly blesses your marriage as you work to forgive each other for every offense, so you grow closer to God and closer to each other.