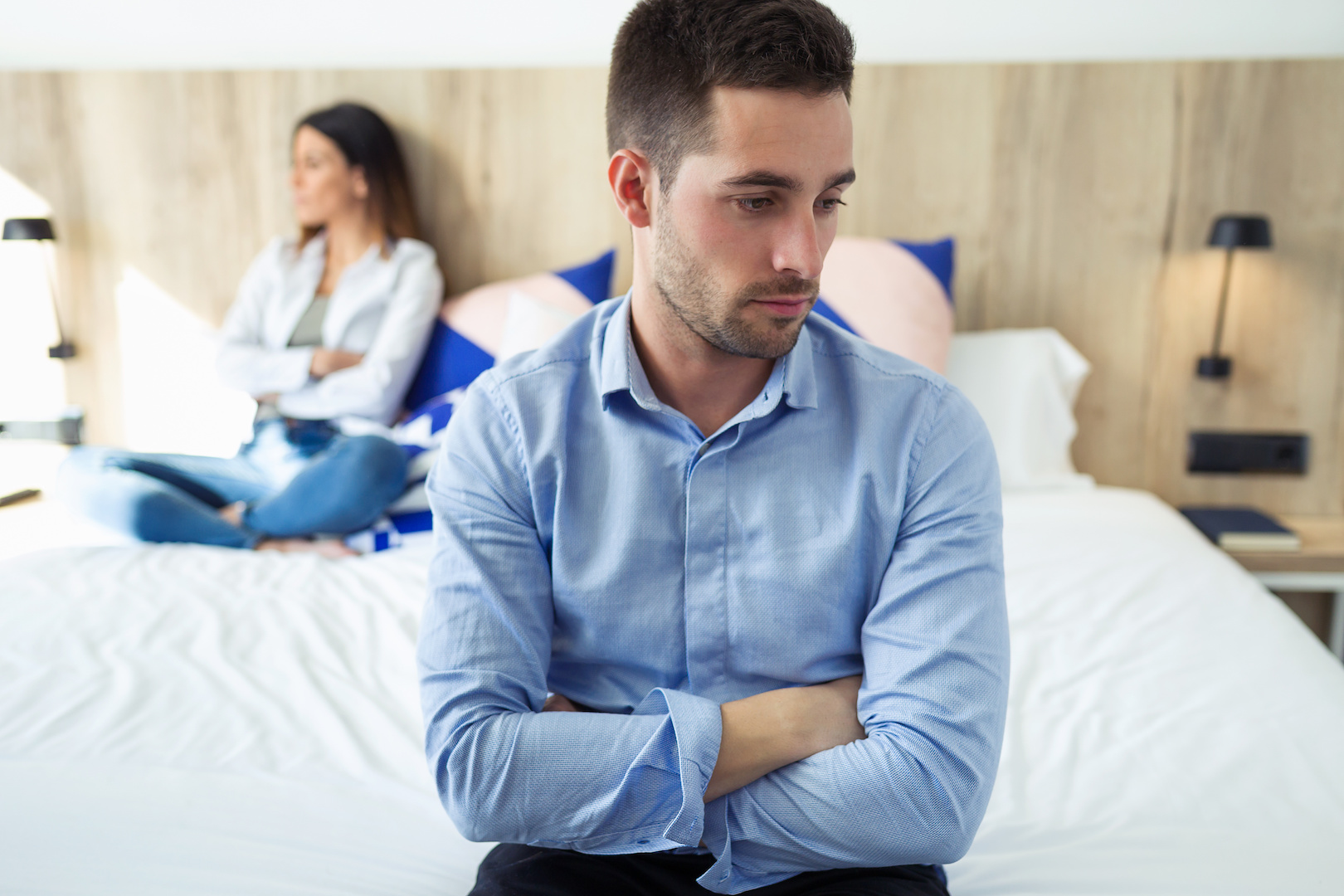 When we’re told to “not let the sun go down on our anger” does that mean if we’re arguing about something and it’s getting late, we have to stay up until it’s resolved? Not necessarily. But what about going to bed angry? How can you get away from that one? If the issue isn’t resolved how can you help but go to bed angry?

We struggled with this one for years. And we didn’t always handle it well. But eventually God gave us wisdom into how to approach this dilemma. It’s a matter of “putting aside” your anger and being wise in the timing of how you deal with the issue at hand.

Ron and Judy Blue give this insight:

“Settling disputes is never fun. It takes hard work and a mutual commitment to problem solve. It can also take time. If you haven’t reached an agreement by bedtime, put the matter aside with the understanding that you will resume discussion the next day. As Ephesians 4:27 warns, holding on to anger overnight gives the devil a foothold on your life. Don’t leave yourself (or your marriage) vulnerable.”

That was our conclusion, as well. It’s not that we’re not committed to settling the issue. And it’s not that we go to bed angry. We have learned WHEN to settle an argument, and WHEN it’s best to set aside our anger.

Pastor Mark Gungor, in his blog, It’s Okay to Go to Bed When You’re Angry agrees. Yet he points out something important to note about this issue:

“For years most of us have heard the saying, ‘Never go to bed angry.’ It comes from the scripture in Ephesians 4 where Paul writes: …do not let the sun go down while you are still angry. Often people will interpret that to mean they cannot go to bed until they have settled every last detail of the argument. Couples will stay up till the wee hours of the morning hammering at the issues —and each other —trying to get to a resolution.

“I’m sure the verse does not literally mean don’t go to sleep until you’ve completely solved the problem in a way that is totally acceptable to both of you. What it does mean is that you need to let go of the anger, even if the problem is not solved.”

It’s a matter of “self control.” And isn’t that in the Bible too?

Are You Going to Bed Angry?

After praying about it, Steve and I also believe the above scripture doesn’t mean that EVERYTHING has to be settled then and there. But rather, it’s a matter of putting into place a a more peaceable beginning to an end of the squabble.

We now no longer suffer from late night fights and sleepy days afterward. If we’re arguing and it’s getting late, we’ve learned (after much practice) to stop. We then agree to visit the matter again at a mutually agreed upon time. We put away our anger (which takes a lot of discipline), and put our minds on something else for a time. This helps to defuse matters for a period of time so our anger isn’t escalating deeper into the night. As a result, we can then go to bed more peaceably.

We still may not be “happy” with each other yet. But by using this method, we can then “not sin” in our anger and can settle the matter later in a healthier way. Timing IS important when it comes to settling emotionally charged issues.

Not Going to Bed Angry

We’ve learned that we just can’t resolve the conflicting issue in a healthy way when we’re tired. It works better for us to work it through when we approach it from a fresh perspective. This goes along with something that Lauren McRae wrote:

“They say to ‘never go to bed angry,’ but dealing with conflict while sleep-deprived can be a recipe for disaster. Tired couples may find themselves arguing more than when they are well-rested. One reason for this is that sleep deprivation not only makes your body feel less vibrant, it also affects the way that you think. The effects are more than the typical neural slow-down. It’s not just that a tired person won’t be able to make a quick rebuttal. The danger lies in the fact that the brains of sleep-deprived people work differently. If two people begin in an argument in a state of sleep-deprivation, it may be more challenging than usual to find a solution.” (From the article, “The Impact of Tiredness on Marital Conflicts”)

This is backed up by something Theresa DiDonato Ph.D. discovered in her research:

“New evidence suggests that relationships suffer from worse romantic conflicts when just one member of a couple is sleep-deprived (Gordon & Chen, 2014). People who sleep poorly tend to display more negative emotions. And they are less successful at conflict resolution. Since it’s normal for couples to disagree on occasion, this finding suggests that a lack of sleep might accentuate disagreements. It can introduce needless stress into otherwise happy relationships.” (From the Psychology Today article, “Why Your Relationship Depends on a Good Night’s Sleep”)

So be aware of this when you’re tempted to argue into the night over a conflicting issue. Tiredness can complicate your ability to resolve conflicts.

Nursing the Anger All Night

The hard part is not stewing further over it into the night. It’s easy to  nurse the hurt and rehearse what it “seems” important to say. That’s been especially difficult for me. But I can testify that it CAN be done. It’s essential to put intentionality into learning how to do it.

God tells us in His Word not to let “bitterness take root.” (Hebrews 12:14-15) The importance of growing up is also emphasized in scripture. It’s a matter of “putting childish ways behind.” (1 Corinthians 13:11) We are to put away selfishly wanting things resolved OUR way. It also goes along with not being “anxious about anything.” (Philippians 4:6) We are to realize that “love is patient” (1 Corinthians 13:4) —patient enough to wait until it’s a better time to work through problematic issues.

I/we realize all of this is easier said than done. But so is most things that are important. And this IS important!

Steve and I have also learned that it’s important NOT to bring up a shaky subject when it’s getting late. Save it for later. We instead look for a better time. We try to be aware of H.A.L.T. Times —which would be times when either spouse is Hungry, Angry, Lonely, or Tired. There’s more vulnerability to be less tolerant when those situations are in place.

There’s something else that has helped us. For decades we have prayed together every morning. And because we can’t pray together when we’re angry (our conviction), we need to resolve things sooner, rather than later. There’s not much space there for carry-over anger.

And yet, after all of that, if we still can’t seem to come to a complete agreement, we’ve learned to do what Pastor Gary Inrig and his wife have done. He wrote, “we can’t always solve the problem. But we always affirm our commitment to ‘us’ and seek to resolve the issue or defang it.”

So, if you’re able to make it work somehow, it can be okay to go to bed before every argument is resolved as long as you and your spouse can temporarily let go of your anger. Then revisit the issue at a time when you can better achieve a more peaceable resolution. If you can’t, then put on the coffee. You probably have a long night and a pretty tired next day ahead of you. :)

To better help you with this issue of going to bed angry, you might consider doing the following:

“Set aside a time together in a comfortable spot free from everyday distractions. Together, plan out a practical strategy for not ‘letting the sun go down on your anger’ with one another. Make a commitment to each other to follow the plan. Pray together, asking God to help you to honor Him by the way you choose to resolve conflict with each another.” (Leslie Snyder)

Concerning this matter, below are a few scriptures to keep in mind:

“There is a time for everything… a time to be silent and a time to speak.” (Ecclesiastes 3:1,7)

“A fool gives full vent to his anger; but a wise man keeps himself under control.” (Proverbs 29:11)

“Starting a quarrel is like breaching a dam. So drop the matter before a dispute breaks out.” (Proverbs 17:14)

“Let us therefore make every effort to do what leads to peace and to mutual edification.” (Romans 14:19)

We hope this helps in some way,

If you are not a subscriber to our Marriage Insights (emailed out weekly)
and you would like to receive them directly, click onto the following:

3 responses to “Going to Bed Angry?”