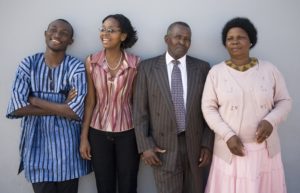 The underlying factor in establishing a proper postmarital relationship with parents and in-laws is in learning to prayerfully submit to the Scripture. It says: “for this reason a man will leave his father and mother and be united to his wife, and they will become one flesh“ (Genesis 2:24). It will help you to cut “the ties that bind.”

As grateful as a man may be for the guidance and help he has received from his parents, it is imperative for the well-being of all concerned that he understands the importance of heading up a whole new separate decision-making unit. In the same way, the wife must play her part in disallowing her parents from making undue demands on her time and affection. That is because she is now under the headship of her husband.

It is not that in-laws deliberately set out to cause problems. In most cases, they would be mortified to think that their actions were viewed in that way. But unless care is taken to ensure that there is a clean break —emotionally and financially and in every other way —then untold harm may well be the result. Their “ties” to your life may be unhealthy.

In The Other Woman in Your Marriage, Norman Wright quotes a fine illustration of cutting the apron strings.

I’ll never forget the wedding of one of my best college friends, John Engstrom, years ago. Actually it wasn’t the wedding itself that impressed me as much as something that happened at the rehearsal dinner. Mrs. Engstrom, John’s mum, was seated at the front table with John, his bride, and the bride’s parents.

At a particular time at the dinner, Mrs. Engstrom stood up and pulled out a beautifully wrapped box. She unwrapped it. And with great ceremony she displayed one of her favorite old aprons.

Holding the apron high for everyone to see, she reached into her purse and brought out a big pair of scissors. With a flourish, she snipped off the ties and apron strings. She then handed them to John’s bride-to-be.

“Never again,” she said, “will I have the same place in John Engstrom’s life. You are now the woman in his life.”

Releasing in Front of Witnesses

It was a moment of formal releasing, in front of many witnesses. And the most significant witnesses of all were a young bride and groom. It was a profound moment —but a joyful one too. There was a feeling of rightness about it all.

This article comes from the book, Lasting Love: How to Avoid Marital Failure

written by Alistair Begg, published by Moody Press. In this book Pastor Begg teaches the art of a lasting relationship. As Alistair says about this book,“This is an attempt at preventive medicine. It is written primarily for those who are contemplating marriage from the vantage point of singleness. It’s also for those who are in the early stages of married life, or who have enjoyed a number of years of marital bliss. However, it may also prove helpful to those who are already dealing with the effects of decay. In a sense, this book is, unashamedly, ‘Marriage for Dummies.’ It is a refresher course on basics, and hopefully you will find it to be much more.”

To read another article that is related to in law ties, please click onto the following Focus on The Family link:

• HOW CAN I CUT MY SPOUSE’S APRON STRINGS?

Tagged: dealing with in laws, leave and cleave