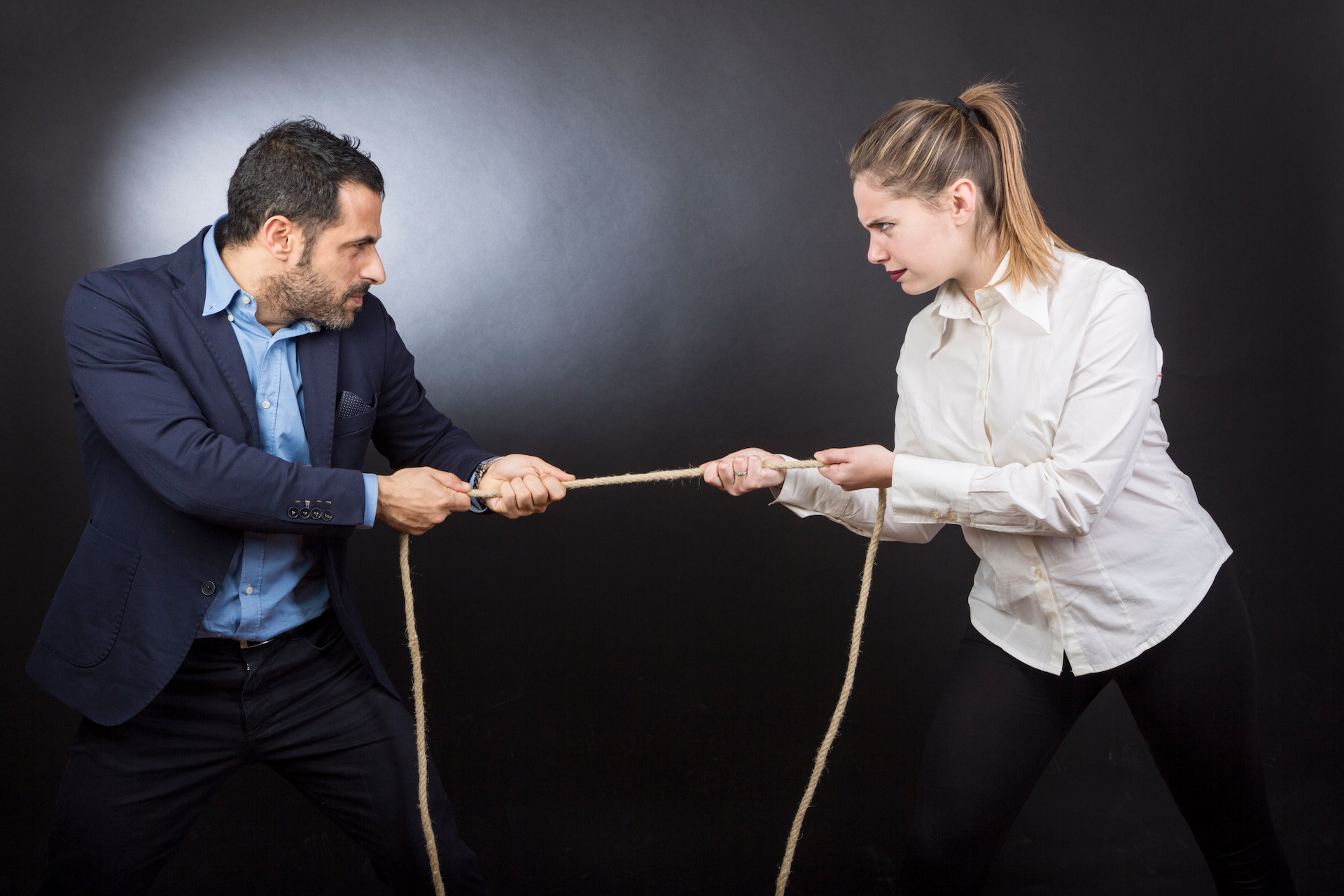 Are you dealing with any tug of war issues in your marriage—where you’re trying to get each other to come to your way of thinking and behaving? Who hasn’t, right?

The term “tug of war” is defined as: “A contest of strength in which two teams tug on opposite ends of a rope, each trying to pull the other across a dividing line.” The objective, of course, is to pull the other over to your side. In a marital tug of war, we want our spouse to come to our way of thinking and “behaving”.

There are SO MANY issues that come up that can cause that tug and pull at each other in marriage. We all have them. You’re both sure you’re right in your approach to a certain matter and that’s when you get into an emotional tug of war with each other.

But the important thing is how you handle those issues. When and how do you “drop the rope” for the sake of your marriage?

We’re only going to touch on three of the multitude of issues you could be battling with each other in your marriage (in laws, children/stepchildren, and politics—yes, that’s right, politics). But we’ll give you links to even more, helpful info. The rest is up to you.

However, we encourage you to first watch the following You Tube Video. It’s a short one, but it’s also very impactful. This will set up the direction we’re going here. Please watch:

Okay; so, here’s the first tug of war issue we want to touch on (because it can be a biggie):

The In Law Tug of War

In law problems can be a HUGE issue we hear about quite often. You both (usually) love your parents and it’s especially troublesome when there is conflict between them and your spouse. As a result, that can cause a tug of war in your heart as well as in your varying approaches to the problem. So, what can you do?

Obviously, there is not a “one-size-fits-all” approach to in law issues (or most any issue). But here are a few tips, from which you can glean. We encourage you to pray, read, and figure out what you can use. You can disregard the info that won’t work for your marriage or adapt it so it does. Just try to be open and creative.

“God’s first commandment related to marriage in Genesis 2:24 is that we must ‘leave our fathers and mothers.’ The word ‘leave’ doesn’t mean that we forsake or neglect our parents in favor of our spouses; it simply means that our marriage has priority above them. In fact, not only must we give our marriage priority above our parents, we must do the same in every area in life, with the exception of God.” (Jimmy Evans)

Severing past dependency ties once you say “I do” is important to your spouse and to God. But what if you have problems in dealing with your parents and/or in laws?

“Don’t place blame; just look from the outside at the impact the friction is having on your marriage. Ask for clarification. See what your spouse is feeling or sensing. Be open. You don’t want to cast blame and get into another argument; instead, you want to get insight into it from each other’s perspectives. Then you can say, ‘Can we perhaps set one boundary with your mom (or with my folks)?’ Take it one step at a time.” (Rosberg, from the article, “In-Laws Causing Issues?)

“There are two keys to dealing with an in-law. First, you and your spouse must be a united front. Agree together on your boundaries. Agree on how you will present these boundaries and what you’ll do when your boundaries are broken. Second, it’s always, always, always the job of the child of the in-laws who deals directly with them. If it’s your mom and dad, you deal with them. So, as a couple, develop your plan and boundaries. But the child of the parents takes ownership and delivers these boundaries.

“When your boundaries are broken, you two talk it over and the child of that in-law contacts the person. If a difficult in-law continues to cause real problems and will not change, pull back from that person. You may have occasional contact, but it will be brief. To continue to spend regular time with an abusive in-law does serious harm to your marriage and to your kids. Make it clear that you expect a heartfelt apology and changed behavior before you will re-enter the relationship.” (Dr David Clarke)

“If you’re a Christian, you owe your in-laws behavior that’s consistently Christian in character—as you do anyone else. This doesn’t ignore the reality that if your in-laws are ‘difficult’ people, are controlling and manipulative, are emotionally or mentally dysfunctional, or don’t share your faith, this may be a particularly hard challenge. The problem is that they’re not just anyone. They’re connected to your spouse through genetics, history, and complex psychological dynamics.” (From Focus on the Family article, “How to Better Live with Your In Laws”)

Again, please know that your spouse loves his/her family. So, try to give grace whenever you can. Sometimes you need to talk through important in law issues. But other times, here’s another wise approach:

“When you’re confronted with what feels like a no-win situation involving an in law, use the ‘drop the rope’ theory. Imagine a rope, the kind used in tug-of-war. If you find yourself provoked, see that rope in your hands. You can choose to continue yanking on it—or drop it. Dropping it may sound as though you’re giving in or giving up, but it’s actually empowering. It’s also much more effective than tugging back and forth.” (Romie Hurley)

Just be very prayerful about all of this. Above all:

“Never let a problem to be solved become more important than a person to be loved.” (Barbara Johnson)

And for even more help here are linked articles that could lead you to other great suggestions. We encourage you to read:

And then, the following links lead you to additional linked articles you could find very useful:

• DEALING WITH IN LAWS AND PARENTS

Children / Stepchildren: Another Tug of War Issue in Marriages

Now, maybe you don’t have children that you’re dealing with or will deal with in your marriage. But we’re sure you know of many others who are. If so, you might pass on the following info to them.

However, if you are dealing with children in your family, please consider the following points (with links to more helpful articles).

“Having children not only opened a new chapter in my husband’s and my life; it also opened a whole new can of worms. Many of our heated discussions have taken, take, and will probably continue to take place over parenting issues. The quicker you come to terms with it being ‘ok’ that your spouse doesn’t parent the same exact way you do, the less heated your discussions will become. It’s not as though your 6-month-old will turn 16 on his/her next birthday; but the sooner you and your spouse flesh out expectations for various parenting situations (when your child gets a cell phone, when they can date, when they can drive or get a car, when they can go on a sleep over…) the better.

“It’s of the utmost importance to form a strong parenting team ready to tackle parenting situations if you don’t want your children to come between you and your spouse. It’s also extremely important to be proactive on the parenting front, foreseeing possible issues so you can avoid reactive parenting.” (Lisa Graf, from her article, “Turning Down the Heat”)

To work through this:

“Hold to the fact that you’re married for life and the children are merely passing through. Placing a high value on pleasing your spouse rather than a child can greatly improve your odds of having a happy marriage over time. That’s a win for both of you. Also, realize that each time you override your spouse’s preferences, feelings or values, you override his or her trust, making future decisions even more difficult because the marriage unity has eroded. That’s a loss for both of you!” (Robert S. Paul, from his article, “How Couples Can Agree on Parenting Issues”)

Now, here are some links to articles that can give you additional insights concerning this tug of war issue:

• WHEN YOU DON’T AGREE WITH YOUR SPOUSE ON CHILD-REARING

The following is a secular article but it’s a very, very good one and lines up biblically:

• WHEN PARENTS DISAGREE HOW TO PARENT AS A TEAM

Also, there are several articles in these topics that deal with parenting and stepchildren issues:

And then briefly, here’s another Tug of War issue many spouses’ encounter:

Oppositional Subjects, such as Politics

Politics is a HUGE issue where many spouses find themselves in an oppositional tug of war. We thank God repeatedly that we’re on the same page concerning political issues; but many spouses are NOT! It causes all kinds of cracks in their relationships; and some marriage relationships don’t survive from the fights that crack their relationship wide open. That’s why we encourage you to read:

We realize that there are many, many more oppositional issues that could cause a tug of war between you. But we’ll have to talk more about other oppositional subjects at another time.

Above all, talk to God and talk to each other, and seek godly wisdom whenever it’s needed. Remember:

“By wisdom a house is built, and through understanding it is established; through knowledge its rooms are filled with rare and beautiful treasures.” (Proverbs 24:3-4)

Tagged: children and marriage, dealing with in laws, disagree as parents