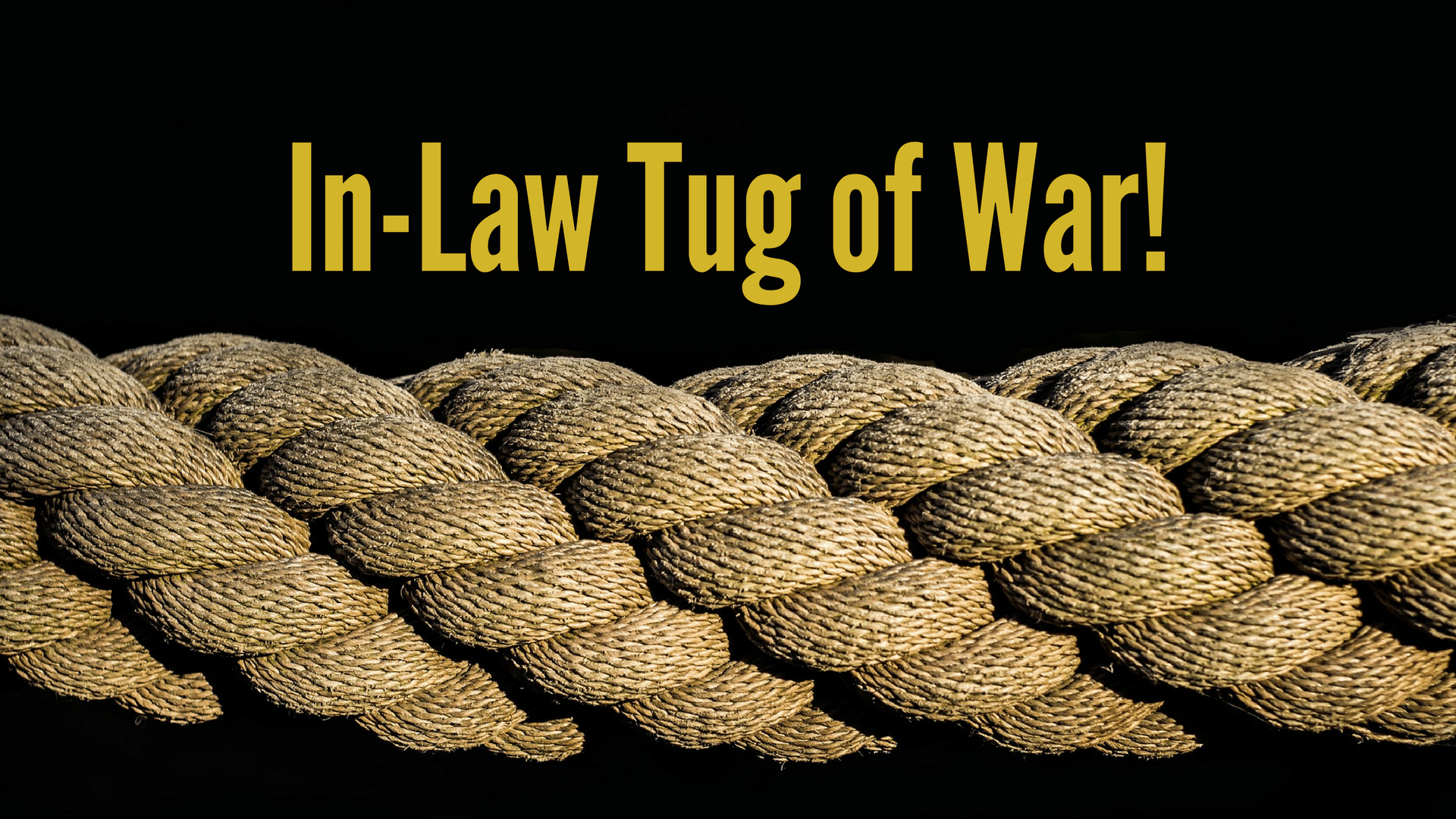 Do you feel like there’s a “tug of war” going on between you and your spouse, your parents, and your in-laws? And do you feel like somehow you’re caught in the middle? This in law tug of war can be a serious one.

When you marry, you can’t imagine getting caught up into this type of tension. But it’s actually not unusual at all.

Pastoral counselor, Bret Legg points to this parental and in law tug this way:

There “is a tug-of-war between ‘leave and cleave’ and ‘honor your parents.’ This tug-of-war is experienced by every married person. We’re all raised to honor our parents. And that obligation doesn’t end just because you get married. Yet, because you’re married, you’re called to separate from your parents and put a greater priority on your relationship with your spouse.” (From the Normalmarriage.org article, “How to Better Live With Your In-Laws: Tug-of-War”)

The In Law Tug

But how do you do that when there are so many different “loyalties” to consider?

“Why it is so difficult to find a comfortable arrangement with parents, in-laws and other members of your extended family? The idea of leaving your childhood family to unite with your spouse sounds perfectly reasonable. And you’d think making a fresh start free from outside interference would be a joyful adventure.

“In practice, though, this process often seems more like you’re forming a new mega-family. It’s one that includes parents, in-laws and, come to think of it, your spouse, too.” (Ingrid Lawrenz, from article, “In Law Tug of War”)

And really, when you think about it, you really are! You and your spouse were both members of two independent family units. Now that you are married, you need to form a new family unit where you are partners with each other. All other family units are to take a back-seat. It’s the “leave and cleave” principle that the Bible talks about.

The Leave and Cleave Tug

“But, before spouses can form their own independent family, they have to renegotiate relationships with parents and extended family. And since those bonds took years to form, the process of breaking away to create a new family isn’t complete after the first year, or the fifth. It’s an ongoing task.” (Ingrid Lawrenz, from article, “In Law Tug of War”)

That’s so true! Each holiday, special event, and each year escort in new challenges. And this is especially true once you have children who enter into your family unit. As Brett Legg further points out:

“The second tension is a tug-of-war between loyalties and boundaries. Before getting married, your loyalties were to your parents, your siblings, and your friends. But after you say, ‘I do,’ your number of loyalties increases. Now you have a loyalty to your spouse, and your spouse’s parents.

These boundaries should first be established before children come onto the scene. (And if you have stepchildren, it needs to be done right away, as well.)

“Many couples find themselves caught in a Family Tug of War, with opposing in-laws jockeying for prime position and grandparents who want to run the show. Even the best of us can end up with a tit-for-tat mindset. ‘The kids see more of your family than mine.’ This is either because we want to keep the peace with our own parents, or we feel genuinely hard done by because our spouse has joined his or her family in pulling on the other end of that rope.” (Laura Leavitt, from the Just Mommies article, “In-laws and Outlaws: The Good, the Bad and the Ugly”)

So, you need to find a way to be loyal to each other. That, above all human loyalties needs to be established first and foremost. It’s biblical, and it’s the right thing to do. But you also want to be loyal to your parents and in-laws. (That is, to the degree that you can.) But in order to do this you may need to establish some boundaries with them.

To help you in this mission, below are a few insights. The first is from the Focus on the Family article, “How to Better Live with Your In-Laws”:

“The first principle that applies here is that, if you’re a Christian, you owe your in-laws behavior that’s consistently Christian in character—as you do anyone else. This doesn’t ignore the reality that if your in-laws are ‘difficult’ people, are controlling and manipulative, are emotionally or mentally dysfunctional, or don’t share your faith, this may be a particularly hard challenge. The problem is that they’re not just anyone. They’re connected to your spouse through genetics, history, and complex psychological dynamics.”

Additionally, Concerning Boundaries Dealing with the In Law Tug

I gleaned a few suggestions that Ingrid Lawrenz had to say on this subject (from a past Marriage Partnership Magazine article titled, “In Law Tug of War”). I found them to be insightful. And I hope you do too:

•  “To limit confusion and minimize conflicts, it works best if each of you is the primary spokesperson to your own parents when it comes to working out differences. Also remember to keep your relationship with each set of parents separate and positive. Avoid making comparisons. One set of parents does not need to know everything the other is doing. They don’t need to know how much time you spend with them or what they buy for you.

•  “Try to be your spouse’s biggest fan. It’s not uncommon for parents to view an in-law as someone who has taken their ‘baby’ away from them. If they hear about your mate’s every little failure, it’s only natural for them to want to take your side. However, don’t hesitate to turn to parents for help if serious problems arise such as drug, alcohol or physical abuse.

•  “It is your responsibility to accept your in-laws for who they are. They may be very different from your parents. But different isn’t the same as wrong. And each time you and your mate work together to resolve a family conflict, you establish yourself as a respected adult in the eyes of your parents and in-laws.

•  “It helps to remember that before God you are responsible for how you talk to and behave toward your in-laws. You are not responsible for how they talk to or treat you. God simply asks this: ‘If it is possible, as far as it depends on you, live at peace with everyone.‘ (Romans 12:18)

•  “Your mate is the only family member you can actually choose. But your mate’s family comes as part of the deal. Living in peace with your in-laws is no joke. But it can be one of the most rewarding relationships you’ll ever invest in.”

Additionally, Concerning the In Law Tug:

Below is another suggestion given by Brittney Davis, in the Marriageroots.com article, “Establishing Healthy Boundaries with Your In Laws.” It is founded on the principle, “If you can’t say anything nice…” It’s one that my husband Steve and I have lived by in our in-law relationships. And it has worked well for us. Here’s what Brittney wrote concerning their experience:

“Early in our marriage, my husband and I decided that we would never speak ill about one another to our families. We promised that we would keep our secrets our own. Our parents don’t need to know everything. Some things really are better left unshared.

“Instead, we do our best to build each other up to our parents. It’s important that they hear and witness the good things happening in our relationship. We want our parents to be for us—both of us. We want them to support and encourage us together as a couple. And we want them to see the best in both of us.”

This is great advice, from Ingrid and Brittney!

To gain added insights, I encourage you to read the Crosswalk.com web site article dealing with conflict with in laws:

• SHOULD IN-LAWS BE OUTLAWED?

In closing, here is an additional article that I believe you will find it helpful as well to read:

• BOUNDARIES FOR IN LAWS

Tagged: boundaries in marriage, dealing with in laws

5 responses to “The In Law Tug Of War”