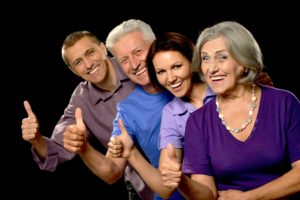 Jesus repeated what was said at the beginning of our existence. He said, “For this reason a man shall leave his father and mother and be joined to his wife, and the two shall become one flesh“ (Matthew 19:5). This passage is used very often and because of that, it’s crucial we don’t become numb to its basic points. It shows us what priority we should give with our parents and In-Laws.

First, marrying our spouse means we turn our loyalties to him or her. That doesn’t mean we are not loyal to our parents. But it does mean that we are to place priority on our husband or wife.

One obvious step to leaving our parents that shows we place priority on our husband or wife is changing homes. Our attention and effort turn toward our family’s well being and happiness and a central home together.

Second, becoming one flesh, in addition to referring to a husband and wife joining sexually, suggests we should stand united with our spouse regardless of outside opinions. We are so united with our spouse it’s as if the two of us are one person. Even if other people, such as in-laws, disapprove or offer their opinions, we make our own decisions and stand by them, together.

Janet and Tim had been married for a year when her mother complained about her daughter’s situation. “You’re just wasting your money living in that apartment,” she began, “and besides, that’s no place to have children. When are you going to have children, anyway?”

Janet didn’t want to be disrespectful to her mother, but she and Tim had already discussed their wants and needs concerning their home and having children. They were happy in their apartment and wanted to wait a few more years before having children.

When Tim walked through the door, Janet told him about the discussion with her mother. “Maybe mom’s right,” she said.

Tim became extremely angry. “It’s none of her business! It’s not her life. This is about our life!”

The two argued for several hours. Janet felt she needed to defend her mother, and Tim felt disrespected by being told what he and his family should do.

It’s important to mention that Janet’s mother said those things because she loved her. She wasn’t trying to meddle or intrude —but she did. Janet would have best served her marriage by politely telling her mother that she and Tim made decisions together and, though she appreciated her mother’s concern, in order to protect her marriage she had to insure their independence and freedom to choose for themselves.

One primary difficulty married couples face is in managing conflict with the parents of their spouse. It’s a very good idea to make your spouse the “middle man” for conflicts you have with his or her parents. Relationships are stronger when they have time behind them and, as they say, blood is thicker than water. Therefore, in-laws will probably react better to a request from their son or daughter. If her parents need to back off, it’s better that it comes from her.

Jay and Melanie lived about 20 miles from his parents. Many times, on Friday nights, Jay’s parents would drive to their house and the four would play board games until everyone became sleepy. After several months of this, both Jay and Melanie wanted to spend a Friday night alone. “Why can’t we go to a movie or something by ourselves?” Melanie asked.

If Melanie had gone to Jay’s parents with this request, they might have been offended when she said she and Jay wanted time alone. They may have felt she forced Jay into siding with her. It could even be that because of this, they resented Melanie for the rest of their lives. If, on the other hand, Jay went to his parents and told them he and Melanie loved them very much but needed some time to do things by themselves, they’d probably react with much more understanding and patience.

It’s important to be sensitive to your spouse’s feelings concerning your parents. If he or she feels crowded or disrespected, it’s important you take these feelings seriously and act to improve the situation. These principles should also be taken into consideration by parents and should influence the way they treat their child’s spouse.

You’ll know you’re in a situation where change should occur when you and your spouse don’t feel you have your own identity. One of the purposes of marriage is for a couple to establish an identity that is independent of their parents. If this doesn’t happen, a healthy marriage becomes much more of a challenge.

Some marriage experts say couples should not live in the same town as either of their parents. The reasoning is that with constant availability of their parents, the couple doesn’t learn to rely on each other. It’s difficult to form an identity together unless you learn to rely on the other instead of parents. It is not my opinion that every couple should live in a separate town from their in-laws. But for some, that situation might be best. It might be best for you if your in-laws are too involved in certain aspects of your relationship. This is especially true if they are too involved in conflicts between you and your spouse.

Part of what it means to have your own identity as a couple is that conflicts are resolved without the involvement of in-laws. The scenario below shows ways a couple could fall into the trap of “in-law dependence.” It also shows the consequences they might face if independence is not a priority.

After six months of marriage, Tonya and Matt had their first big fight. What was the subject? It doesn’t matter.

While in tears, Tonya called her mother and told her about the entire ordeal. Her mother listened and became angrier by the minute.

“I’m coming over there,” her mother said.

When she arrived at the couple’s home, she immediately began telling Matt why Tonya was correct and scolded him for disagreeing. According to her, Matt owed Tonya an apology.

From that point on, Matt had difficulty trusting his mother-in-law. He felt she plotted against him and wanted to control him. Matt also felt betrayed by his wife. He felt that she, rather than being on a team with him, called for backup to defeat him.

If you and your spouse are arguing about any subject, neither has the right to involve a parent in the disagreement. If your spouse brings a parent in on an argument, you’re probably going to feel just as Matt did. You’d feel it’s “them against you.” This violates the oneness attitude that should exist in your marriage relationship.

In all things, respect your mother and father-in-law. Remember, they are the parents of someone very special — your spouse. If you are a parent of a married child, your son-in-law or daughter-in-law is very special. That is because he or she is your child’s life partner.

It is best for each family to realize the independence of the other. Your spouse must know your parents will not interfere with the family you are building. Your parents must realize you and your spouse need to build a life and relationship separate from them. This requires patience and, at times, may be painful.

It’s important to honor and respect your in-laws, but above that, protect your marriage. This principle will pay great dividends in the future.

This article is written by Lee Wilson who is with Marriagehelper.com —a Love Path web site, which was born from a prayer and a dream to help people truly experience what married love should be.