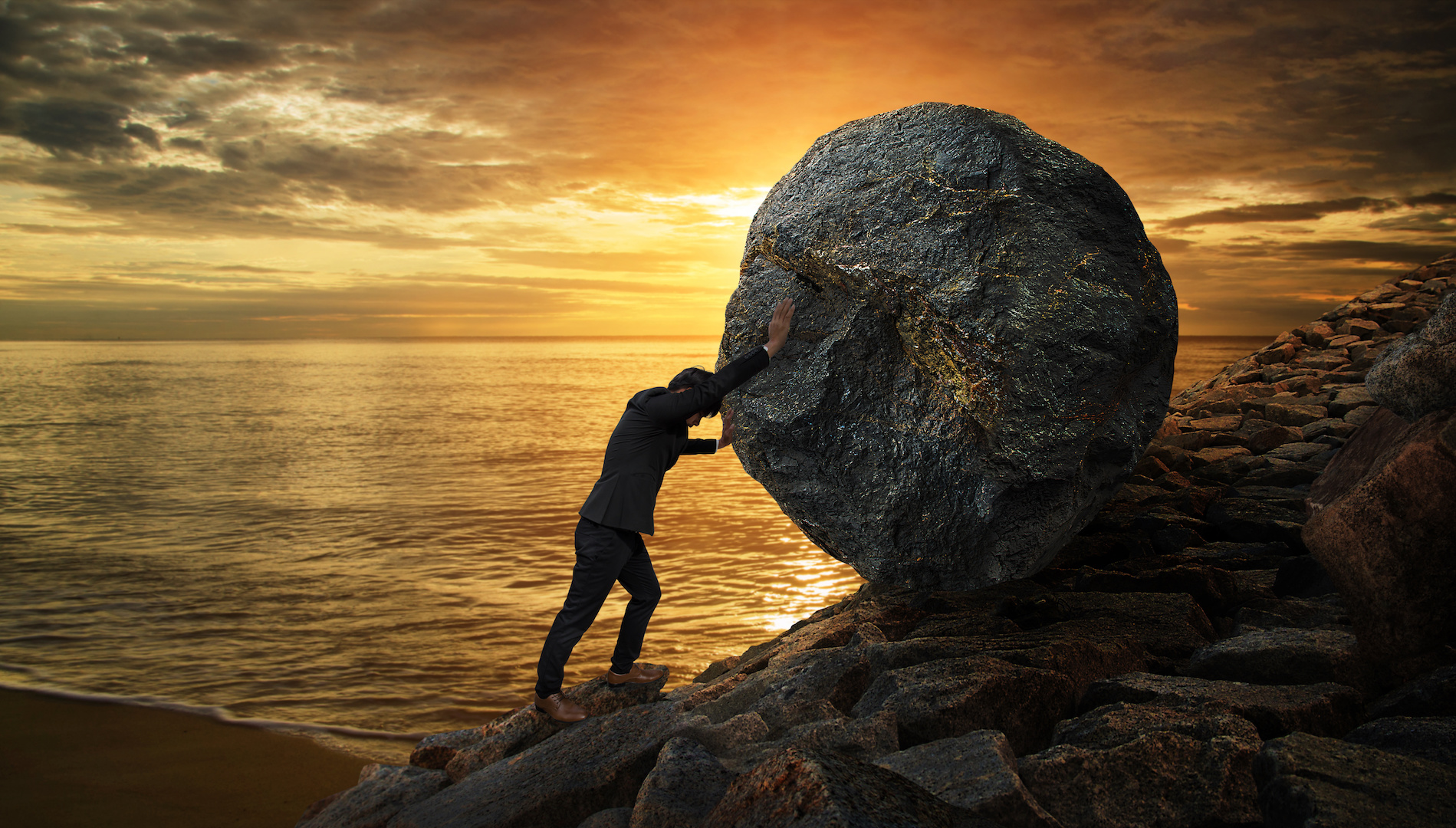 How do you get through the tough times in your marriage —times when you feel helpless and the situation looks hopeless? You can P.U.S.H. with pressing, pushing prayer. Every believer can P.U.S.H. —knowing that God isn’t surprised by the trial you’re facing. He’ll provide the stamina and the wisdom we need to get through the dilemmas we face.

We want to share a story that was sent to us a long time ago by a friend. We don’t know the original author but what that person wrote is powerful. If it’s possible, read this together as a married couple and then discuss the insights that come to mind. It reads:

A man was sleeping at night in his cabin when suddenly his room filled with bright light and the Savior appeared. The Lord told the man He had work for him to do, and showed him a large rock in front of his cabin. The Lord explained that the man was to push against the rock with all his might. This, the man did, day after day.

For many years he toiled from sun up to sun down with his shoulders set squarely against the cold, massive surface of the unmoving rock, pushing with all his might. Each night the man returned to his cabin sore, and worn out, feeling that his whole day had been spent in vain.

Seeing that the man was showing signs of discouragement, the adversary decided to enter the picture by placing thoughts into the man’s weary mind: “You’ve been pushing against that rock for a long time, and it hasn’t budged. Why kill yourself over this? You’re never going to move it” —thus giving the man the impression that the task was impossible and that he was a failure. These thoughts discouraged and disheartened the man.

“Why kill myself over this?” I’ll just put in my time, giving minimum effort and that’ll be good enough.” And that’s just what he planned to do —until one day he decided to make it a matter of prayer and take his troubled thoughts to the Lord. “Lord” he said, “I’ve labored long and hard in Your service, putting all my strength to do that which You’ve asked. Yet, after all this time, I haven’t even budged that rock by half a millimeter. What’s wrong? Why am I failing?”

The Lord responded compassionately, “My friend, when I asked you to serve Me and you accepted, I told you that your task was to push against the rock with all your strength—which you’ve done. Never once did I mention to you that I expected you to move it. Your task was to push. And now you come to Me, with all your strength, thinking that you’ve failed. But is that really so?”

“Look at yourself. Your arms are strong and muscled. Your back sinew is mighty. And your hands are callused from the constant pressure. Plus, your legs have become massive and hard. Through opposition you’ve grown much and your abilities now surpass that which you used to have. Yet you haven’t moved the rock. But your calling was to be obedient and to push and to exercise your faith and trust in My wisdom. This you’ve done. I, my friend, will now move the rock.”

The Moral of the Lesson:

At times when we hear from God, we tend to use our own intellect to decipher what He wants. What God actually wants is just simple OBEDIENCE AND FAITH IN HIM. By all means, exercise the faith that moves mountains, but know that it’s still God who moves the mountains.

We hope what you’ve read will influence what you do next in your married life. As Henry Blackaby said, “When God speaks, what you do next reveals what you believe about God.” The question is: Despite outward appearances in the trouble you’re facing, what do you believe God would have you do about it?

In addition, we’ve found additional articles on the Internet that might minister to your situation as well. Please click onto the links below to read:

• DOES GOD KNOW WHEN YOU’RE HANGING ON BY A THREAD?

• DOES A GOOD GOD WANT ME IN A BAD MARRIAGE?

• PRAY BIG PRAYERS FOR YOUR MARRIAGE

• PRAYER FOR YOUR WIFE HAS GREAT POWER

• BECOMING A GODLY WIFE: Cultivate a Life of Prayer

• HOW TO PRAY FOR YOURSELF WITH RECKLESS ABANDON

• HOW TO WRESTLE IN PRAYER