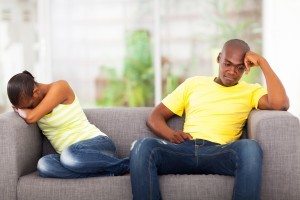 It’s something we learned a long time ago —don’t pile up grievances against each other. Make sure your grievance “accounts” are short lived so you don’t get buried under the weight of it all. We’ve seen spouses who keep piling one gripe on top of another until it eventually gets to the point that it all starts caving in on them. And WOW…the fights that ensue are something else! Keep short accounts.

The other night was one of those “short account” times for us. Steve had said something to me that set me off emotionally. I was on my last nerve and he definitely stepped on it. I went huffing off and put some space between us (physically and emotionally). When he came into the room I was in, he knew I was anything but happy with him. As a result, he grabbed onto a negative attitude too. We didn’t settle it that night (it was late) so we just kept our distance from each other within our bed.

The funny thing was, I wasn’t mad at him and he wasn’t mad at me (although he had cause to be); we were just disconnected and weren’t acting, as we should with each other. An apology was hanging in the air (mine to give to him more than the other way around), and nothing good was happening between us.

Thankfully, the Lord spoke to my heart, I listened, and apologized. Steve graciously accepted my apology and said he was sorry too. We hugged and all is well with us again.

We totally agree with something that Dr Sharon Hart Morris said:

That’s what we’ve learned. Grievances against each other pile up, roll around in our brains, and often become tainted by our own perspectives. And the longer they’re there, the more damage they can do to our marital relationship. We need to get them out in the open, and dealt with in as short of a time as it is reasonable.

“If we have not resolved our differences, we can feel somewhat estranged from each other and are therefore more vulnerable to being defensive. Some couples who fail to resolve conflicts over a period of years draw the conclusion that they are not compatible and, in fact, are enemies. Their rationale becomes ‘an enemy is out to get me; therefore, I must always be on my guard.’ They basically begin looking for something to which they can respond defensively. Subconsciously, they are expecting attacks from time to time, and they live in a state of readiness to defend themselves.” (Gary Chapman, from the book, “Covenant Marriage”)

Needless to say, this is not the way to build a healthy marriage relationship.

Learning Through the Lives of Others

I’ve been thinking of the short account concept this week while grieving over the death of 3 people I know. I attended the funeral on Saturday of a wonderful, godly friend. She fell asleep in her easy chair, passing away there from this world to her heavenly home. No one expected it —not even my friend Joyce. It illustrates all the more the importance of keeping short accounts. You never know what will happen one day to the next. Thankfully everything was good between Joyce and the many loved ones she left behind.

And then I learned of another friend, who was newly married, who lost her husband after he was diagnosed with cancer. They thought they would have longer to be together, but his cancer took an ugly turn. He died two weeks later. Thank God they kept short accounts. My friend is grieving because she misses him, but at least she knows all was well between both of them when he died.

Then another friend (we both attend a worship group together) also lost her husband last week. They went separate directions in the morning —she was doing volunteer work for a ministry; he was bicycling with friends when he and a friend were struck by a car and killed right there. It was of course sudden and unexpected. I hope with all my heart that she and her husband were doing well in their relationship before he died so she doesn’t have to live with the added sting of regrets.

I write all this to say, who knows what each day will bring, except God Himself? Tomorrow is never promised to us. PLEASE keep short accounts with each other (to the best of YOUR ability) –even if you live another hundred years. It works to your advantage on so many levels. Whatever you do, please follow God’s word where it says:

“If it is possible, as far as it depends on you, live at peace with everyone.” (Romans 12:18) “Get rid of all bitterness, rage and anger, brawling and slander, along with every form of malice. Be kind and compassionate to one another, forgiving each other, just as in Christ God forgave you.” (Ephesians 4:31-32)

Work on your differences. Settle whatever angst you have against your spouse sooner, rather than later. Work to get past those “bumps” before they turn into mountains. And even if they’re mountains, then get the help you need to take them down one shovel (grievance) at a time. Do it NOW!

We hope you will and pray for you as you look for God to guide you,

Leave a Reply to Lonely from South Africa Cancel reply

One response to “Keep Short Accounts on Grievances”