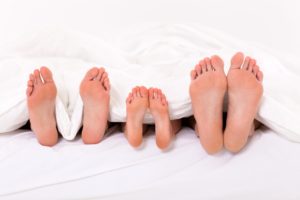 1 Corinthians 7:3-5 is an often misunderstood Scripture. People have tried to use it to prove they have a “right” to their mate’s body. But that’s not what it’s saying at all. Let’s take a closer look at it:

The only exception to this rule would be the agreement of both husband and wife to refrain from sexual intimacy for a limited time, so they can give themselves more completely to prayer. Afterward they should come together again so that Satan won’t be able to tempt them because of their lack of self-control.

This is talking about mutual giving and mutual willingness to not deprive. It is not talking about taking or demanding. It’s not that we own our mate’s body and can demand, “Give, because I own you!” We’re not in that position. This Scripture commands us to give. As a married couple, we’re both in a giving relationship, not in a position of ownership where we have the right to take or demand.

Taking Responsibility in Your Bedroom

Clifford and Joyce Penner describe what we’re talking about in their book The Gift of Sex (page 108):

“We advocate the idea of taking the responsibility for your own sexual needs. The sexual response is something that happens in your body. It is personal and loaded with emotions. Each individual differs from every other individual and each individual differs from one experience to another. You can’t count on all women wanting it “this way’ or men ‘always wanting’ …or even this particular woman or man responding to the same thing every time. Because of the beautiful and complicated creation you are, there is no way your partner can consistently guess what would please you. [That’s what we would be demanding they do—‘consistently guess.’] However you usually know what you like, so you should take the responsibility to go after that desire.”

We believe this. We promote it. But… with these three cautions:

Don’t proceed in pursuing your own needs at the expense of your partner. Otherwise it becomes a self-centered, selfish pursuit. No pushing, badgering, nagging or manipulating your spouse to do what you want. Simply ask. If your spouse doesn’t feel comfortable with what you are asking, back off without coldness or theatrics. Such antics are seen as punishment to your mate for not doing what you want and will actually lower your mate’s sex drive. Now that would be pretty dumb, wouldn’t it?

2. Ask to be scratched where you itch.

Simply tell your spouse about your needs and desires without placing demands on them. Your spouse is not a mind reader. He or she can’t know where you itch or how you want scratched…unless you say it out loud.

We sometimes hear, “But if he loved me — if she loved me — they’d just know!” Now we ask you, does that make any sense?

3. Communicate to your mate when he or she is doing something that turns you off.

Here are the ground rules: Talk together outside of your bedroom, fully clothed. Otherwise, you are both too vulnerable. Talk kindly about what it is that’s turning you off. Put it in positive terms like, “If you would try ‘this’ instead of ‘that,’ it might work a lot better for me.” Or, “I think it would be sexier if you…” If you talk about the problem in a non-blaming way, giving a positive solution for it, your mate will feel like there’s something definite he/she can do about it. Then it doesn’t seem so hard.

A lot of couples fall into the habit of playing manipulative, selfish games with each other. Instead of mutually givingto one another and being willing to not depriveone another sexually, as 1 Corinthians 7 clearly states, they manipulate their mate to get what they want. And instead of being honest in their communication about sex with each other, they play games that hurt their relationship.

We play these games because we don’t understand our differences sexually. Women are wired: “No love, no sex.”

Men are wired: “No sex, no love.” This is hard wiring, so we need to give ourselves to truly understand the way God made our mate.

Female wiring declares: value me, love me, make your love obvious to me, then I’ll want to have sex with you.

This standoff usually manifests itself in a little game called The Approach/Avoidance Game. One of you has a greater sex drive than the other. Generally men have a higher sex drive than women, but that’s not always the case. The game starts when the spouse who has the higher sex drive starts believing he or she has to ask or hint for sex 6 or 7 times in order to get it once. You feel like you have to go through this pattern, this game, in order to get sex one time.

If I were to run as fast as I can at you, would you want to lean forward to catch me? Or would you step back out of the way so you wouldn’t get run over? You’d step back out of the way, right? That’s called self-protection. That’s what happens with the mate who has the lower sex drive. She or he will back off from you out of self-protection and start avoiding sex altogether. If you are the “Approach-er” in the Approach/Avoidance game, you are actually lowering your mate’s sex drive.

That’s not what you want. You both have to talk about this. Together you have to confess you are playing this game.

Game Playing in the Bedroom

If you are playing the game, you must decide together what you are going to do about it. It takes both of you to stop it. If you’re the “Approacher,” you’ve got to back off lovingly without even subtly trying to lay guilt on your mate. If you lay guilt, you’ll lower your mate’s sex drive. You’ll shoot yourself in the foot. Back off lovingly.

If you are the “Avoidee,” then you have a responsibility here too. Talk about how you have been playing this game and together decide that it’s going to stop. As the “Avoidee,” you must be honest with your mate and with yourself. You can now stop avoiding sex with your mate, because he (or she) is going to stop approaching you so much. Start learning to talk together about your sexual desires. Learn how to mutually give to one another. Think about loving and giving to your mate, not about taking.

We’ve had “Approach-ers” complain to us, “I quit approaching last week and it’s not fixed yet!” We have to ask, “How long have you played the game?” You see, if you’ve played this game for years and years, don’t expect that in a week or two you’re going to turn things around and everything’s going to be hunky-dory again. It’s going to take time and effort. But if you work on this together, you can stop playing this game in your bedroom and beyond.

Make Your Bedroom a Place of Mutuality

If you kick these two habits out of your bedroom, it’s going to be a lot happier place. Not only that, but Satan won’t be able to use these habits against you. 1 Corinthians 7 makes it clear that the devil wants to get a foothold in your love life. And it also makes it clear that one way to kick him out of your bedroom is to be sure you are mutually giving to and willingly not depriving your spouse.

This article comes from GTO Family Ministries founded by Harold and Bette Gillogly. This great ministry has a number of other articles related to marriage that you can read on their web site at Marriages.net as well as resources and other information you may be interested in obtaining. It’s sure worth the visit to their web site. We hope you’ll do so!

One response to “Kick ’em Out Of Your Bedroom”