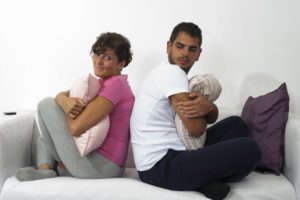 “You may believe that living together is a good way to find out if you are compatible. You may look at it as a sort of ‘test drive’ that will improve your chances for marital success. While this seems to make sense intuitively, actually the opposite is true. Research indicates that couples who cohabit before marriage have a 50% higher divorce rate than those who don’t. These couples also have higher rates of domestic violence. They are also more likely to be involved in sexual affairs. If a cohabiting couple gets pregnant, there is a high probability that the man will leave the relationship within two years. This often results in a single mom raising a fatherless child.

“Would a father-in-law be as likely to get his daughter’s live-in boyfriend a job down at the factory. Or would he provide the money for their first home as he would his daughter’s husband, his son-in-law? Of course not. This demonstrates one way in which cohabiting relationships are practically very different.” (Erin Roach, from Crosswalk.com article, “Cohabiting Normative but Harmful”)

There is often an awkwardness experienced in the minds of extended family members. But even more importantly, there are spiritual reasons for not living together. As followers of Christ we are to do things God’s way.

“God ordained certain rules regarding living together in order to protect people. His law was born of love, concern, and compassion for His fallen creatures. The sanctions God imposed on sexual activity outside marriage do not mean that God is a spoilsport or a prude. Sex is an enjoyment He Himself created and gave to the human race. God, in His infinite wisdom, understands that there is no time that human beings are more vulnerable than when they are engaged in this most intimate activity.

“Thus, He cloaks this special act of intimacy with certain safeguards. He is saying to both the man and the woman that it is safe to give oneself to the other only when there is a certain knowledge of a lifelong commitment behind it. There is a vast difference between a commitment sealed with a formal document and declared in the presence of witnesses, including family, friends, and authorities of church and state, and a whispered, hollow promise breathed in the back seat of a car.” (R.C. Sproul)

On this Issue, Additionally Consider:

“We’re told to give our body to our spouse only within the context of a permanent marriage commitment. (See Genesis 2:24.) Anything less than this dishonors the high purpose that God intends for our sexuality. Premarital sex is, therefore, self-centered. It seeks immediate physical pleasure at the expense of God’s design for us and for our partner. It should be fairly obvious as well that those who practice premarital sex on an ongoing basis are also deliberately reserving the right to exit the relationship easily, should they decide to.

“In God’s plan, sexual union was never meant to be separated from this total union. C. S. Lewis compares having sex outside of marriage to a person who enjoys the sensation of chewing and tasting food. He doesn’t want to swallow the food and digest it. This is a perversion of God’s intent. Food was meant to be chewed and swallowed. In a similar way, the sex act was meant to be part of the whole-life union of marriage. When we attempt to experience sex apart from this union, we’re disrespecting and dishonoring marriage.”  (From the book, “Sex is Not the Problem —Lust is”)

“Regardless of whether you live under the same roof, sex outside of the covenant of marriage is not God’s plan for sexuality. It’s no wonder couples who have cohabited report less satisfaction in marriage. They also have a higher rate of infidelity and divorce. Straying from God’s plan always has consequences. If someone tries to tell you otherwise, they are promoting a lie.” (Suzanne Hadley Gosselin, from the Boundless.org article, “The Living-Together Lie”)

Those are just a few of the reasons why it isn’t good to live together before marrying. There are even more reasons. So, below, we provide links to other web sites to help you to further.

Dr Willard Harley has a Question and Answer article where he makes some EXCELLENT points. We encourage you to read them (plus other information you can find on his web site).