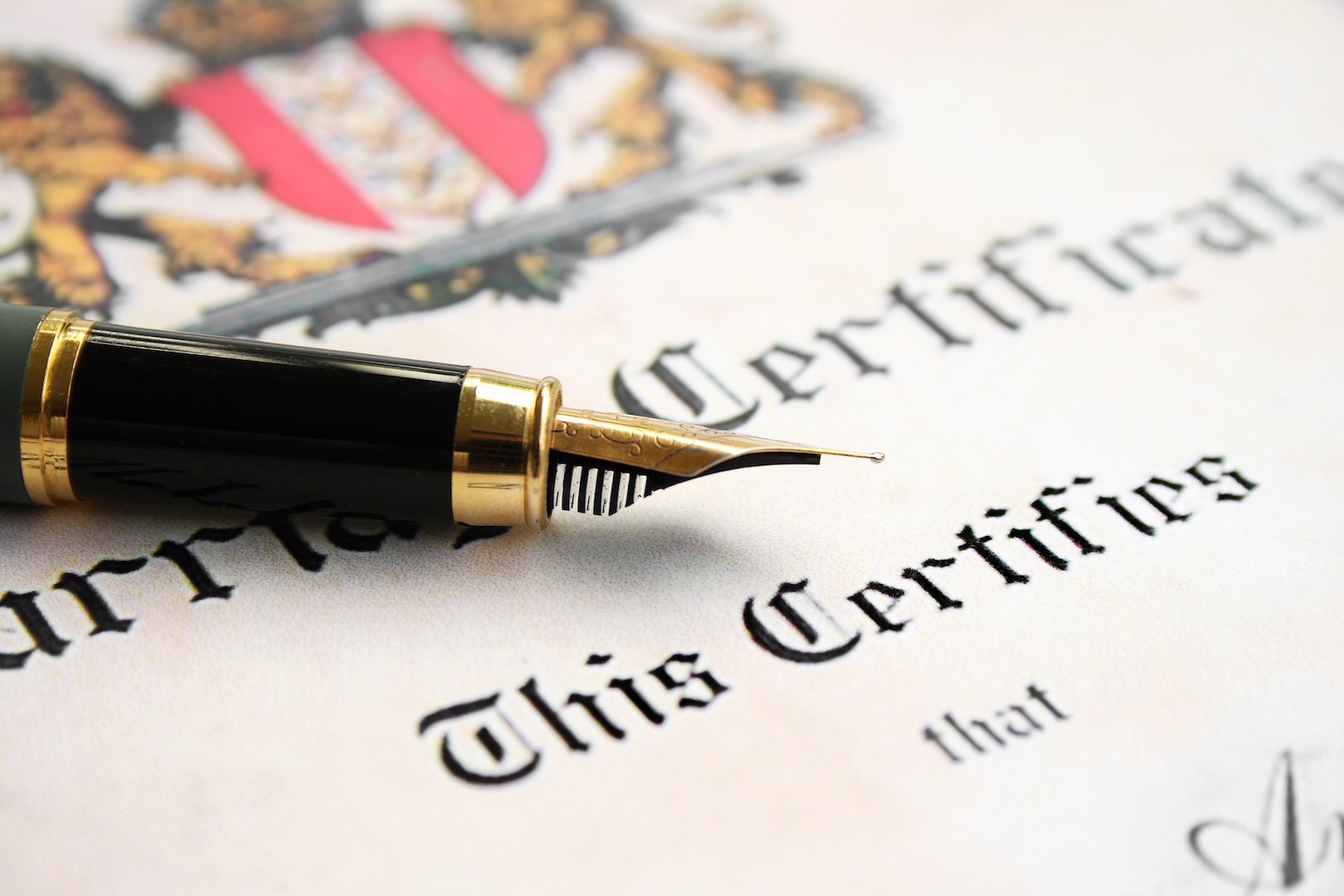 “We don’t need a marriage license to show our love. It’s just a piece of paper!”

I have lost count of how many times I have heard this over the years. ‘It’s just a piece of paper.’ Those who make that statement often declare that they are doing “what is right for them” and that make sense to them. But in the fuller picture, especially when it comes to those who profess faith in Jesus Christ, is that really true?

We’d like you to consider a few points, hoping you will see that this “piece of paper” and your hesitation to sign it, really isn’t as “right” as you might have thought previously.

The Value of a Marriage License

One point to consider is its value:

“‘It’s just a piece of paper’ they say. The deed to your house is ‘just a piece of paper.’ Your apartment lease agreement, your car registration, your check on payday, your driver’s license and so many more things qualify under the title of ‘just a piece of paper.’ But you make sure that you have these in place, and you are very protective of them. High school diplomas, certificates of completion, college degrees are all ‘pieces of paper.’ But, they are highly valued. Shouldn’t you value the most important relationship in your life at least as much as you do your house, car, or level of education?” (Charles Perkins, from article It’s Just a Piece of Paper)

There are a lot of misconceptions when it comes to the marriage license and its importance. Michael A Covington made the following points concerning this, in his article, Explaining Christian Sexual Morality to a Non-Believing World:

Misconception: ‘A marriage certificate is just a piece of paper.’

Then why are you afraid of it? Every time I’ve seen a couple living together out of wedlock, it has been one of two things:

(a) It is a one-night stand that persisted. That is, they really have made no commitment at all.

(b) It’s a situation where one of the pair thinks they are practically married. And the other thinks they have not actually made any commitment to marry. (I.e., it’s a trick!)

Let’s distinguish marriage from wedding. If you’re ready to marry, but you’re putting it off because of some difficulty arranging a big fancy ceremony — please re-think where you stand. Either make the commitment, and get it publicly registered, or admit that you are not yet married.'”

Hannah, in another article brought up a few additional points that it might be good for you to consider.

I must have heard that old saying about marriage just being a piece of paper a million times from people who were saying, why bother getting married? However, there really is more to marriage than a piece of paper. That is because if a couple is married it gives couples many more options legally in a number of various areas.

Couples that believe marriage is just a piece of paper are not only short changing themselves, but their partner as well.

Couples who think it’s just a piece of paper have a lot to learn, including trust.

Just a Piece of Paper?

In that respect, what they’re saying does not make any sense. Those who have been married and had enough courage to put their love on the line for the one they love, and to commit for a lifetime to love, honor, and cherish are way ahead of those whose say, no promises here, let’s just see how it all goes!” (From an article titled, “Marriage vs. the Piece of Paper Syndrome,” which was formerly posted on the Internet)

We understand that many who live together are either not ready to make the type of commitment it would take to sign this “piece of paper.” It’s either that, or they don’t see this step of commitment as one that is necessary. But for those who claim to be Christians, we hope you will consider the following:

Commitment is just the beginning. It is the foundation on which everything else is built. A wedding makes the statement to God that I want to have His very best for my family. The Bible tells us that God’s best for couples is one man and one woman together for life within the covenant of marriage. (See Genesis 2:22-25; Matthew 19:4-6.)

Sexual love and the new life that can issue from it, are precious gifts from our Creator. It’s so precious in fact that they need to be reserved for one person with whom a binding life-covenant has been made. (See 1 Corinthians 7:2-9; 1 Thessalonians 4:1-7.) Sharing these God-given gifts with that special person is one of the things that makes marriage sacred.” (See Proverbs 5:15-20.) (Earl Creps Phd. from the article, It’s Just a Piece of Paper)

As its been said, “It’s not just a piece of paper unless you treat it as such.” But for those of us who are “Christ followers.” we need to consider it to be more. It’s especially important what the Lord thinks about the “piece of paper” called a Marriage License.

To learn more by reading what author Lakita Garth writes concerning this issue, in a series of Crosswalk.com, please click onto the following links to read:

• MARRIAGE IS JUST A PIECE OF PAPER (Part 1)

• MARRIAGE IS JUST A PIECE OF PAPER (Part 2)

• MARRIAGE IS JUST A PIECE OF PAPER (Part 3)

Below are a couple of myths concerning living together and marrying with the “piece of paper”:

The Bible Doesn’t Teach That a Civil or Religious Ceremony Must Be Performed For Marriage to Be Valid In God’s Eye, So Why Have One?

The institution of marriage was first created and ordained of God (Genesis 2). All marriages are still blessings ordained by Him in order that two may become one. It is evident that in biblical times there was a contractual agreement, perhaps verbal, signifying marriage. The parables of “The Wedding Garment” (Matthew 22:11-14) and The Ten Virgins” (Matthew 25:1-13) indicate that marriage took place at a given time and place.

“The scripture says ‘Give to Caesar what is Caesar’s, and to God what is God’s‘ (Matthew 22:21; Mark 12:17 and Luke 20:25). The government (the ‘Caesar’ of our day) requires that we must have a marriage license to be legally recognized. Since a marriage ceremony is a civil requirement, we are obligated as law abiding citizens and Christians to observe it.

‘The Marriage License Is Only a Piece of Paper, and it Doesn’t Automatically Make Two People Committed to Each Other.’ ‘It won’t make me love you more.’ ‘We are already committed to each other, we don’t need a piece of paper to prove it.’

Dunagan (1993) presents the other side of the argument: ‘If there’s no difference in your relationship, what’s wrong with adding one more symbol to your total commitment?’ Evidently, marriage consists of more than just a piece of paper.

“After all, Dunagan says, who raises strong objections over ‘just a piece of paper’? Who has ever objected to buying a ring (or anything nice) just to prove their love?

What Getting Married Means

Here’s another quote on this issue that we’d like you to consider:

Getting married means for a woman that I am now your wife, not your live-in play thing and housekeeper. For a man, I am now your husband, not your handyman. I’m not a guy who completes your honey-do-lists. It means that we get to have a wedding where, before virtually every person alive who means anything to us, we commit ourselves to each other. It means that we have determined to bring all those people we love into our lives. Furthermore, it means the families of our spouse are now our family too. It means we have legal obligations to one another.

When we realize all that is achievable by marrying and unachievable by living together without marrying, one must wonder why anyone would voluntarily choose not to marry the person he or she wants to live with forever. Unless, of course, one of them really isn’t planning on forever.” (Doug Billings, from article “Marriage vs Living Together” posted on Examiner.com)

We thought we loved each other and we did. But, once we took the marriage vows and got the ‘piece of paper,’ we found that the old love was but a mere shadow of the love that developed once we were married. There is no comparison.

But the best reason to consider the marriage license more than just a “piece of paper” and to get married, is because of what God tells us in the Bible. It’s important to follow HIS ways of doing things, not ours. As one (unknown) author stated:

The Bible gives the best reason for couples not to live together without marriage. ‘Let marriage be honorable among all, and the marriage bed be without defilement, for God will judge fornicators and adulterers,’ states Hebrews 13:4. The Bible plainly and simply says that living together outside of marriage is fornication. Just what is meant by ‘fornication’? One dictionary describes it as ‘human sexual intercourse other than between a man and his wife.’ For us to have a good conscience, this Bible counsel must be followed: ‘God wills that you abstain from fornication.‘ (1 Thessalonians 4:3)

With that said, just what IS marriage, as brought out in God’s Word? The web site GotQuestions.org has an article posted that addresses this very issue. But upon reading it, we also recommend that you read the articles linked below it as well. We believe as you read them, you will get a fuller picture of the difference between marriage and just living together as if you were husband and wife without getting that “piece of paper.”

• WHAT CONSTITUTES MARRIAGE ACCORDING TO THE BIBLE?

“You are the light of the world. A city on a hill cannot be hidden. Neither do people light a lamp and put it under a bowl. Instead they put it on its stand, and it gives light to everyone in the house. In the same way, let your light shine before men, that they may see your good deeds and praise your Father in heaven.“

Poking Holes in the Darkness

When you live together without being married, do you truly believe that living together without a marriage license will cause others to “see your good deeds and praise your Father in heaven“? Are you poking holes in the darkness so the light of Christ is seen through how you live? Or are you contributing to the darkness by going along with the standards that the world considers to be OK? Are you being a stumbling block to those who are weaker in faith? (See: Romans 14 and Romans 15.)

We’re told in the Bible:

“Be very careful, then, how you live —not as unwise but as wise, making the most of every opportunity, because the days are evil. Therefore do not be foolish, but understand what the Lord’s will is.“ (Ephesians 5:15-17)

“Therefore, I urge you, in view of God’s mercy, to offer your bodies as living sacrifices, holy and pleasing to God —this is your spiritual act of worship. Do not conform any longer to the pattern of this wold, but be transformed by the renewing of your mind. Then you will be able to test and approve what God’s will is —His good and pleasing and perfect will.” (Romans 12:1-2)

Filed under: Preparing for Marriage Sex Before Marriage Single Yet Preparing

42 responses to “Is the Marriage License Just a Piece of Paper?”