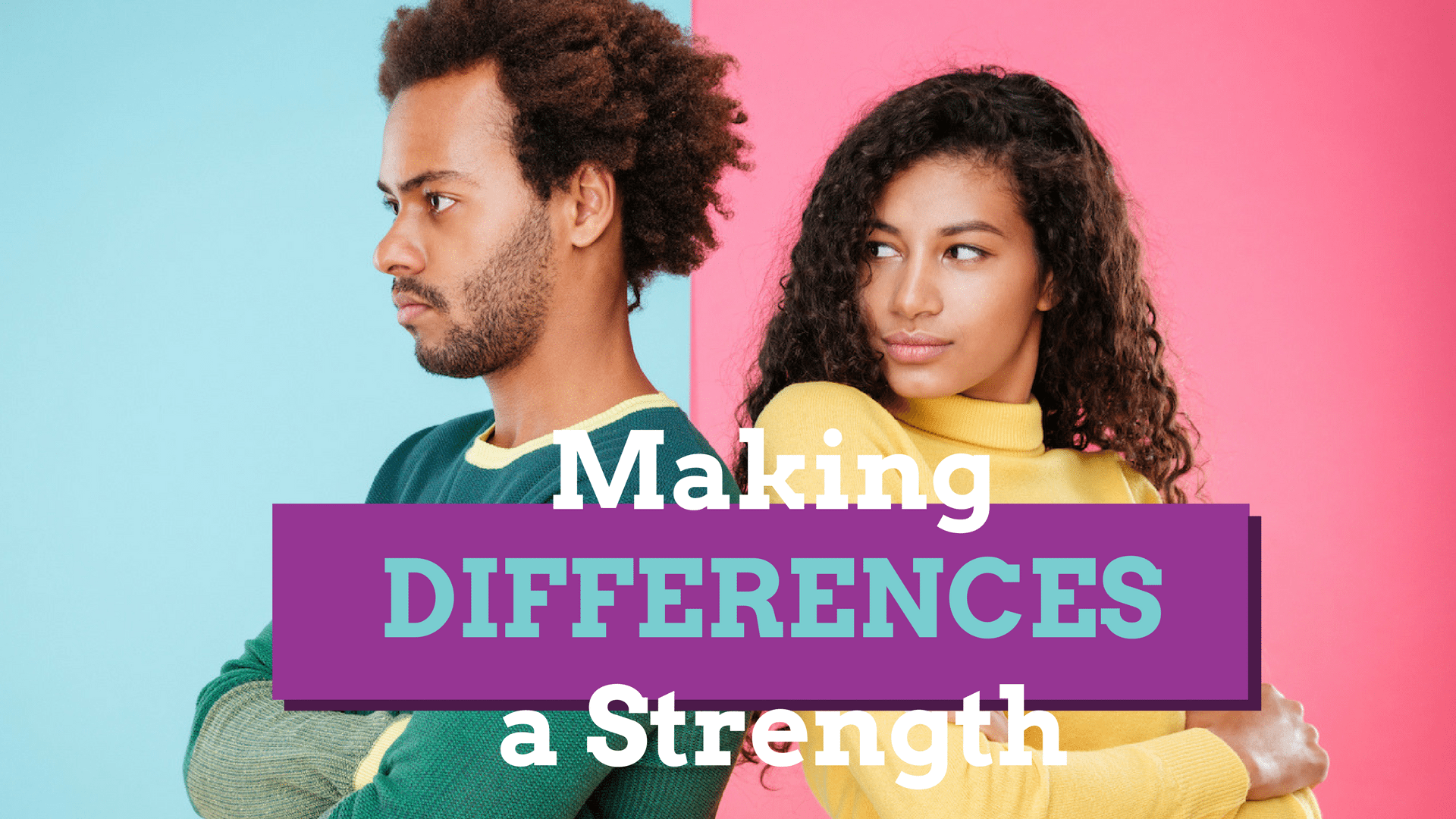 I’m constantly amazed by how easy it is to overlook one of the more obvious facts about men and women: They’re different! Feminists and others in the recent past have worked to blur the distinctions between the sexes. But this effort is ultimately doomed because God created us male and female —different. These individual differences can work for us or against us.

Barbara and I have worked through many of our differences. Some were funny, but others weren’t.

All of us know that men and women are separated by more than basic, biological nuances. But just how different are we? After considerable research, an author named Cris Evatt developed a general summary of male and female personality traits. Of course, these are generalizations that may only apply in degrees to any particular person, and some items on the list probably relate more to social conditioning than real personality differences. But you will enjoy reviewing and discussing the list with your spouse.

Some of Our Differences:

Whew! A list like that makes it clear why combining two people with different qualities and approaches to life into a marriage is a challenging task. And to complicate things more, sometimes a quality that attracted you to your mate—”He’s so funny!”—can frustrate you after marriage: “Why can’t he be serious once in a while?”

That’s why you should often remind each other, “You are God’s perfect gift for me.”

Do you find that difficult to do, when your differences are so glaring and irritating so much of the time? Do you think, “You are God’s perfect gift for me?” If so, below you will find a bit more on this subject. It is also written by Dennis and Barbara Rainey. It could help you in how you handle your differences. Keep in mind that the above differences can be turned around as far as which spouse has which trait. But the advice given below would apply, just the same:

Making Differences a Strength in Your Marriage

Like tiny black gnats at a summer picnic, differences can buzz in your ears. They can threaten to rob your relationship of its peaceful, accepting love. As Sam Levenson said, “Love at first sight is easy to understand. It’s when two people have been looking at each other for a lifetime that it becomes a miracle!” Someone else has said, “Love is blind, but marriage is an eye-opener.”

As you move past the honeymoon, all those differences, those little”eye-openers,” begin to affect your marriage. Ironically, differences are those wonderful qualities that attracted you to each other when dating. He was outgoing, she was shy. He was a big spender, which made her feel special because she was a tightwad. And he was a hard worker, she was impulsive and fun-loving. Opposites attract. It works like magnetism.

But when the honeymoon fades and reality sets in, those attractive uniquenesses often become aggravating differences or weaknesses. The very things that initially attracted you to your mate now repel or frustrate you.

As a result, you’re faced with several decisions. First and foremost, you must ask yourself, “Will I continue to accept my mate in this particular area of difference? Or will I withdraw a portion of my acceptance, thereby driving a sliver of rejection between us?” You cannot ignore the question, because the differences won’t go away. If you can’t accept that quality, you’re rejecting (silently or verbally) your mate. And his self-image will suffer. Your only 2 options are to accept him or reject him.

If you choose acceptance, then another question arises: “How do I live with this difference?” The answer is multiple choice, with more than one, or possibly all, of the choices being correct in any given situation.

Begin by praying for yourself. Ask God to make you content with your mate as he is. Pray, too, that God will show you the positive side of your mate’s apparently negative quality.

In our relationship, Dennis and I (Barbara) are extreme opposites on the impulsive/disciplined scale. When we were first married his impulsiveness tended to drive my disciplined nature crazy. I felt that we had no order, no schedule, no budget, and no regular devotions.

I remember praying diligently for God to change all these things I didn’t like. Then I realized what really needed to be changed was my attitude. God did change my perspective. In time I began to see how much I needed Dennis’ impulsiveness to balance my discipline.

Ask God to examine your attitudes and your motives, and to give you a greater capacity to understand and accept your mate’s differences. This step my be necessary before God can use you to elevate your mate’s self-image.

2. Talk about it with your mate.

Ask for the privilege of being heard. Tell him you’re not rejecting him in this area of difference. Tell him you remain committed. Assure him that he’s loved no matter what. One thing we’ve learned in our marriage is that at some moments we’re teachable. But at others learning is unlikely. Unless it is obvious, we determine whether the time is opportune by asking.

If you find it’s not the time to talk, leave the subject alone. Don’t try to force an issue with which your mate isn’t emotionally ready to deal.

You also may discover that the territory you’re about to encroach upon is marked “NO TRESPASSING.” It may be off limits at this point in his life. If so, be satisfied with exploring small bits of land at a time. Don’t hope to cover the whole country in one evening. Go slowly.

If your mate is willing to talk about the difference that’s bothering you, share your feelings without accusing him and pointing the finger of blame. Don’t be critical. Let him know you’re not perfect. Tell him that you understand him, or want to understand him, in this area. Realize, too, that we all have weaknesses or tendencies that we’ll never completely conquer. Because of our fallen nature, perfection will never be ours until we reach heaven.

If your mate considers the difference a weakness, ask if you can help. Then, at the end of your discussion, remind your mate again of your commitment and acceptance. We call this the bookend principle. Just as bookends are used to prop up books that contain truth, so will your reminders of complete acceptance at both ends of the discussion. They will support the truth of what you have said. And it makes the truth easier to hear.

3. Tutor you mate with his permission.

As a couple, we continue to assist one another with many areas. This includes punctuality, patience with children, planning, feelings of discouragement and depression. It also includes one partner’s tendency to be impulsive and the other’s tendency to be too controlled. We’ve found that many opposites that attracted us when we dated, became repellents after we married. But they are the very things that have balanced us. Our differences have made us more effective as a couple than we ever could have been alone.

One area which I (Barbara) have assisted Dennis is his public speaking. Early in our marriage, I noticed he was making some obvious grammatical errors as he spoke. I felt free to offer help because, on more than one occasion, I had told him honestly that he communicated well.

One evening after he had spoken, I asked Dennis if I could make a suggestion that might make him more effective as a speaker. He said, “Yes.” Although my critique was a little threatening, he confessed he didn’t do well in English in school. He said he welcomed my suggestions.

Several years later, on the way home from another speaking opportunity, Dennis told me, “I still want you to help me with my speaking. But I’d like you to wait a little while before you tell me the cold, hard truth.”

I realized my technique of helping him needed refining. I had become truthful too quickly. My “Help” became a discouragement. That is because it wasn’t seasoned with enough praise or separated far enough from the actual event. Had I not modified my recommendations, I would have crossed the fine line separating acceptance from rejection.

If your mate has granted you permission to help, ask God for wisdom in how to help. Offer your assistance in such a way that your mate experiences your acceptance and in no way senses rejection.

4. Ignore Some of the Differences.

Some of the differences that annoy you may not be weaknesses in your mate. Commit those differences to the Lord in prayer. Asking Him to give you peace and contentment to live with them, even if your mate never changes. It’s important to accept him “as is,” without pressure to change. Choose to ignore the differences that are off limits and seemingly beyond change. And rejoice over the many benefits you enjoy because of your partner’s strengths and your relationship together.

The first portion of this article is from the book, Starting Your Marriage Right: What You Need to Know in the Early Years to Make It Last a Lifetime.

It is written by Dennis and Barbara Rainey, and published by Thomas Nelson Publishers. This book contains 52 brief but instructive lessons on how to stay married in today’s often-turbulent relational climate. In it, Dennis and Barbara draw from their own marriage to present a view of the early years of marriage. It is one that is upbeat and optimistic without glossing over the very real potential problems.

The second portion of this article came from the book, The New Building Your Mate’s Self-Esteem.

It is by Dennis and Barbara Rainey, and published by Thomas Nelson Publishers. This is a book on motivating people to believe in people. Both you and your mate need to be believed in. Your mate needs at least one person in his life who will come alongside him and build him up. You are that person. And he is that person for you. As Dennis Rainey says, “Self-esteem is either the crippler or the completer of the marriage.

Another article that may help you is written by the chairman of Thomas Nelson Publishing, Michael Hyatt. It is posted on his web site. To learn more please go to:

• How Differences with Your Spouse Can Make Your Marriage Stronger

2 responses to “Making Individual Differences A Strength In Marriage”