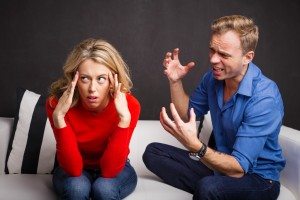 Is marathon arguing a habit that you and your spouse have gotten into? However, it has been said, “A woman has the last word in when arguing. Anything a man says after that is the beginning of a new argument.”

Hmmm, probably, yes, could be. Sometimes the situation is reversed, though, where the man feels compelled to continually have the last word. (I just had to get that in, for some reason.)

But I’ve seen it to be true in many cases (and have been guilty of that one sometimes, myself) —where my husband Steve, will try to drop matters because he just wants to be done with it all… and yet I keep going. Sometimes that’s prudent and necessary, and sometimes it isn’t. I just want to continue because I’m not ready to be done with it.

Sometimes that “last word” IS the beginning of a new argument —thus, the title of this blog comes alive —“Marathon Arguing.”

Different Interpretations to Being “Done” with a Matter

In my husband’s mind, if the conversation is not continuing on, the “case” is more or less settled. It’s a done deal (at least that’s his delusional desire… sometimes, it’s just not that simple).

Many times my wanting to put “the last word” in, almost invites an extension the original argument. So it goes on and on and on and on. I’m tired, just thinking of all of those types of arguments we’ve had. Thank you Lord, that we’ve (I’ve) mostly outgrown marathon arguing (except when it’s truly necessary… but then again, there are other times when we still go off doing that, which we shouldn’t).

What we’ve learned in our marriage is to choose our battles. Yes, I know you’ve probably heard this phrase hundreds of times. But it’s true. Some things are better off dropped or shortened where we agree to disagree. Some things (such as habits or quirks, which irritate one or the other of us) we will never completely settle. That’s where Proverbs 17:14 is applicable, “Starting a quarrel is like breaching a dam; so drop the matter before a dispute breaks out.”

We’ve also learned that sometimes it’s best not to pursue a point AT THAT TIME. It’s better to instead stop, take time to pray, ask God to talk to us individually first, and THEN revisit the topic of contention, later. It may be because the timing isn’t good (that it’s a H.A.L.T. time —when one or both of us is Hungry, Angry, Lonely, or Tired so it’s best to discuss it later), Or it may be that we’re not in a private place to “discuss” the matter. Whatever the reason, sometimes it’s wises not to make this a “marathon arguing” event. We agree with something Dr David Clarke says:

“Always, always, always schedule your conflict conversations. When conflict first surfaces, you both are at your worst. You are immediately angry, defensive, and you will launch right into your dysfunctional conflict pattern. So, when conflict happens and it’s something you will have to talk about, set a time to talk about it. ‘We need to talk about this issue, so let’s meet in the office in 20 minutes and start the process.’

“If it is even 5 minutes later that you meet to talk it out, you are in much better shape. You are much more in control. You will have calmed down to some extent, and you will have not done any damage by talking too quickly and saying hurtful things.”

If you’re the type of person who is a “marathon arguer” because you feel compelled to put in the final word, I wrote a short blog previously, which touches on this issue, appropriately titled, “The Last Word.” You might consider reading it and praying, asking the Lord if this is “just a thing” with you. There may be something you need to learn to stop, or curtail in some way, or whatever He shows you. Marathon arguing can many times hurt marriages.

If you’re a “marathon arguer” because you just feel it’s usually best to “get it all out in the open and settle it while the issue is still hot in your mind,” BEWARE. You may be causing more damage to your relationship than you realize. It may be that YOU feel this way. But if it’s not working in a productive way that will ultimately bring peace back into your relationship, be careful. If this becomes an emotional wrestling match where you become opponents, rather than partners, then you need to approach this matter differently.

Apply wisdom here. If marathon arguing works in a healthy way for your relationship, then go for it. But if it’s not working, STOP. Either stop it all together, because it’s not wise to continue, or take a break and revisit the subject again at another time (or at other times, if it needs more than one “session” together). You may even need a marriage coach or a counselor or some resource to help you learn the skills you need to resolve your conflicts in healthy ways.

The following scriptures can be applied at times, during different circumstances. It’s true; sometimes it’s best to work through a situation, then and there. But other times it isn’t. A wise person and especially, wise marriage partners can discern which is best.

Prayerfully Consider What We’re Told in the Bible

• “Let us make every effort to do what leads to peace and to mutual edification” (Romans 14:19).

• “What causes fights and quarrels among you? Don’t they come from your desires that battle within you? You want something but don’t get it. You kill and covet. But you cannot have what you want. You quarrel and fight. You do not have, because you do not ask God” (James 4:1-2).

• “Words from a wise man’s mouth are gracious, but a fool is consumed by his own lips. At the beginning his words are folly. At the end they are wicked madness. The fool multiplies words” (Ecclesiastes 10:12-13).