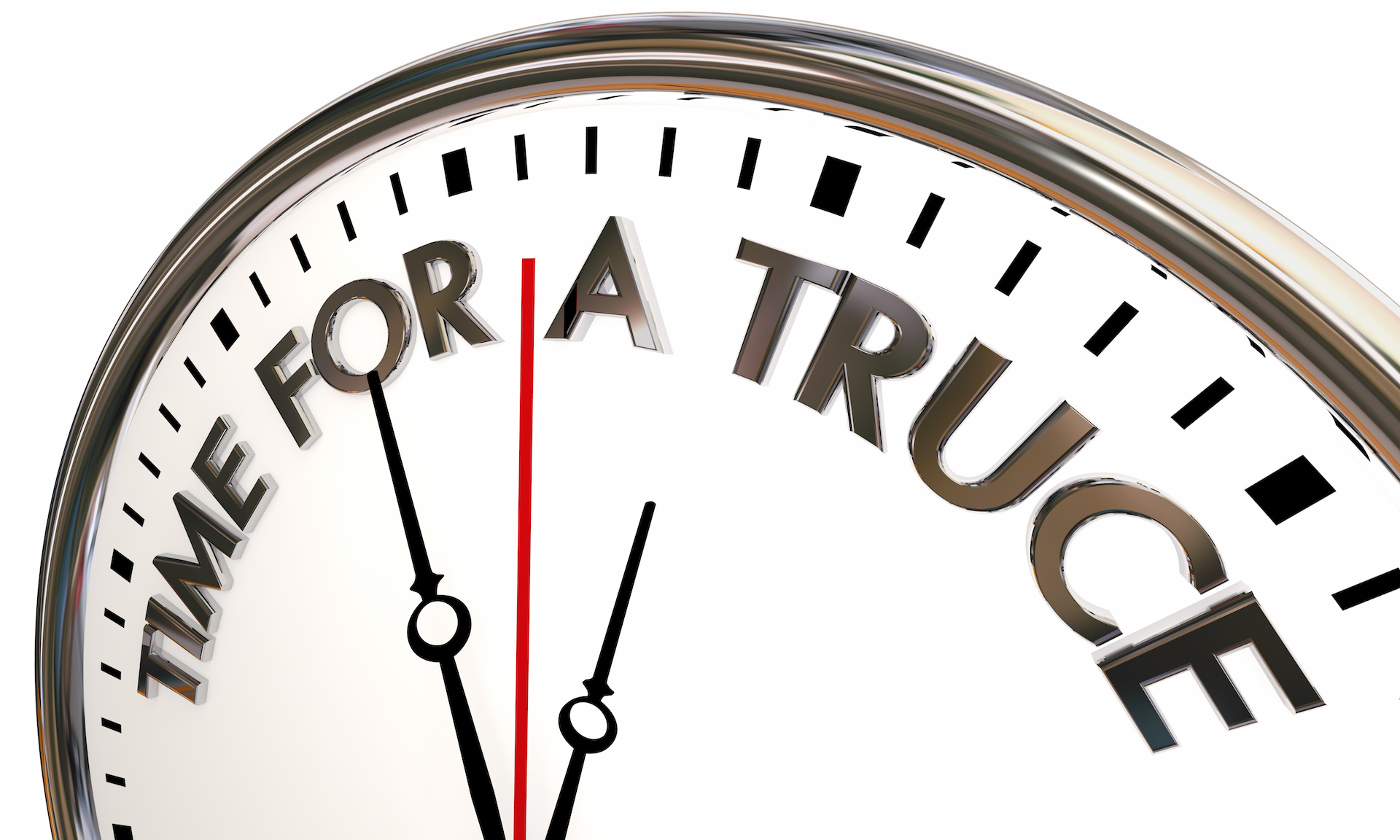 Are you and your spouse arguing to a point where it is becoming, or it is unhealthy? If so, perhaps you should consider calling a marital truce.

A truce is a “suspension of fighting or hostilities for a specified period of time by mutual agreement of the warring parties.” And that’s what marriage conflict can get to sometimes. We can become “warring parties” with our war of words and/or actions. And that is certainly NOT the reason we married. We are to marry our ways—to build relationship bridges between us, not destroy them.

Now, we’re not talking about stonewalling, or totally avoiding the issue you are fighting about. It is agreeing to suspend it for a period of time for practical, specific reasons.

There are many reasons why we may need to call a marital truce. It could be:

• The timing is wrong. It may be a H.A.L.T. Time when one or both of you is Hungry, Angry, Lonely, or Tired. Those are times when disagreements can go in very wrong directions. It would be best to call a truce and talk about the issue at a later time.

• You are both too far apart in your differences; and you need to take a time out to pray and think about different ways you can each bridge your differences some way. We’ve done this a number of times. It’s amazing how God can help us as we pause, pray, and lean into God.

• You’re starting to approach your issues in unhealthy ways. You’re headed in a direction that could be downright toxic. There is a saying that goes something like this, “It’s all going to hell in a hand basket.” That means that we are delivering the enemy of our faith our situation by the way we’re handling it. We’re voluntarily handing our marriage issue over for our spiritual enemy to wreak havoc. And there is no way it can go in a Christ-honoring way when we do that. We get so caught up in making our point that we usher in the enemy and also treat our spouse like he or she is the enemy. As Christ followers, we should NOT be treating each other this way.

You’ve probably heard it before. Perhaps you’ve been involved in the war of words that too many married couples throw at each other like verbal grenades.

“’I hate you!’ ‘I don’t know why I married you!’ ‘You miserable slob!’ ‘I’m so mad I can’t even stand to look at you right now!’ ‘You think YOU’RE mad! You haven’t even SEEN angry yet, you jerk!’ [A verbal grenade we often used is, “I want a divorce!”] If you’ve ever been the hurler of such verbal grenades, then you know how easy it can be to get swept up when the whooping war-cry of anger is sounding off in your mind, even despite your best intentions to remain calm.

“You’re probably also familiar with the emotional carnage left behind once the battle is over. Words of anger—often triggered by a sense of injustice or misunderstanding—lobbed viciously across the battlefield with reckless abandon, have the potential to do more damage to your relationship in a single breath than months of cumulative day-to-day stress could ever do.” (Trish Alderman, from her article, Is Anger Poisoning Your Relationship?)

Sara Groves wrote something that further brings this point home. See if you can relate. (Sadly, we can. In the past, we allowed ourselves to push right into this type of situation.)

“We just had a World War III here in our kitchen.
We both thought the meanest things.
And then we both said them.
We shot at each other till we lost ammunition.”

And that is the truth! Somehow, some way this has got to stop. Unfortunately, too many couples believe that divorce is the only way to stop it. But it doesn’t have to get to that point. TRULY! That’s why we’re proposing that you consider calling a marital truce BEFORE the situation gets this toxic. You may even just be going “sideways” in how you deal with each other. Even so, we can do better than that in our marriages!

Yes, it does. How about you; can you relate? As I often tell people—Steve and I don’t argue as much any more because in our 49+ years of marriage we’ve argued about almost everything under the sun at some point. There really isn’t much left to argue over. Even so, it’s surprising how we can still find things to knit-pick about at each other. We do this, even though we know better.

And we’ve also been learning the importance of calling a marital truce when our irritation with each other starts to go into directions that causes harm to our partnership with each other and most importantly, with Jesus Christ.

The following are a few more important thoughts that Donna Otto wrote about in the book, The Best Thing I Ever Did for My Marriage: 50 Real Life Stories

“After some years of marriage—and problems—David and I came to the conclusion that heated arguments that escalate into toe-chillers are stupid. We can do better than that, regardless of who is right or wrong. But how do you stop the rolling battles before they become deep canyons of separation? We discovered the treasure of the truce.

• “After a marital truce is over, we will talk about the disputed subject again.

We challenge you to try using this tool the next time you get into an argument. See for yourself if it doesn’t lend itself to a more “peaceful” resolution to the situation. We also have an article posted titled, Call a Marriage Peace Conference. You’ll find additional tips in that article. But you MUST apply, that which will work, for it to help your marriage become more peaceable. All the marriage tips in the world won’t help if they aren’t applied!

3 responses to “Calling a Marital Truce”