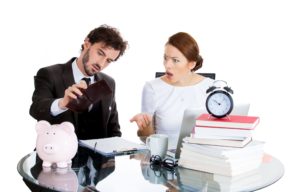 Are you mad over money problems in your marriage? If you are, financial consultant Ron Blue claims that you aren’t alone. He states,

“Money is the reason given in 50 percent of the divorce cases, but I believe money problems are symptoms of an inability to relate to each other on other levels. How you use money reflects your priorities. For example, one spouse may want to furnish the house, while the other wants to take a vacation. They call it a money problem, but it’s really a priority problem, or a problem of communicating about their priorities.”

Its been said, “Money has power far beyond its ability to purchase goods and services. It has the ability to negatively change one’s attitude towards our spouse when we don’t learn how to use it as a marital team.” Haven’t you seen that to be true?

Spending issues sure can cause a lot of division within relationships! Steve and I know that for a fact! It took a lot of years for us to learn how to give and take so we could be united in how “our” money is spent (rather than “his” or “hers”). It’s not that we don’t each have a little to spend our own way, but when it comes to bigger purchases, we’ve made it our goal to be united (and we are).

To look further into this matter, we’ll share a portion of the Marriage Partnership Magazine article written by Beverly Burch titled, “Stop the Money Madness.” In this article Beverly wrote:

You may not want to discuss personal finances but it’s important that you and your spouse learn healthy ways to talk about money. And while the size of your bank account is significant, it’s the meaning you assign to money that makes the biggest impact on your marriage —for good or for ill.

A factor that affects how couples develop a sense of how to spend their money as a marital team is coming to an understanding of how their concept of spending was shaped by the family they grew up in. Spouses may end up clashing because they came from families which handled their money quite differently.

A woman who grew up equating money with security might marry a man from a family of spenders who expressed love through buying expensive gifts. In either case, our own financial style feels right because it reflects attitudes and values that are familiar.

Moving from individual to shared control of finances can feel threatening to newlyweds who are still learning to trust one another in other areas of life. Money can become the focus of conflicts that are really about something else. For instance, a newlywed might not accuse his or her mate of self-centeredness. It’s easier to criticize excessive spending instead.

As couples move into their middle years, no longer does the question “mine or yours?” drive disagreements over money. Instead, the questions multiply as the couple’s responsibilities mount: “Who gets what? How much? When? And how are we going to manage it?” Although some middle-years marriages are troubled by crisis, most simply begin to experience pressure from the weight of having more responsibilities and at the same time the shrinking of available time and money.

Later Years: Contentment or Resentment? As couples move into their later years, they begin to see how their former financial choices have affected their current choices. As retirement approaches, the most important financial question becomes “How are we going to live with our fixed income?” Resentments that weren’t solved in earlier years now begin to surface. At this stage, arguments over money usually take the form of blame for decisions long past the possibility of change.

A negative focus on the past can cause problems with a couple’s ability to work together on current financial decisions. Unless they can let go of resentment and blame, they won’t be able to move on peacefully and productively with the rest of their lives.

Learning to listen to and respect your mate’s money perspective is one way to invest in a valuable commodity —your marriage.

Let me interject here, before sharing more from Beverly’s article. This last point is an important one. The pastor, who married my husband Steve and me gave us great advice before we married (and we thank God he did). He told us to work NOT to argue over money. He said that once we were to the point of arguing, the problem was already at hand and arguing over it would only make matters worse. He said to instead, face the problem –work together to resolve it and then talk about how NOT to get into that predicament again.

It wasn’t to be about playing the “blame game” but rather to figure out how we could work together financially. I’m sure that small piece of advice saved us hundreds of arguments. Because of it, we’ve learned to let go of the past and instead worked towards making better financial decisions TOGETHER to build a better future.

According to Beverly Burch:

Here’s how to get a head start in an area where many couples struggle:

Without self-criticism or self-justification, identify your own relationship with money. What does money mean to you? Does it make you feel powerful, anxious, guilty, loved, responsible or secure? What assumptions and values about money did you develop while you were growing up?

Avoid labeling your spouse’s attitudes as right or wrong. Try to understand one another’s money history. Listen for the hurts, fears, wishes and hopes that get funneled into money. Try to empathize rather than criticize. Honoring each other’s needs can help you respectfully negotiate your financial decisions. Remember, respect breeds trust.

Learn from each other. Temporarily put aside your own beliefs and see what your spouse has to teach you. A saver can learn a new kind of security when stretched by a spouse who exchanges money for present enjoyment, or who finds satisfaction in giving.

Together, list your priorities. What is valuable to you? Identify the top priorities you share and what this means for your budget. In my husband’s family, the adventure of traveling around the United States was a high priority, and their budget was geared toward that. They did without some things, but family gatherings today are enlivened by the stories they’re able to talk about because of their travels.

Get sound advice. Some conflicts over money come from simply not being aware of your options. Ask someone you trust to refer you to a qualified financial adviser who will respect your particular priorities.

Let me tell you that Steve and I are not “financial advisers” but on our web site in the Marriage and Finances topic, we link to some who are, and provide articles and quotes from those who give some good advice. But as with any advice, please glean through what you read and APPLY what you can use and don’t use what won’t work for you.

From Crown Financial Ministries we give you the following thoughts to prayerfully consider,

“Christians who are not experiencing peace in financial matters should reevaluate and ask themselves: Who is in control of my financial decisions? Who is directing my paths? Am I being controlled by God or by my own desires?”

Please make this a matter of prayer. If you aren’t using your money in a way that honors each other and honors God, we hope you will make the effort to start to change things today.