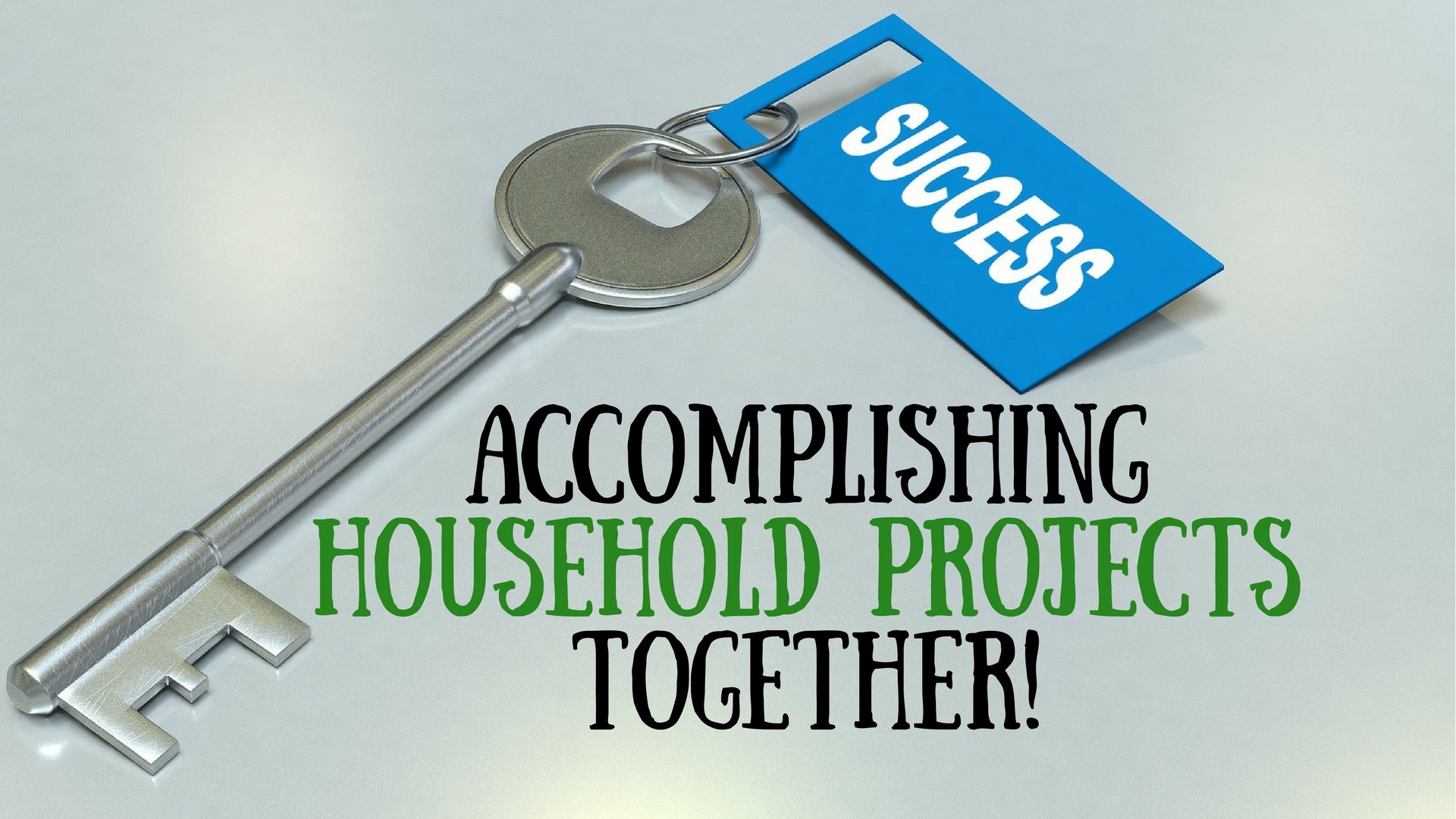 You see the T-shirts around, “I survived the earthquake of ____” or “I survived the tornado.” You also see, “I survived [this event] or [that].” I feel like my husband and I should design and wear T-shirts for things we’ve survived too. One of them can claim, My spouse and I survived doing household projects together. Thankfully, we survived and even did well in this accomplishment. (At least this time we did!)

Now, while Steve and I survived this event in our lives, I’ll admit that on a scale of “biggies,” this isn’t it. We’ve survived MUCH more difficult things. And we know others who are surviving MUCH more difficult events. I get that. So no one has to write in chastising me for over-dramatizing that, which is seemingly small in the grand scheme of events. Grave illnesses, death, unemployment, rebelliousness in spouses and children, etc. can be MUCH worse than what we just went through. Again, I get that. (And thankfully, we’ve survived most of those events too.)

But I believe that many couples can relate to the “fight” of getting through what we just accomplished. I’m talking about working on household projects together without fighting. Perhaps you might be able to relate to the fighting that can happen as you work together on these types of projects.

Working on Household Projects Together

My husband Steve and I are in the final stretch of doing some household projects together. They have sure tested the metal of our relationship. It was one of those “iron sharpening iron” situations.

Neither one of us likes doing household projects together. (That’s probably because they can be stirring pots of tension, and all the more, bring out the differences in our personality and work styles.) And to be truthful, I entered this work project with “fear and trepidation.” This is because we were going to do projects that we aren’t good at (painting and changing things around to function better for us). And also, there’s one project, which we’d never done before.

My fears were well founded because we didn’t do this together very well in the past. We eventually came to realize that the projects weren’t half as difficult if we hadn’t fought over them. Our fighting about stupid matters made it all worse than it would have been.

Now mind you, we had just finished a HUGE project of renovating the Marriage Missions web site. It was costly in many ways —especially in how much work it involved. And we also have some physical issues going on, which brings even more challenges. But we did it without fighting, which is great! However, we were tired and worn out.

So, as we headed into this project, I should have realized that we had a big handicap going. We should have been “on the alert,” for tension ahead. This way we could put intentionality into NOT allowing petty things to divide us. But alas, we just plowed into it —oblivious, and sorry later.

On the first full day of working on these projects, we just couldn’t connect. We kept clashing on everything we did. From morning to night, we acted more like opponents, rather than a team working together. It was ridiculous. We usually don’t do this, but we sure did that day.

It’s not only the work that wore us out, but we bickered and squabbled about a whole bunch of nothing all day long. It’s like a rain cloud was hanging over our heads ready to let loose every time we turned around. It was ridiculous. I can barely tell you what we fought about —they were such stupid little things. And yet we kept at it.

Stop and Back Up and Pray

Someone who was really in tuned would surely have suggested that we stop, back up and begin our day of working on these projects by praying for unity. Actually, WE should have been the ones “really in tuned.” But we sailed right past that one. And what’s ironic is that we usually do. We usually start our day out by praying together. But not on this day. We just started right in on working and started right in on bickering.

See? It goes to prove that even those who know better don’t always do better. It’s sad but true. I confess this to you. We should have followed through with the advice given in the Featured Video, Simple advice we sometimes NEED!

I think the main reason we didn’t snarl at each other that night is that we were too tired to do so. We both fell into bed totally exhausted, from working so hard. (It was most likely, from exerting so much energy on continually stressing with each other.)

The next morning, I woke up several hours before Steve. After praying I came to the conclusion that I wouldn’t go through another day like that again. We were living out the scriptures, “Better a dry crust with peace and quiet than a house full of feasting, with strife.” (Proverbs 17:1) “It is to a man’s honor to avoid strife, but every fool is quick to quarrel.” (Proverbs 20:3) And we were sure acting like fools.

Finally United in Thoughts and Actions

Little did I know that Steve had come to the same conclusion before he came out of the bedroom. When he walked into the kitchen, I told him, “I can’t do this anymore. I don’t have the strength to do what needs to be done with all of this arguing that’s going on between us.”

Steve once again became my hero when he stopped me. He insisted that we sit down to talk. Then he said, “Cindy, I’m sorry. When I woke up this morning I realized that we started the whole day out wrong yesterday. We needed to pray for unity. Plus, we needed to be intentional in working together on the projects AND on doing them in a peaceable, united way. Will you forgive me for all I said and did that I shouldn’t have?” He then went on to confess specific things and asked that we pray together.

I knew he was right. I then confessed to my part in all of this. We talked, confessed more. And then most importantly, we held hands and prayed together. We then hugged and sealed it all with a kiss.

It’s amazing the difference that made. Why I’m amazed, I don’t know. I know how God can help us to take our eyes off of ourselves and onto what’s most important — thinking together. We won’t always think alike, but we can think together.

Learned From the Past

And if one time of uniting and praying together doesn’t work, we’ve learned in the past to again put intentionality into joining together again (and again and again, if needed). We do this until we strip away our selfism and think together.

This time we were ready to do that. This time we were approaching matters in a way that was wise. We were united with each other and with God. We put energy into doing what needed to be done, instead of wasting it on foolish pettiness.

Well, that day, even though we worked even harder than the day before, we did well. We almost completed the projects. Each of us were exhausted, but in a good way. We know we conquered not only the work, but also our attitudes. We did it in a united way. This time we lived out the scriptures that said, “Love is not rude, it is not self-seeking. It is not easily angers: it keeps no record of wrongs.” (1 Corinthians 13:5) We worked hard and through our united front, we loved well.

Thank you Lord, for helping us to wake up to truth, rather than to keep going on doing what is wrong!

Learn from Our Mistakes

If you have household projects to work on together, please learn from what happened to us. Start out united in prayer, and you can work better together. And when you do it wrong, here is my/our advice to you, straight from God’s Word:

“Confess your sins to each other. And pray for each other so that you may be healed. The prayer of a righteous man is powerful and effective.” (James 5:16)

“Do not grieve the Holy Spirit of God, with whom you were sealed for the day of redemption. Get rid of all bitterness, rage and anger, brawling and slander, along with every form of malice. Be kind and compassionate to one another, forgiving each other, just as in Christ God forgave you.” (Ephesians 4:30-32)