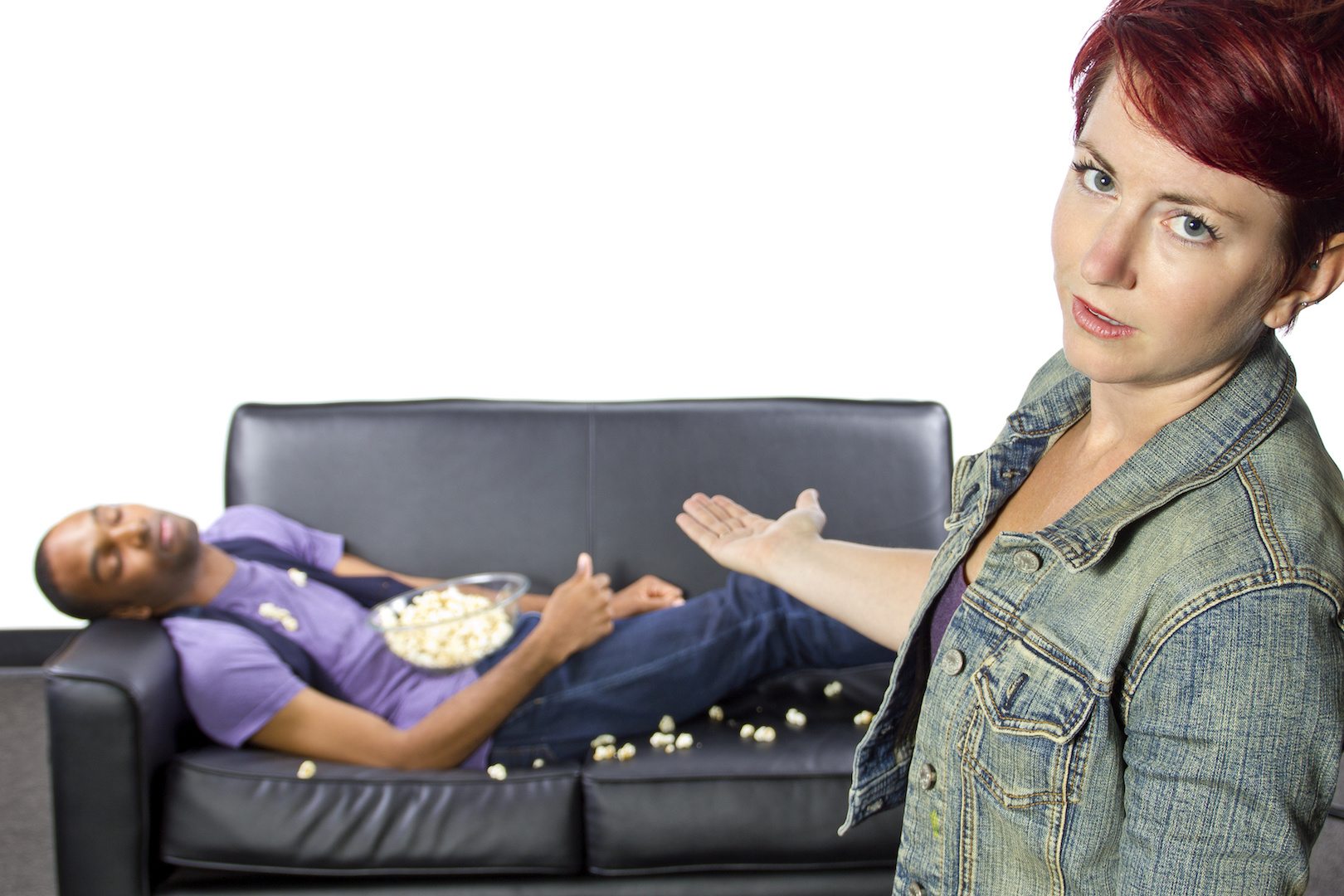 So, what do you do if you’re someone who likes things nice and tidy, but you are married to a messy spouse? This is a dilemma that many married couples encounter after they marry. And who would guess it would be such an important issue before marriage? We didn’t. Most couples don’t think much about it before the wedding. But they sure do afterward!

In our marriage I’m more of the tidy one and Steve can get messy sometimes. With Steve, it’s more about little things left here and there. I call them “Steve’s droppings.” I can often tell which room he has been in recently. He leaves little things here and there. And for me, this is irritating. But I have to say that he is much better about this today than he was in the past. I know he usually makes a concerted effort to clean up after himself. But then there are times…

The Tidy VS Messy Spouse

Many of you contend with much more of the tidy VS messy spouse behavior than we do. And it’s truly irritating. That’s why we’re writing about this subject in this Marriage Insight. We want to give a few insights that you may not have thought of before. First, there is the common suggestion that is given, which is, if it’s a problem, hire a maid or a cleaning person. But that isn’t plausible if your budget won’t allow it. But another reason is one that Sheila Wray Gregory brings up on this issue:

“I think the reason that a maid can’t always solve the problem is that when we’re having conflict over housework, there’s actually something bigger going on. And it’s this: Most conflicts in marriage aren’t about the issue itself. They’re about the question: do you really love me? Do you value my opinion? Do you care?” (From the article. “When Mr. Clean Marries Mrs. Messy”)

We often dial most ongoing problems down to that issue, of whether or spouse really cares about us or not. That’s something I’ve thought about and have said to Steve before. “If you really cared about me, you’d do something about this.” But truly, it isn’t that he doesn’t care about me, he just doesn’t think it’s as big of a deal as I do. On his relationship radar screen, he thinks it’s a minor issue. It’s also a lifestyle tendency.

The Messy Spouse and Tidy One

Counselor and blogger, Eunia Lee writes (and we agree):

“Neatness and messiness are not generally issues of right and wrong. They are matters of personal styles and tendencies. Therefore, each couple’s home must represent well both partners’ styles. The process of bending and adjusting in order to allow for a style that is different from your own presents an opportunity for growth.” (From the article, He’s Messy. She’s Tidy. Let’s Call The Whole Thing Love)

And it does take growth to go the extra mile for your spouse. That’s especially true when it’s not a big deal to you, but it is to your spouse, so you do it anyway. Also, sometimes it doesn’t even register with you that there is a problem. I’ve seen that Steve doesn’t even seem to notice it when he leaves something behind that he had taken out and used. I’ll point it out and most often he’s actually surprised. He cleans up most of the mess, and in his eyes it looks pretty good. But it isn’t done as far as I’m concerned.

Tip for Dealing with the Messy Spouse

A gal I know said that she deals with this issue in a low tension way. She used to get real upset, but the Lord helped her to put it all into perspective. Her husband is a good man. He’s honest; he’s a good husband, father, is trustworthy, and is very likable and lovable. He could do worse things, so why make such a big deal out of it?

So what she does now is, if she sees he leaves any type of mess behind she asks him, “Are you all done in here?” That’s all it takes to get him to go back in and clean up his mess. As she says, it’s not worth it getting all upset about such a minor issue. He overlooks many of her minor issues. That’s all a part of marrying our lives and lifestyles together.

In recent years I have come to realize that I need to just lighten up a bit. I can be a bit too picky about things being just so. Steve is trying to be better about this. It’s a matter of compromising and letting go of the small stuff. But what’s great is that Steve is realizing that he shows love to me by trying harder to keep things tidier. I equate it with receiving flowers. I’d much rather he clean up after himself than receive flowers. That’s because I know it takes extra effort on his part to notice if he has cleaned it ALL up after he has made a mess.

For the Messy Spouse

So, what can you do if you are a tidy spouse living with a messy spouse and it’s causing friction in your relationship? Here are a few tips that appeared in Eunia Lee’s article, “He’s Messy. She’s Tidy. Let’s Call The Whole Thing Love“:

For those tending toward messiness:

• Avoid negative labels and a judgmental attitude. For example, avoid thinking ‘He’s a control-freak!’ or ‘She’s too obsessive!’

• Avoid mind-reading or making assumptions. For instance, avoid thoughts like ‘He’s trying to control me!’ or ‘She’s trying to turn me into a robot!’

• Be empathetic. Your spouse actually suffers more than you in a messy space.

All of this is summed up in the scriptures that talk about being kind, considerate, and going the extra mile for one another. Plus, we’re told in scripture to “consider one another as more important than ourselves.”

And then Eunia Lee goes on to write:

For those tending toward tidiness:

• Avoid negative labels and a judgmental attitude. For example, avoid thinking, ‘He’s so lazy!’ or ‘She’s a slob!’

• Avoid mind reading or making assumptions. For instance, avoid thoughts like ‘He wants me to clean up after him!’ or ‘She doesn’t care about her things, or me!’

• Avoid negative communication patterns such as nagging, speaking harshly, or holding in your frustrations until you blow up.

• Be patient if your spouse forgets to address your need for tidiness. Remember that tidiness is not as automatic and natural for your partner as it is for you. You must love your spouse even more than you love tidiness.

Eunia Lee includes a lot more detail about all of this in her article. We left out many of them so you can read them (which we recommend you do) in the Linked title preceding these tips. It’s a good article!

• Talk Calmly About It.

• Define Dirty and Messy Together.

• Work out a Compromise Together.

•  Use Pictures and Lists to Define Expectations.

Sarah suggests that after compromising on how clean each room should be, take pictures of the rooms so you can refer back to what you both agreed upon. You can read more details in the article:

• HOW TO LIVE WITH A MESSY PERSON

And then, concerning living as a tidy spouse with a messy spouse, here are a few tips from a Focus on the Family article titled, “Spouse is a ‘Messie'”:

• “Don’t attack your mate. When you attack your spouse, you crush his or her spirit. Confront the problem; don’t belittle the person.”

• “Encourage your spouse’s growth. When you see positive progress taking place, offer praise and expressions of appreciation for your mate’s efforts.”

And lastly, here is a link to another article that will give you even more insights:

We hope this helps. We realize that this isn’t the biggest of issues you can deal with in marriage. But it sure can be an irritating one if you haven’t worked this out together in a way that you are both reasonably content.

Plus, we realize that in many cultures, this isn’t even an issue. The wife is expected to do all of the housework. For you, there are other ways in which you would make this work for your marriage. But hopefully, this Insight has helped you in some ways. It’s a matter of compromising in working as a team in the ways it works in your marriage. We hope you will.

5 responses to “The Tidy VS Messy Spouse”