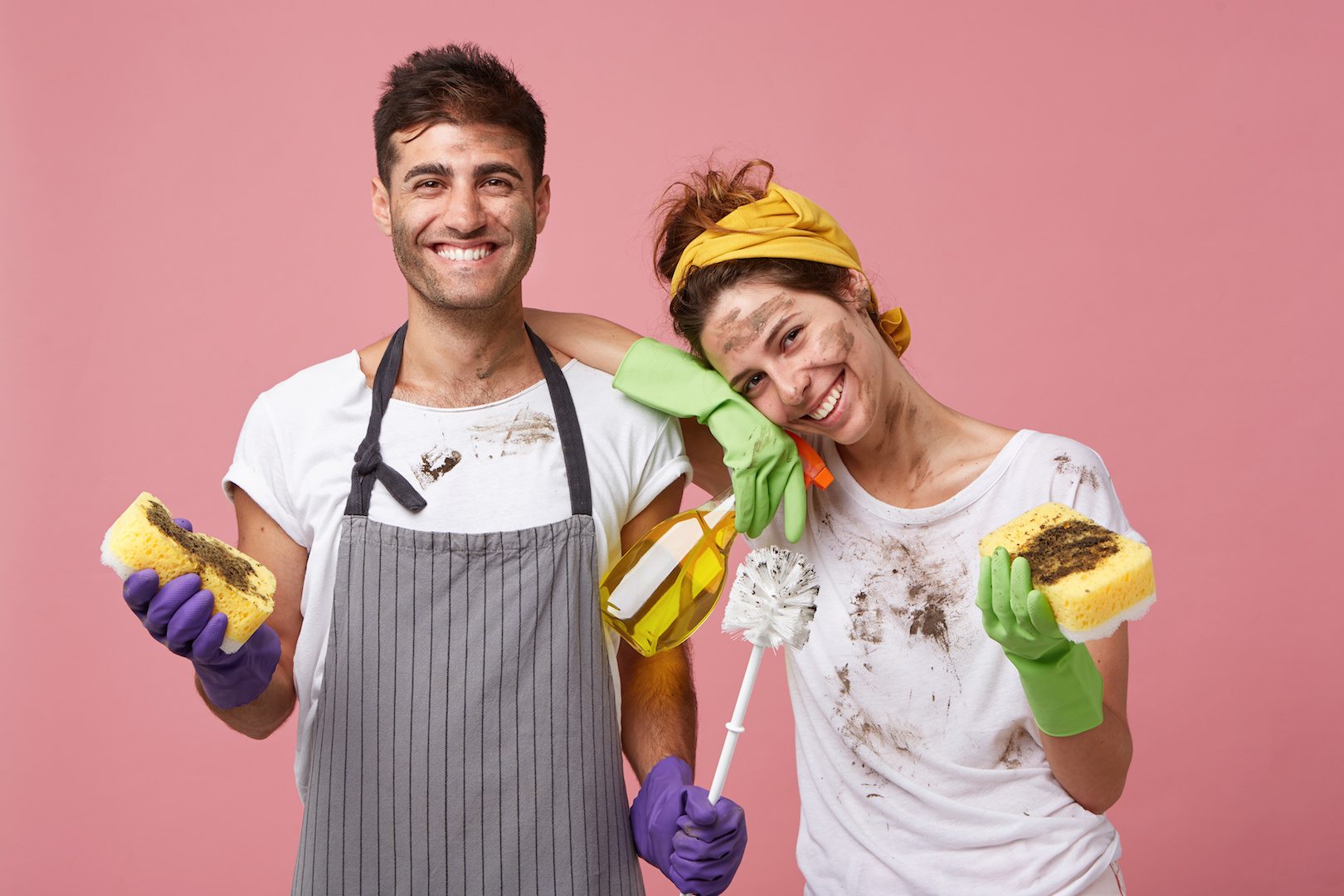 Working together as a team—we know we’ve talked a lot about this in past marriage messages, but SURPRISE, we aren’t done! And we never will be. This is because we so deeply believe that married couples are supposed to work together as a team. This is all a part of “cleaving” together in marriage (biblically speaking).

One of the many areas of marriage in which we should work together as a team is in the area of doing work around the house. Yeah, we know “work” can be seen as a dirty word. But it’s a necessary subject to talk about because it leads to so many arguments. It’s actually among the top 5 things that married couples reportedly most argue about.

We know that in different parts of the world, it’s “assumed” that the wife is supposed to take care of that aspect of marriage. But our world is changing. Husbands and wives are taking on different responsibilities. Many times both spouses are working outside of the home. That makes getting housework done more of a problem.

Even so, research shows that wives are still the ones who do the bulk of the housework. This happens even if she works a full time job. “We have evidence now that even in dual career couples where the wife earns as much or more, she still does the burden of the house work,” said Neil Jacobson, a University of Washington psychologist. Needless to say, this has caused problems in many households.

If, as a married couple, you’ve decided together that this arrangement works for you, then that’s fine. That’s what’s important. You’ve both decided that this is what works. But if it’s something that one has imposed upon the other, then you really need to together about this (if you can).

Pitching in To Help Each Other

Author and speaker Dennis Rainey, who heads up the ministry of Family Life Today challenges and questions on this issue. He addresses men saying, “There is no better way to serve your wife than to understand her needs and try to meet them. If she works outside the home, do you help with meals and household chores?” This question can also be asked, “And, if you see that she is extremely busy with the children, do you pitch in and help?” And how about you women? Those same questions can be turned around to address the wives. Wives, do you find ways to help ease his load to the best of your ability?

To help you a little further on this subject, you will find quotes below written by different “experts” on the issue of working together. Please read and prayerfully consider, as it pertains to accomplishing work that needs to be done around the house.

Working Together As a Team:

“In marriage, you sometimes forget you’re on the same team as your spouse. Your spouse is not your enemy or your competitor. The two of you are one. If your partner wins, so do you. If your spouse loses, you do too. Your fates are linked. It’s amazing what can be accomplished in your marriage when you work together. You cover one another’s weaknesses and reinforce each other’s strengths. When one stumbles, the other helps him up. This is what marriage is all about.” (Dr. Steve Stephens in the Crosswalk.com article, “For a Great Marriage: Work Together as a Team”)

Here’s a point to consider that we believe makes sense:

“The biggest mistake you can make in your quest to have your spouse do more chores around the house is to ask for help. Asking for help implies that the responsibility for the chores belongs to just you. In actuality, chores around the house should be shared responsibilities, and doing a good job dividing up the housework is essential to ensuring a happy marriage.” (Sheri Stritof, from Thespruce.com article, “Chores, Chores, Chores”)

“Sit down together and make a list of the chores that each of you absolutely hates to do. What one hates, the other may be able to tolerate. If both of you detest the same chore, then figure out a way to compromise in getting this particular unpleasant task done. Or perhaps you could tackle the horrid chore together, as a team. You could also find some money in your budget to hire someone to do that task.” (Sheri Stritof, from Thespruce.com article, “Chores, Chores, Chores”)

“Sometimes having a bit of open communication about what things need to be done and when is enough to get a spouse motivated. Forget nagging. It’s just insulting for him or her and demeaning for you. Instead, talk about how you will both meet the housework needs. Much like trying to get children to help with their own chores, for your reluctant spouse, you can develop schedules and systems and remind your spouse that the more equally you share in responsibility, the less exhausted you’ll both feel and the more inclined you’ll both be to enjoy in some romantic quality time together.” (Kristi, from the Dailyhousecleaningschedule.com article, “Getting Your Spouse to Help with Chores”)

Remember when working together:

“Smooth routines are made, they don’t magically appear.

“The idea that we’d ever fight about something as insignificant as laundry seemed laughable. But fight we did. And not just about how to fold shirts. We argued over dishwasher-loading (I like to pack ’em in, he leaves lots of space), what constituted a ‘clean kitchen’ (he wants the floor swept; I like counters clear), even how to categorize canned goods (I want like items together; he figures as long as everything is in the cupboard, why sort?). And it got worse with babies in the equation.

“Figuring out how to reduce quarrels to save time and emotional energy for the stuff we really wanted to do took some work. The essence of what we learned first? Take time to make time. Tedious as it seems, dedicating a few ‘dates’ to talk about pet peeves and the nitty-gritty of who’s going to do what goes a long way toward building faster, more efficient routines.” (Monica Rogers, from the Chicago Tribune article, “Housework and Harmony”)

“It is so easy for a couple to get out of sync and work against each other. Every couple needs to understand this concept and instead embrace the idea of becoming intimate allies. Allies communicate and defend each other. They coordinate their efforts and help each other out.

“Marriage is like a three-legged race: Try to push ahead without your partner’s cooperation, and you both fall. Work together, and you both do well.” (Dr. Steve Stephens in the Crosswalk.com article, “For a Great Marriage: Work Together as a Team”)

“‘Early in our marriage, we found we were arguing about what and how things were getting done around the house,’ recalls Mitch Chaney. Rather than go 50-50 on all chores, ‘we first broke chores down by level of pain, making lists with most-hated chores at the top,’ says Susan Chaney.

“Interestingly enough, the lists allowed each partner to do what they were best at, with enough yin and yang in the remaining list items to allow each Chaney to opt-out of dreaded chores. ‘I hated washing clothes but didn’t mind folding. He disliked loading the dishwasher but didn’t mind putting dishes away. Fitting the two lists together let us play to each others strengths,’ Susan says. And on those things both dislike? ‘You do it together or pay somebody else to cover that one for you.'” (Monica Rogers, from the Chicago Tribune article, “Housework and Harmony”)

“Parceling out household chores carries much more meaning than merely keeping the house clean, the grass cut and the car running. It actually represents an attitude of the heart. Our willingness —or unwillingness—to help out around the house speaks volumes about the value we place on our spouse.” (Judith Balswick)

In the matter of working together, remember:

“In the book of Genesis, we’re told that the two shall become one. That is what marriage is all about. Togetherness becomes ‘twogetherness’ when two ‘me’s’ submit to each other and become one ‘we.’ As you do this, you become stronger, closer, more efficient, more in sync, less lonely, and less stressed. And as an added bonus, your marriage will become much more enjoyable.” (Dr. Steve Stephens in the Crosswalk.com article, “For a Great Marriage: Work Together as a Team”)

“Love must be sincere. Hate what is evil; cling to what is good. Be devoted to one another in brotherly love. Honor one another above yourselves.” (Romans 12:9-10)

Our love and prayers are with you as we strive to make our marriages the best they can be!

— ALSO, on the Issue of Working Together —

You may find the following article (and the ones that are linked within it) helpful to read, as well:

• HOW TO CREATE A FAIR DIVISION OF LABOR