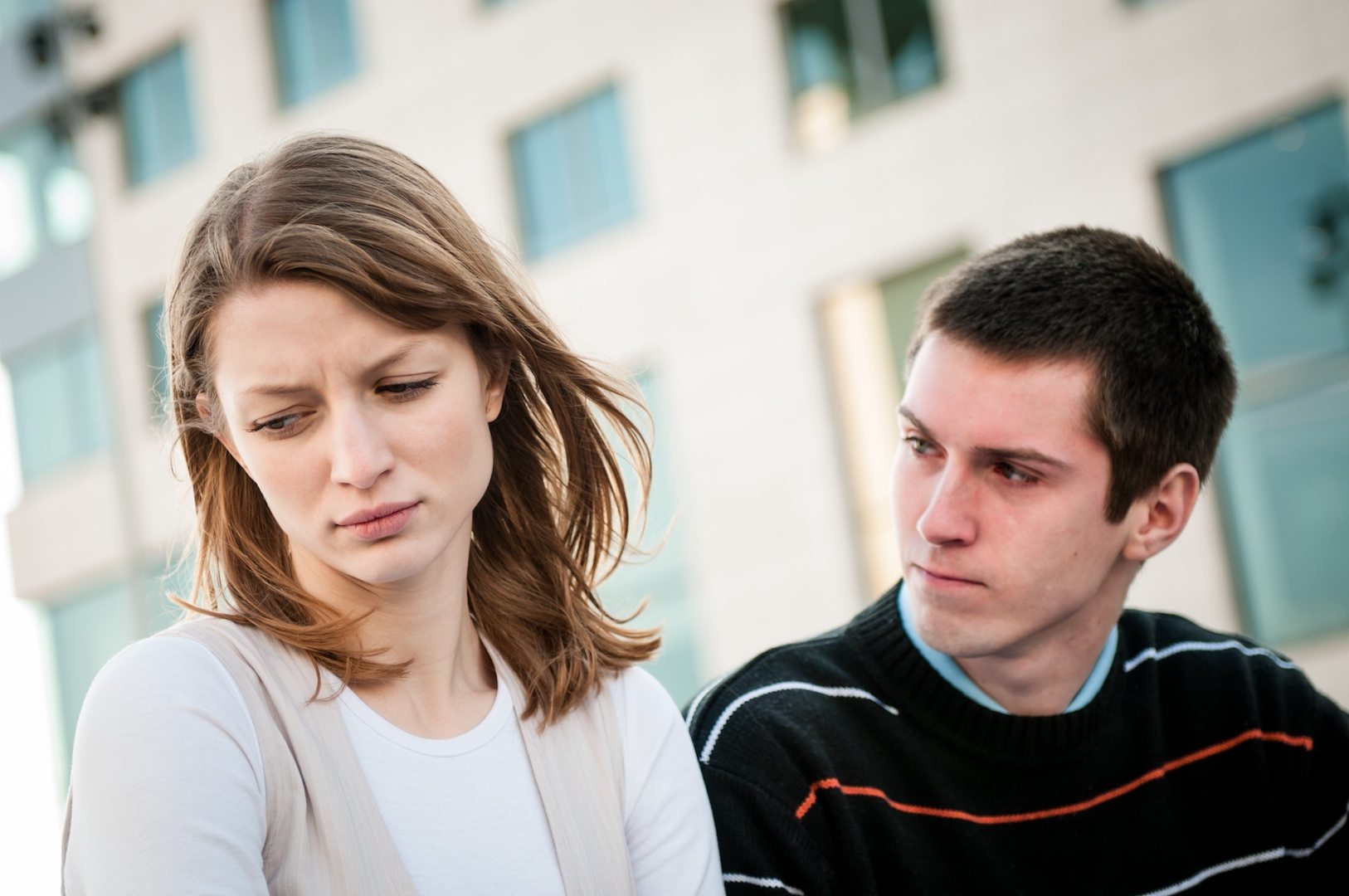 It’s absolutely common, at some point, to find yourself in a place where you’re feeling offended by your spouse.

“Sooner or later …okay, sooner …it’s going to happen. You’re with your husband/wife and someone (not you, right?) gives offense. A comment, a glance, an action …they come in all shapes and sizes but, regardless, no marriage gets a pass when it comes to offenses. It’s what you do with those offenses that determines the nature of your marriage, going forward.” (Matthew L. Jacobson, from the article, Moving Past Offenses in Marriage)

We totally agree with Matthew. And it is what you do with those offenses that are most important. Sometimes you need to talk seriously (or less seriously) about them. Sometimes it’s best to drop them (choosing your battles), and other times it’s a matter of not grabbing onto the offense in the first place. Steve and I believe that more and more people are picking up offenses too readily in this world and marriages today. It’s growing to epidemic proportions.

Feeling Offended by Your Spouse

This leads us to the book that we read titled, Unoffendable, written by Brant Hansen. We believe it can be a life-changing, marriage-changing book for those who read it. Too often we take too much too seriously! Before marriage we don’t pick up near the amount of offenses we do afterward. We let a lot more slide. However, most couples appear to change that behavior and mindset after marriage. But should we? Just because we’re together more, it doesn’t mean that we have to pick up so many offenses.

“I heard Patricia King say, ‘Offenses aren’t given, they are taken.’ And it’s true. It is our choice whether or not to agree with satan’s suggestions to get offended about the ‘raw deal’ we got. And taking an offense is a great way to hinder the progress God is making in your life and work. You can get stuck as you brood on it. That old artist’s lie that ‘no one understands me, it’s me against the world’ can pop up.” (J. Scott McElroy from the Crosswalk article, “The Art of Not Taking Offense”)

That’s a good term for what we too often do. We pick up an offense, take it, and then we “brood on it.” We go places in our minds that we really shouldn’t go. We nurse and rehearse that, which we shouldn’t even touch. In the Bible we’re told to:

“Destroy arguments and every lofty opinion raised against the knowledge of God, and take every thought captive to obey Christ.” (2 Corinthians 10:5)

We often know better than to keep imagining and arguing in our mind about certain things. God lets us know this in our conscience. But we do it anyway, even though we’re to “take every thought captive.” Get rid of them, throwing them away from us as often as they try to land upon us to cause us problems.

CHOOSING to Not Be Offended

Brant’s premise is that we need to “choose to be unoffendable, and we’ll flourish the way God intends.” He supports this with a lot of scripture, and common sense principles. Even though this isn’t a marriage book, it sure applies! It applies in all aspects of life. It’s important to remember that:

“There are examples in the scriptures of people who had opportunities to be offended but chose not to be offended. Joseph (Jacob’s son) had opportunity to be offended in his brothers but he chose not to be offended. He saw their actions against him as what God allowed in others to save their family from the imminent famine. Also Jesus was not offended by the actions of those who crucified Him. He saw it as what must be done for mankind to be saved. Instead in Luke 23:34, he asked God to forgive them, for they knew not what they were doing.” (Ngozi Ifeoma Nwoke, in the Steps with God article, “A Christian Attitude Towards Being Offended”)

Joseph let go of offenses, and Jesus did too. And so did many others as they looked to God. Here’s something that Brant says on the issue of letting go:

“I can let stuff go, because it’s not all about me. Simply reminding myself to refuse to take offense is a big part of the battle. Truth is …most of the time, whatever it was that we were taking personally, it really didn’t have to do with us. …It happened. We can take it personally if we want, but why?”

That’s true—especially when he says, “Simply reminding myself to refuse to take offense is a big part of the battle.” It sure has been working for us (and for others who have read about and embrace this point, as well). It’s so freeing to let go and release offenses.

I remember a while back when Steve was verbally picking away at me. His irritation didn’t make sense. Then I realized—this wasn’t about me. He was irritated at something else that had happened to him earlier. I was just a convenient person to take it out on—actually I wasn’t.

I remember looking at him saying, “Did something happen earlier at work that got you upset?” He just stopped and looked at me. I said, “I’m not going to pick this one up because I don’t think you’re mad at me as much as you’re upset about something else.” He thought for a minute and agreed that he was upset with something else. We talked about it and our evening sure improved. Both of us were relieved of the stress afterward.

Now I confess that I don’t always approach these types of matters as “wise” as this. And sometimes I’m the one who says or does things I shouldn’t. Both are wrong on my part. But here’s the point: At times our spouse is upset; however, it really isn’t about us. When that occurs it’s wise not to pick up the offense.

And even if it is about us, we still can make wise choices about the matter. Brant Hansen says, “You cut a huge percentage of your anger out by not being offended.” That’s so true. He goes on to say, “Being offended is tiring business. Letting things go gives you energy.” Again, both statements are true (it sure is for us). Please think and pray about it.

Steve and I both are more readily dropping offenses these days. It’s great! Of course, we still talk about issues that can cause problems in our relationship. That’s healthy! But we’re trying to nip those feelings of offense at the bud. This way they don’t grow and take root. It truly is freeing. Plus, it’s another step in growing in our Christian marital journey. Here’s an article that relates to some of what we have learned, and are learning:

If it’s possible, read the book, Unoffendable. It’s a hard concept to consider. The book explains it much better than we can. Below is a small look into this concept. You will see it in this You Tube interview. Now, once again, Brant does not talk much in this about marriage. But it is still a concept that we can, and should adapt within our marriages. We have, and we hope you will too. Please watch:

And then here’s another (shorter) video on this same issue. It’s a You Tube video that we encourage you to watch. It tells a bit more on how this fits in scripturally too. Please watch:

• UNOFFENDABLE: How Just One Change Can Make All of Life Better

Once we understand this principle and apply it, it’s freeing. If you can’t obtain the book, ask God to give you an added insight into this matter. We live in a fallen world. We deal and live with fallen people; and we are a fallen person. But we don’t have to let the anger and hurt live in our heads. Additionally, we can extend the grace we want to have when we do things we shouldn’t. We can forgive our spouse, as Christ has forgiven us.

“When we recognize our unsurprising fallenness and keep our eyes open for the glorious exceptions, we’re much less offendable. Why? It’s because that’s the thing about gratitude and anger: they can’t coexist. It’s one or the other. One drains the very life from you. The other fills your life with wonder. Choose wisely.” (Brant Hansen)

“It’s what you do with those offenses that determines the nature of your marriage, going forward.”

May we live accordingly:

“Finally, all of you, have unity of mind, sympathy, brotherly love, a tender heart, and a humble mind. Do not repay evil for evil or reviling for reviling, but on the contrary, bless, for to this you were called, that you may obtain a blessing. For whoever desires to love life and see good days, let him keep his tongue from evil and his lips from speaking deceit. Let him turn away from evil and do good. Let him seek peace and pursue it.” (1 Peter 3:8-11)

2 responses to “Are You Offended By Your Spouse?”