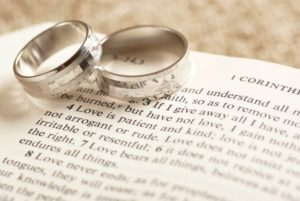 We’re asked the question often, “Should I get a divorce?” Our answer to them is, “that’s not for us to tell you. We’re told in the Bible that “what God has put together let no man tear apart.” That includes us. Instead, we encourage them to pray and to read the Bible, asking God to lead them. This is a personal decision between them and God —”a cord of three strands.“

With that in mind, here is a starting point for you. Carefully and prayerfully read the following scriptures that concern divorce:

Another thing you do: You flood the LORD’s altar with tears. You weep and wail because he no longer pays attention to your offerings or accept them with pleasure from your hands. You ask, “Why?” It is because the LORD is acting as the witness between you and the wife of your youth, because you have broken faith with her, though she is your partner, the wife of your marriage covenant. Has not the LORD made them one? In flesh and spirit they are his. And why one? Because he was seeking godly offspring.

So guard yourself in your spirit, and do not break faith with the wife of your youth. “I hate divorce,” says the LORD God of Israel, “and I hate a man’s covering himself [or his wife] with violence as well as with his garment,” says the LORD Almighty.

Some Pharisees came to him [Jesus] to test him. They asked, “Is it lawful for a man to divorce his wife for any and every reason?” “Haven’t you read,” he replied, “that at the beginning the Creator ‘made them male and female,’ and said, ‘For this reason a man will leave his father and mother and be united to his wife, and the two will become one flesh’? So they are no longer two, but one. Therefore what God has joined together, let man not separate.”

“Why then,” they asked, “did Moses command that a man give his wife a certificate of divorce and send her away?” Jesus replied, “Moses permitted you to divorce your wives because your hearts were hard. But it was not this way from the beginning. I tell you that anyone who divorces his wife, except for marital unfaithfulness, and marries another woman commits adultery.”

Some Pharisees came and tested him [Jesus] by asking, “Is it lawful for a man to divorce his wife?” “What did Moses command you?” he replied. They said, “Moses permitted a man to write a certificate of divorce and send her away.” “It was because your hearts were hard that Moses wrote you this law,” Jesus replied. “But at the beginning of creation God ‘made them male and female.’ ‘For this reason a man will leave his father and mother and be united to his wife, and the two will become one flesh.’ So they are no longer two, but one. Therefore what God has joined together, let man not separate.”

To the married I give this command (not I, but the Lord): A wife must not separate from her husband. But if she does, she must remain unmarried or else be reconciled to her husband. And a husband must not divorce his wife.

To the rest I say this (I, not the Lord): If any brother has a wife who is not a believer and she is willing to live with him, he must not divorce her. And if a woman has a husband who is not a believer and he is willing to live with her, she must not divorce him. For the unbelieving husband has been sanctified through his wife, and the unbelieving wife has been sanctified through her believing husband. Otherwise your children would be unclean, but as it is, they are holy.

Are you married? Do not seek a divorce.

101 responses to “SCRIPTURES ON DIVORCE”