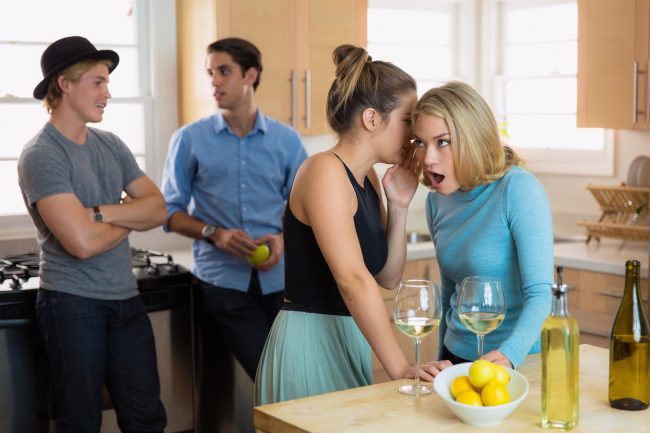 We’re not sure if you have observed what we have, but it appears that sin can be catchy. We often grab onto that, which we shouldn’t. Just like you can catch the flu or another affliction through germs that attach onto you from someone else, sin can be contagious too. Sometimes, when we’re around people that are sinning, maybe even a spouse, or we find something we shouldn’t view, or listen to; we can get caught up into sinning. As sin attempts to grab onto us, we have the choice to embrace it or leave it alone.

God tells us in the Bible to flee when we’re being tempted. This is actually for our own protection, and the protection of others that might be sinfully influenced, or be hurt by it, as well.

What does this have to do with marriage? Think about it. Have you ever been in a situation where your spouse is doing something he or she shouldn’t and you’re drawn into doing something wrong, as well?

Have you ever been in a decent mood, your spouse comes in and starts saying (or yelling) things he or she shouldn’t, and eventually you find yourself getting caught up in those same sinful actions? Sadly, we’ve been there. Or have you been with a group of friends where husband or wife bashing is going on and you join in—saying things about your spouse you shouldn’t?

Caught Up in Sin

I stopped participating, grabbed up the courage and nicely said something to the other gals that talking like this wasn’t a good thing to do, and walked away quietly, very convicted. I’ve been very aware of this behavior ever since and try not to get caught up in it anymore, and try to steer others away from doing this too. If they keep going on, I just find an exit in some way. There’s something about being in a group of people who are talking or doing something that makes it seem like it’s “okay” to join in because “everyone else is doing it.”

Everyone Else Can Be Wrong

Or maybe you’re on your computer, you come across (or go looking for) some suggestive images that aren’t your wife (or husband) and you allow your mind to go there, knowing it’s a sin. Someone else supplies the avenue, and you go down it. It’s alluring, but it’s wrong. Or maybe you’re “chatting” with someone who isn’t your spouse and the conversation starts to go in a direction that no married person should allow. Caught you!!! You let your guard down and WHAM! You start entertaining the enemy of our faith and break God’s heart all in one fell swoop.

They also say that divorce is catchy. It has been shown in studies, that when one person at work gets divorced, eventually other co-workers who are married entertain thoughts of getting a divorce, even when they hadn’t thought about it fully before. But because this friend seems to be doing okay, some spouses decide to take the same route. Resolving conflict is difficult, and sometimes it just seems easier to bale out, rather than toughing it out. Divorce can be catchy, just as sin can be catchy.

Letting Others Pull You Away

Or maybe you have friends that don’t honor your marriage, pulling you away from your spouse in unhealthy ways, tempting you to do what you shouldn’t. Maybe you’re giving your family more preference and time than it’s good to do. You may even be allowing them to say things about, or do things to your spouse that they shouldn’t, forgetting that now that you’re married, your spouse is supposed to be the one human being that God says you are to “cleave to” —putting his or her preferences and well-being above all others. You just got caught up in what you shouldn’t do.

In the book, When Sinners Say “I Do” Dave Harvey points out that:

“Your marriage is not a romance novel. Marriage is the union of two people who arrive toting the luggage of life. And that luggage always contains sin. Often it gets opened on the honeymoon… but the suitcases are always there, sometimes tripping their owners, sometimes popping open unexpectedly and emptying forgotten contents.”

When sin comes knocking or “pops” out in some way, it’s important to know what to do so we don’t get “caught” up in sin and spiritually fall —perhaps even taking our marriage down in the process. As John Piper says, “the most dangerous thing in the world is the sin of self-reliance and the stupor of worldliness.” It’s easy to get caught up in it. And for that reason it’s important to “be on the alert” as we’re told in the Bible. We can stumble, or head voluntarily into doing that, which is sinful. It’s important not to allow ourselves to believe the lie that because we hurt so badly, solutions to do that which we should not, are acceptable. They are not.

Obviously, we aren’t able to immediately physically “flee” from all temptation presented. It may be that we’re in a location where that makes it impossible (an employment, or a living situation with parents, or such). But in marriage we vow to invest in helping our spouse be the best he or she can be, in partnership. So, how do we avoid “catching” the sin they’re involved in? First off, we “stay on the alert” as we’re told in the Bible, knowing the enemy of our faith is trying to get us to fall.

Flee, Grit it Out, or Confront

We ARE sinners, married to a sinner (and many of us give birth to “sinnerlings” who also trip us up). Sometimes we remove ourselves from the situation; or we grit it out, praying for strength—NOT participating. Sometimes we need to lovingly (speaking the truth in love) confront the person tempting us –many times it’s our spouse. But here’s an important warning (from Dave Harvey) to remember:

“So often, couples can treat confrontation like a hand grenade—pop the pin, let it fly, and run for cover. But biblical reproof is not some kind of commando raid. It’s careful, committed, surgical care for the soul. A good surgeon is committed not only to the operation, but to post-operative care as well. God’s purpose for reproof is not to achieve a hassle-free marriage but to inspire repentance unto godliness. And repentance and change, takes time.

“When sinners say ‘I do,’ we must be committed to the entire process of helping each other grow in godliness through life.”

That means we need to go the extra mile to deal with sin without getting caught up into it, participating in it one way or another, as well.

Be on the Alert

When your spouse or someone else around you is sinning, be careful. Call upon God to show you how to flee from it, or deal with it. Sometimes we need to remove ourselves (physically or mentally) from that location. Other times, when we can, we need to confront the person who is doing what is wrong.

Be careful though, not to grab onto the “I’m better than you because you’re doing what you shouldn’t and I’m not” attitude. That in itself is sinful because it involves pride. It’s that “catchy” principle on the slide, sin leading to another type of sin.

Ask God to help you to make sure your attitude and actions come from pure motives when you confront.

Whatever it is that is happening, where you know the person (spouse) is doing something wrong, please be careful. Sin IS catchy. We can easily be drawn into participating in it if we aren’t on the alert. This is just one of those “heads up” Marriage Insights for you. We’re trying to make you aware so you are more careful in the future.

You may think you won’t fall, but many have thought the same thing. And yet, they have been “caught” and rush into doing that, which only fools would think they should do. If you only knew how many times we’ve heard the phrase, “I never thought this would happen, but… or “I never thought I was capable of doing this, but…” you would be amazed and saddened, as we are, and they are.

Please be aware that sin IS catchy. Be careful, guard your heart and mind.

If You ARE Caught

If you’re caught up in sin, please read the following linked blog from The Romantic Vineyard and apply:

May God bless us all in this mission of being on the alert.