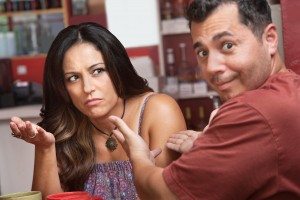 Have you ever picked up an attitude and used it in a way that has pounded away at your spouse, almost like swinging a hammer? And when you’re hammering away you don’t even care about the ways in which you hurt your spouse and others who witness it all. It’s called having a hammering attitude. We confess that we have done that to each other more than a few times. And as we think about it, we’re embarrassed. Yes, we were mad, upset, and frustrated. But that doesn’t excuse bad behavior.

From Galatians 5:19-20, we’re told, “The acts of sinful nature are obvious.” That includes, “hatred, discord, jealousy, fits of rage, selfish ambition, dissentions, factions… and the like.” OUCH!!!

I read the following written by Valorie Quesenberry, in a Today’s Christian Woman article titled, “A Hammer in My Hands.” I sure can relate (it also brings conviction). And please note, most of this could be turned around and applied to husbands. It’s possible that they are the ones using the hammer of discord.

Pounding in a Point:

“I have come to realize that my attitude as a wife is a powerful tool. It’s one that can create beauty or havoc. Proverbs 14:1 says, ‘The wise woman builds her house. But with her own hands the foolish one tears hers down‘ (NIV). To put this in building terms, every wife has a hammer in her hands. It’s her attitude toward her husband. And how she chooses to use it will have an impact on the type of home she has.

“A hammer can drive nails into boards, adding to the stability of a building. Plus it can remove nails that have been wrongly pounded in. When it’s used to fasten pieces tightly, a hammer can help in the process of raising the walls of a home, making it solid and secure.

“But a hammer can also be used to demolish a building. It can destroy what was once standing. It can repeatedly chip away at block walls. And it can be used to bludgeon and inflict pain.

“I confess that I’ve been guilty of using the hammer in negative ways. Sometimes, like a foolish woman, my attitude has been as brutal as a sledgehammer. And I’ve used it to clobber my husband —words, facial expressions, and body language, are all a reflection of attitude.

“Maybe you’ve been there too. It’s not always intentional. A disagreement goes south quickly or a simple irritation becomes an escalating issue. Or maybe over time a reluctance to forbear and forgive becomes resentment and finds expression in hurtful ways. And after the explosion, looking around at the debris, you feel tempted to drop the hammer for good, sign off on marriage.”

Sound familiar? I know I’ve been there. And sadly, earlier in our marriage, I would bring the “D” word out (divorce) and sling that around too thinking I was justified.

Oh, when I look back, I just shudder. What was I thinking? Actually, I should reword that to say, why didn’t I START thinking? What did I think would result from my threatening divorce? Did I think Steve would come running up to me begging me not to do it? Did I think that he would “straighten up and fly right” as I thought he needed to do? Yes, I did. How naïve!

All that did was make him angrier and more defensive and take our argument to a new level. It also chipped away at our trust and the solid foundation of our marriage. Wrong, so, so wrong!

If you’ve been giving into “stinking thinking,” hammering away at your spouse with a lousy attitude, hopefully you know better than that. Please don’t allow yourself to believe the lie that because you hurt so badly, or because you’re in a lousy mood, solutions to do that which you should not are acceptable. They aren’t.

One thing that has helped me through the years is to warn my husband (and our sons when they were younger and in the home) that I need some space and grace because I’m going through a tough time. I even wrote about it in the blog, Warning: Bad Mood in Progress.

When they heeded my warnings, I was able to keep it together MUCH better. When they didn’t, it was not a pretty scene!

So, this is one of those “thanks I needed that” reminders. Please do what you can to NOT be contentious.

As we’re told in the Bible:

“It is better to live in a corner of a roof, then in a house shared with a contentious woman.“ (Proverbs 21:9)

“It is better to live in a desert land, then with a contentious and vexing woman.“ (Proverbs 21:19)

“A constant dripping on a day of steady rain and a contentious woman are alike. He who would restrain her restrains the wind, and grasps oil with his right hand.“ (Proverbs 27:15)

“The woman of folly is boisterous. She is naïve, and knows nothing.“ (Proverbs 9:13)

“So is a beautiful woman who lacks discretion.“ (Proverbs 11:22)

Whether you’re a wife or a husband who is contentious, there’s nothing good about going around with a bad attitude. If you have a tendency to continue down that path, maybe you need a hammer… a chisel. You need God’s chisel used on you, such as the following video demonstrates: