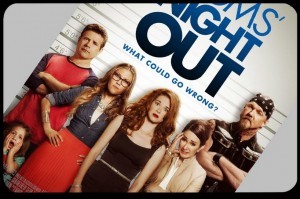 Last night my husband Steve and I went to a sneak preview of a new movie that’s coming out on Mother’s Day titled, “Mom’s Night Out.” It was a fun movie —one that made a lot of people laugh (including me at times), which is always refreshing.

There are a couple of things I was impressed about. One of them is that there were several men that went to see this movie (my husband included). I sure love and appreciate my husband all the more for this. He actually was even laughing more than I was. That sure warmed my heart. (And yes, I go to some of his movies too, with a good attitude and enjoy the time with my husband.)

Also, there was no husband bashing or wife bashing involved in this movie (yes, there were husband’s featured in this movie too, so it wasn’t just a “chick-flick”). That’s refreshing. I’m so tired of movies where there is a superiority complex going on where one spouse thinks that it elevates them to look better if they put down the other gender of spouses. That’s something I want no part of… I don’t appreciate it (and neither does the other gender).

But I want to talk for a few minutes on giving your spouse a bit of time away sometimes when he or she needs it. It should be a two-way street where the husband gets a “night out” or a morning out with some friends (good, marriage-honoring men) and the wife gets some time away with some (nice, marriage-friendly) friends.

It’s great for our spouses to be our best friend… mine is, without a doubt. I LOVE spending time with Steve. But there’s a part of me that sometimes needs to be with other female relatives and friends because my husband just doesn’t “get it” when it comes to some of our feminine needs and “girlfriend talk.” But that’s okay. I don’t understand his “guy friend” needs where attending a testosterone-rushing event and “guy talk” is needed. We’re pretty even on all of that. We’re just different. And different is okay… it’s just different.

I agree and believe with Dr James Dobson that it’s important to:

“Give each other breathing space. According to behavioral researcher, the healthiest marriages and those with the highest sexual voltage are those that ‘breathe’ —relationships that move from a time of closeness and tenderness to a more distant posture and then come together for another reunion as the cycle concludes. This is why it’s not always advantageous for a husband and wife to work together or to concentrate exclusively on one another in the absence of friends and colleagues outside the family. There’s something about the diversity of interests and activities by each that breathes life into a marriage.” (From the book, “Home with a Heart”)

Steve and I have learned through the years that it’s healthy to give each other little pockets of time where we spend it with other relatives and friends (of our own gender). Afterward, we come back refreshed in ways that are needed and we’re better spouses and parents because of it. We’re happy for each other to be able to “get away” for a bit of time. That’s why I’m all for “Mom’s Night Out” —the movie and the principle, just as I would be for a Dad’s night out IF it can be done in respectful, marriage-honoring ways.

We see some spouses who use it as a time to do that which they shouldn’t —that which hurts their marital partnership. This shouldn’t be. Why marry if you’re going to dishonor your spouse, your marriage, and especially God in this way? We hear about this continually here at Marriage Missions. It’s sad, so, so sad! No matter what’s going on in the marriage, it’s never acceptable to act out this way. Yes, have a fun time with friends when it’s appropriate, and with whom it’s appropriate, but don’t make it a spouse bashing, betraying time… keep it clean. Keep it fun and yet pure.

Try giving each other a little breathing space away from the responsibilities sometimes. You’ll find yourselves more refreshed to jump back in and face important matters in a renewed way. But don’t take unfair advantage of the opportunity (and choose wise timing to do so).

The best part of the movie, “A Mom’s Night Out” was the ending. My husband agreed. The wives and husbands came back together in a more appreciative, loving way. It was heart-warming. It’s good to see movies that present situations that way. That’s how it should be.

I’ll never forget a time away when our sons were just toddlers (4 and 2). I was asked to go to a weekend women’s retreat with a group of friends from church. Steve agreed that I needed this getaway and encouraged me to go. In reality, he had no idea what he was in for. But in the end, there was a whole lot of appreciating and love that happened!

I went away with my gal friends and had a GREAT time! What was even better was what happened when I came home. I entered the house and noticed things were a bit different, in more disarray, lets say, than when I’d left. As I passed by our son’s room I noticed that John’s crib was standing lop-sided with Steve’s neckties holding it together. I couldn’t wait to hear that story —very curious indeed.

When I entered the room where Steve and our sons were together, my husband came running, picked me up, and spun me around holding me as tight as he could. He kept saying, “I love you; I appreciate you… I’m so glad you’re home.” And glad he was! I guess he had his hands full being a full-time daddy, housekeeper, and such. A LOT had gone on in an entirely different way than he thought it would. He had never had our sons alone by himself for such a long stretch of time before and now he better understood the other side of our partnership. I sure knew that side because Steve went on a lot of business trips so our sons and I had a lot of prolonged time to go at it, without both of us working together.

But I was curious about the crib. Steve said that the morning before, he woke up to David and John crying and John’s crib collapsed. While Steve was sleeping, John had found a way to take a number of the bars out of his crib. How he managed to do this, I’ll never know. And most curious was how he managed to take a “number” of the bars out without his dad hearing the commotion. Certainly, a two year old wouldn’t be quiet when he did this and neither would his brother be quiet as he watched and cheered him on (and would eventually loudly tattle as more bars were being removed).

Needless to say, one of the first things we did was go out and purchase a “big boy’s bed” for that night’s sleep. Neckties holding a bed together would not be this mother’s way to approach our son’s sleeping arrangement.

But I have to say, my husband never looked at me the same way after that weekend. He was oh, so much more appreciative of all I did to manage our household. That was definitely a GOOD thing (although I tried not get too puffed up about it, even though it was difficult sometimes). I had a lovely time away with my friends and my God, and I came home to happier husband and kids (they apparently weren’t so keen on the way things went either with mommy being gone). Ahhhhh! Sweet memories!

So yes, a Mom’s Night Out is good —the movie and the real event (or a morning or a pocket of time away). And so is a Dad’s brief time away a good thing. But make it respectful, and as timely as it is possible. The mission is to HELP the marriage in the long run. We’re to honor our marriage commitments as husband and wives whether we’re together or away from each other for whatever reason.

By the way, Steve asked that I encourage you to go to the movie as a couple. There is stuff there for guys, as well as gals. But if not, if your husband just won’t do it, we recommend that wives go. It’s a fun movie. Mother’s Day is when it’s coming out… try it. We believe you’ll like it.

This blog was written by Cindy Wright of Marriage Missions International.