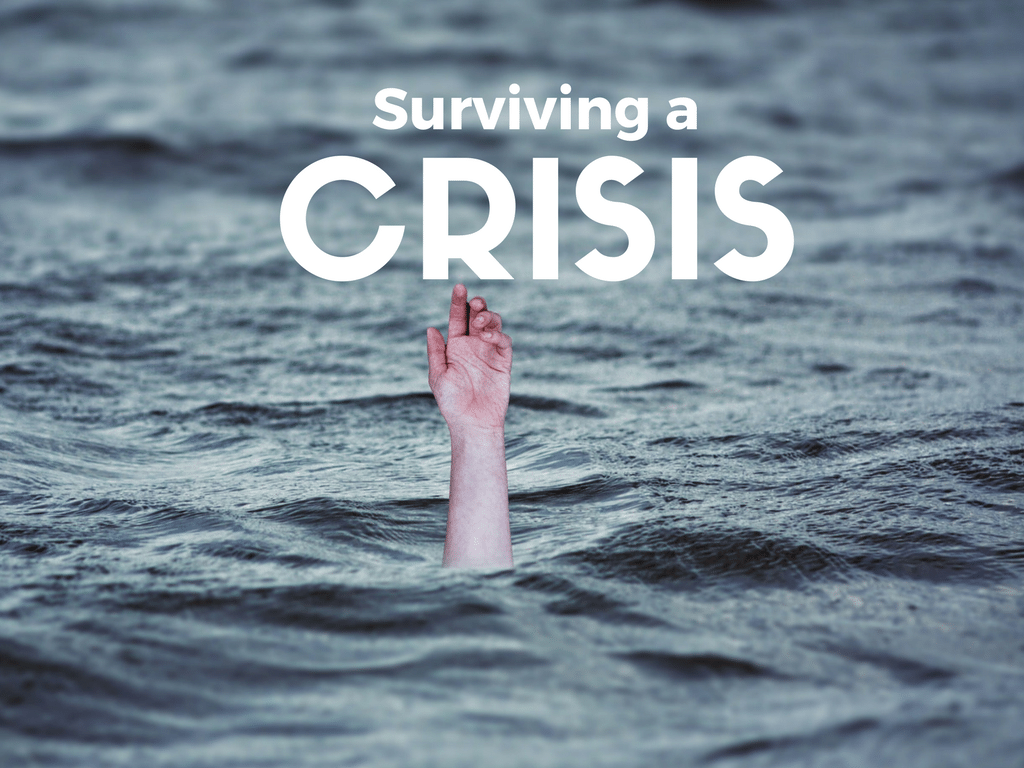 Crisis is a part of married life, no matter how much we wish it weren’t. And when a husband and wife have been together [for a long time] it’s inevitable that they’ve had their share of tough times. Such crisis —for example, health problems, financial trials, struggles with a child —can eat away at the foundation of any marriage. Sadly, more and more these days the result is a couple just going through the motions of married life. Or they may even divorce.

It doesn’t have to be that way, however. While crisis are unavoidable, marital collapse is not. By pulling together and continuing to honor each other —and especially leaning on God for wisdom comfort, strength, and provision —trials can be endured with the relationship intact. In fact, the marriage can do more than just survive. It can come out of the experience ever more solid, and secure than it was before. (Gary Smalley)

The Bible tells us that God “sends rain on the righteous and the unrighteous” (Matthew 5:45). And for that reason, we should ALL expect the “storms” of life to hit our marriages. So how do we prepare for a crisis so the foundation of our marriage doesn’t weaken and crumble?

Please prayerfully read a portion of what Donald R. Harvey has to say on this issue in an article titled, Bonds of Steel: Strengthening Your Marriage to Survive Anything. It’s an article, which was featured several years ago in Marriage Partnership Magazine. This article is now housed on the Today’s Christian Woman web site. If you go there, you can read this article in its entirety, along with other helpful articles such as this, which we encourage you to visit.

But for now, here’s a portion of what Donald Harvey writes on the issue of surviving a crisis:

“Every couple face things they’d prefer to avoid —job losses, severe illnesses, financial reversals, deaths of close family members and many other such events. These storms of life place immense stress on us. And they also test our marriages.

“When crisis strikes, some couples not only weather the storm, they emerge stronger and more united than before. Others struggle through the pain. And some marriages are destroyed by the crisis. So what makes the difference?

“It mostly comes down to what spouses do during the crisis itself. Do they give comfort and support to each other? Or do they withdraw emotionally or cast blame? Do they allow friends or family members to extend support? Or do they isolate themselves from outside help? Do they cling to a spiritual life? Or do they rely, instead, on “their own understanding” and abandon their faith?

“How you react during a crisis is important for the survival of your marriage. But the real battle is won or lost before the crisis occurs.

Donald R. Harvey goes on, further in the article, to say that marriage that survive share at least three characteristics. He goes on to share them:

“First, the couples are committed to marriage as a sacred institution.

Their commitment brings stability and provides staying power even during the most severe setbacks. Every marriage needs this resilience. But true survival requires more than simply bedrock commitment to an institution. If this is the only characteristic working in a marriage’s favor, the relationship can easily become lifeless and devoid of emotion.

“Second, survivors are committed to marriage as a relationship.

I have friends whose daughter was severely depressed, even suicidal. ‘We felt so helpless,’ John told me. ‘When things were at their darkest, my wife Pam and I found ourselves holding each other tight. Through tears, I told her things may get a lot worse for us. But we’ll survive even if it does.’ John was telling Pam he loved her, no matter what might happen. He was committed to more than the institution of marriage. He was committed to his wife Pam.

“For more than 20 years, John and Pam practiced being sensitive to one another’s needs. They had guarded their relationship against time pressures and striving for material success. And they had practiced mutuality —giving and receiving in roughly equal measure over the years. They shared a goal of looking for and doing whatever was in the best interest of their relationship, even if it meant sacrificing some personal comfort. John and Pam survived the pain of their daughter’s depression. And their marriage was made even stronger because of it.

“The third characteristic that enables couples to weather the big storms of life: vital faith and commitment to God.

Vital faith appreciates ‘the big picture.’ Life doesn’t operate according to our agenda. Pain comes to everyone. And we learn some of the greatest truths from things we wouldn’t choose for ourselves. God uses personal experiences to develop our ability to deal with the crises of life. By learning to trust him in the little storms, we’re prepared to trust him in the big ones.

“Married Christians have to guard against ‘Teflon mentality.’ This is an expectation that pain, stress, and hardship can’t really touch us but will magically slide off. It’s true that Christians aren’t of the world. But we’re definitely in it. We do feel pain and stress. But we don’t have to be overwhelmed by them.”

The truth of what Donald Harvey wrote is profound. Please prayerfully consider what he wrote, plus what we offer below.

If You are in Crisis

To help you survive and to be on the “winning” side of the battles you’re encountering, please take advantage of what we offer here on the Marriage Missions web site. Below are a few additional articles you can prayerfully glean through. Please look to see if God has something there that you can use and/or adapt for your situation, as God shows you:

• A MARRIAGE IN CRISIS: Doing What It Takes to Save It

• LEAVING MARRIAGE BECAUSE GOD WANTS ME TO BE HAPPY

There are a lot more if you look through the topics we have listed for your convenience. We have additional articles, testimonies, blogs, and videos posted on this web site. Plus, there are Facebook postings and Twitters you can take advantage of. We also give a number of Recommended Resources. And most importantly, there is the Prayer Wall on the Home Page. It is available to post marriage prayer requests, or your prayers to God concerning your marriage. Please know that God cares and so do we.