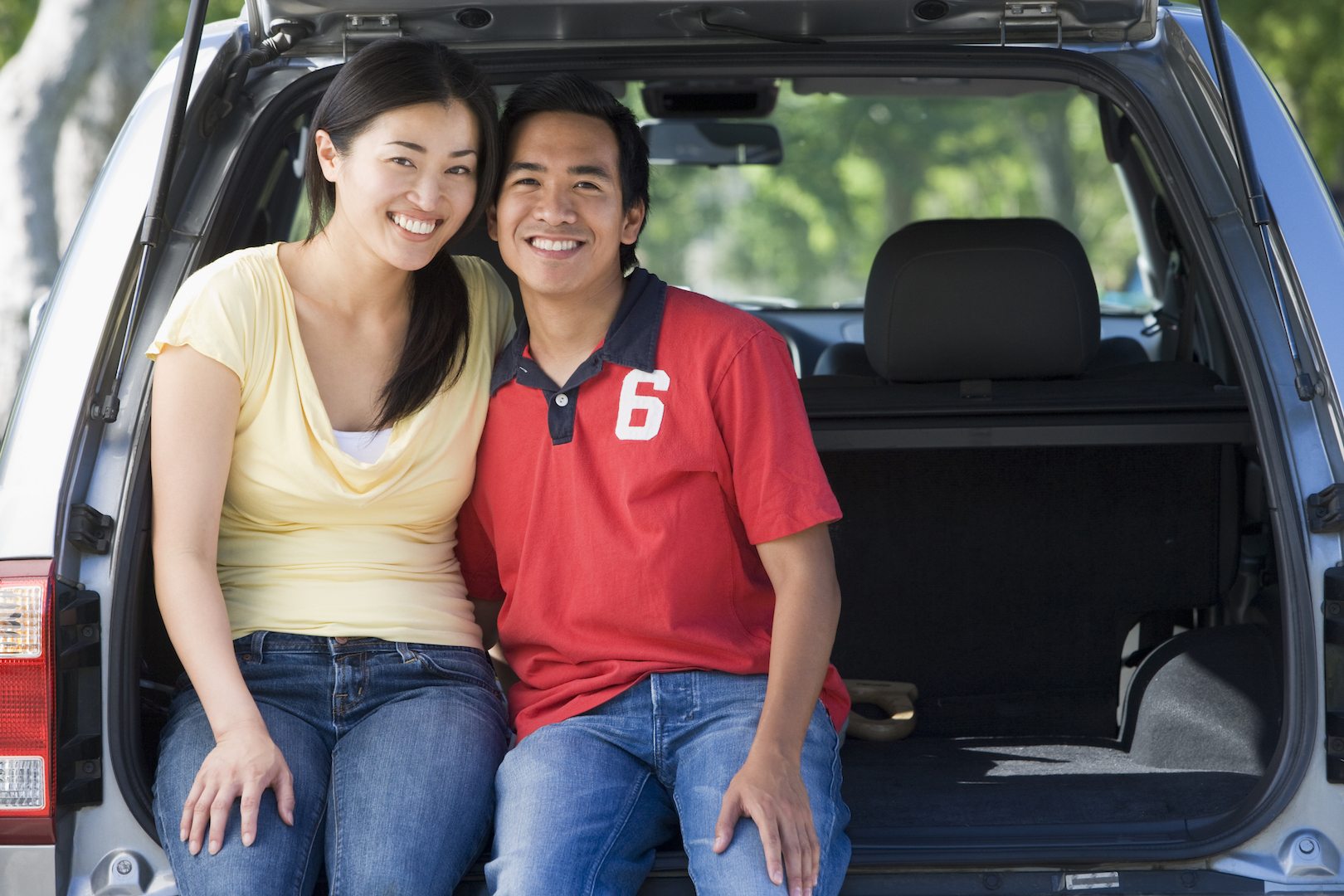 Editors Note: The following is a short excerpt from the book, “Passages of Marriage.” In it the authors discuss the five growth stages of marriage, called passages. The intention of sharing this first passage is to help you better to understand the stage you are in and hopefully help you to work to make your passage smoother when two independent people cleave together:

Geometry buffs understand why a stool sits best on three legs; three points define a plane. They also define a stable marriage. A four-legged stool will wobble if all four legs aren’t exactly even and sitting on a flat surface. A one- or two-legged stool cannot stand alone. But you can perch a three-legged stool on uneven ground and you can sit securely. A three-legged stool adapts solidly to any situation.

Every marriage exists as a three-legged stool. One leg is the husband; another is the wife. Their third leg changes through time; it might be the kids, or the job, or buying and furnishing a home, the kids leave home, retirement, etc…

Right in the beginning, as in the fourth passage of marriage, the stool is two-legged, and therefore unstable. The happy newlyweds are certain that in each other their lives are complete. They don’t think they need a third leg. Their lives don’t have room for one. As a result, the marriage bond at first is extremely fragile and easily hurt, as are the marriage partners.

The First Task—Mold Into One Family:

The first task newlyweds must accomplish if they’re to complete the first passage is to mold two absolutely different, independent persons into one unit. That won’t come easily. Take two headstrong individuals and forge them into a unit without sacrificing their individuality. What a formidable task! To get through the passage of young love with flying colors, you, as well as every other newlywed, have to master this task. Several things help in completing it.

On the Plus Side… A powerful tool comes built into this task of young love: excitement and enthusiasm —raw, exuberant energy.

On the Other Hand… One thing seriously hinders the move to unity: the possibility of breakage. Regardless of what the couple thinks (or imagines), their intimacy in the beginning is superficial. True intimacy grows only as a couple get to know each other better. Persons in a new relationship haven’t had enough chronological time to do that in depth. This is true no matter what the actual age of the persons involved. Teenagers and 70 year olds suffer equally. They feel compelled to walk on eggs, as it were, when dealing with each other. “Will this upset her?” “How will I tell him about this?”

A new couple, regardless of chronological age, has simply not logged enough time in harness to develop deep intimacy. Often a new couple inadvertently strain their fragile intimacy by loading it with burdens it cannot carry. “This is the intimate relationship that will solve all my other relationship problems from the past. I will finally receive what I need.” Friction with parents, failed prior relationships, perhaps even failed marriage—all melt away in the brilliant heat of this new and encompassing love.

Putting Original Family Patterns Behind… Pulling up roots exists in another dimension. The bride and groom have successfully left home. They’re on their own. But the home has not left them. The old patterns from home color nearly everything in the new marriage. Do you open gifts on christmas Eve or Christmas morning? Do you make your bed immediately upon rising or when you go through the house tidying up? Which is right? The way you did it when you were growing up is right, of course. An other way, though not exactly wrong, isn’t right either. Obvious examples such as these seem overly simplistic, but far more subtle “rights” and “not rights” color our day-to-day living. What’s more damaging, they color a mate’s perception of the spouse.

The Second Task—Overcome the Tendency to Jockey for Control:

The second task is one which will resurface off and on throughout all the passages of marriage. Each spouse will ask, “Who’s in control here?” as different situations arise, from the choice of a restaurant for a Friday night date to the purchase of a new home. The source of conflict will change, as will the couple’s methods of responding to it, but conflict itself is present in all relationships.

Conflict is inevitable, no matter what the ages or backgrounds. The new couple aren’t far enough into their relationship to know that conflict is nothing more than a normal part of marriage. How the couple deal with that conflict, however, can make or break the union. [Marriage Missions Editor’s note: for help in this area of your marriage look in the “Communications” section of this web site for tools to help you work through conflicts in less damaging ways.]

Also, expectations transfer from courtship into marriage and so does every unresolved issue. Conflicts the couple thought would disappear, little things in their engagement, blossom into big things in marriage.

The Third Task—Build a Sexual Union:

Unlike other biological needs—food, shelter, water—the sex drive is profoundly influenced by factors outside biology. Physical factors such as drugs or alcohol, fatigue, stress, and physical disabilities alter sexual response. But the most active sex organ, and the least appreciated, is the brain. It does its thing largely beyond the conscious level. Personal problems and distractions, fear, misconceptions about sex (“hang-ups”) and the emotional states of both parties are subconscious mental factors.

In the area of sexuality, as in the areas of many decisions within the new family, time capsules from your childhood family may begin to affect your sexual intimacy. We have never yet seen an exception to the rule that a woman (or man) abused in childhood will suffer some degree of sexual dysfunction in adulthood. Problems within the person include damage done by sexual abuse and other traumatic sexual experiences. Such damage almost always affects marital sex. In these cases professional counseling is almost always necessary We also recommend reading the book, The Wounded Heart… Hope for Adjust Victims of Sexual Abuse by Dr Dan Allendar.

We suggest that couples consider another essential area of growth in their marriage, spiritual growth, which unites their marriage to the purposes and values of the God of the universe, who first ordained marriage.

Persons completing this first passage must trust that God exists beyond their family of origin. “Nonsense!” you fume. “Everyone knows that!” Sure they do, intellectually. but in childhood the heart has other ideas, and those ideas must be put away. The heart and head are often miles apart.

The newly married’s cannot know God as profoundly as can older people, but they can separate Him from the past and bring Him into the present and future of their new life together. Prayer to that end avails much. So does study and the inner examination of values. The new attitude toward God is an individual walk, of course, but do it also as a couple. Study together. Pray together. Find fellowship together with believers of like mind. Explore God and His claims together. Identify God with your new family in every area of your spiritual life.

ANALYSIS: Have We Completed This First Passage?

If your marriage is old enough to have done so, how well has it survived this First Passage? Is the passage completed? Check the statements below that apply to you. This is the type of inventory we make as we determine if a couple has completed the First Passage. We invite you to make your own assessment and make any adjustments that seem possible.

1. ____ I am willing to bend on issues that have popped up regarding the nitty-gritty of married life: who balances the checkbook, who does what cooking, who scrubs the toilet. As evidence of this, I can cite the following example:

2. ____ We have reached agreement, or at least an armistice, on some major control issues. Two specific instances I can point to that demonstrate progress are:

3. ____ I am willing to step out of my old family into this new one. Evidence that I am maturing into the new life as a marriage partner, or have done so, is:

4. ____ I have not come as far out of my family as I would like to, as illustrated by this instance:

“Three things I can do to reduce family ties are:

5. ____ I am willing to open up into intimacy. One recent instance in which I let myself be vulnerable to my make is:

6. ____ “I can honestly claim that our sex life is open and honest and enjoyable for both of us, more so than in the beginning. A way in which it is improving is:

7. ____ “Okay. So I am willing to pursue romance with my spouse any way. Three instances lately in which my partner and I made a romantic gesture or pursued some romantic fantasy are:

This article came from the book, “Passages of Marriage” by Dr Frank and Mary Alice Minirth, Dr Brian and Dr Deborah Newman, and Dr Robert and Susan Hemfelt. Unfortunately, this book is no longer being printed. This is sad because we were barely able to scratch the surface about what this book says to newlyweds (and beyond) about what it takes to get through stages of life together. This book dealt with five growth stages (which they call “passages”) to take your marriage to greater intimacy and fulfillment.

3 responses to “Can Two Independent People Become One Unit?”