Above all else, guard your heart, for it affects everything you do. (Proverbs 4:23) 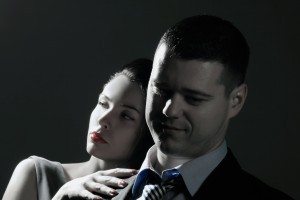 Kate found out her husband was having an affair the same week he asked her for a divorce —she didn’t see it coming. She told me, “My ‘gut’ was telling me that things weren’t quite right, but Bob had convinced me that I was just paranoid and insecure. I had no idea he was such a good liar. He talked me out of my suspicions.” So, what ARE some of the warning signs of infidelity?

I asked her, “Could you make a list of his unusual behaviors? New actions that weren’t necessarily bad  just odd. But now, looking back, you see them as signs that he was having an affair?”

1. About six months ago, he started working longer hours and having more “client dinners.”

2. When he was home, he would seem restless and often claim he had “work” to do, so he spent a lot of time in the den —with the door closed.

3. He started some new patterns that I thought were wonderful. He took the dog for long walks, and offered to run errands for me in the evenings. If I commented that I wished I had some cookies for the kids’ lunches, he’d say, “I’ll be happy to go to the store for you.” I found out later that he’d call his mistress on his cell phone while he was walking or running errands.

4. He gave me a goofy, silly card for my birthday instead of his usual romantic, sentimental one, and he only signed his name —not Love, Bob.

5. Our sex life lost its sizzle. On the rare occasions when we did make love, it felt awkwardly cold – just a physical act, not an emotional connection. I think he may have felt as if he was being unfaithful to his girlfriend by sleeping with me.

6. He started referring to a person at work named Pierce. He would tell me how funny and talented Pierce was. That was his mistress’s last name!

7. He started to skip desserts and be very careful about what he ate —he lost weight and started exercising.

8. He dyed his hair —to cover the gray. “She” is twelve years younger than he is.

9. He seemed more short-tempered. Things that didn’t usually bother him suddenly did. He was especially impatient with the children.

10. After I saw the way he reacted to “her” at a company party, I asked him if there was something between them, and he lied to my face. Looking back, I know he lied to me about credit card and cell phone bills, and that most of the new clients he’d been taking to dinner were not clients at all.

Kate summed it all up:

“I wish I’d been more alert. I just didn’t put all the pieces together until it was too late.”

When Secret Service agents guard the President, they continually scan the crowd. They’re looking for unusual movements or odd behaviors that may be an indication of danger. The agents have studied how innocent people usually behave, so they can spot a person who’s acting “guilty.” We can apply some of these lessons to guarding our marriages.

These are some of the warming signs of Infidelity:

2. Wearing a different style of clothes;

5. Pulling away from church and extended family;

7. Comparing his or her spouse to other people;

9. Taking off his or her wedding ring.

10. Becoming secretive or defensive about phone calls and emails

You don’t need to be paranoid or to see things that aren’t there. I don’t recommend that you spy on your spouse —but if you need to, feel free. It would be wise, however, to be on guard.

Affairs begin in many ways and for many reasons, so we must be always on guard for the slightest hint of temptation. Because hints turn into flirtations, flirtations turn into attractions, attractions turn into affairs, and affairs turn into disasters. 1 Corinthians 10:13 says that God will always provide a way of escape, but we have to make a decision to run toward the door.

When you’re guarding your marriage, you’re not guarding just your spouse, but guarding yourself too. I rationalized my way into a boatload of trouble because I thought; “The rules don’t apply to me. I’ve been to Bible College, I’m smart, I have self-control, and I can stop before it gets too far.” All lies!

My affair began at work, so I’m an expert on workplace temptation. Once, the most common type of office infidelity was between male bosses and females who were lower-ranking employees, but that’s changed in the last ten years. With more and more women working, the most common office affair is between coworkers. The man I had my affair with (Jake) was not my boss; we were both sales reps —equals

My relationship with Jake started innocently. I noticed that we laughed at the same things, and he noticed that we liked similar music, so we started to sit together at lunch. We were just friends —until we weren’t.

I remember the first time we went out of the friendship zone and into the danger zone. We were sitting next to each other at a sales meeting when his leg brushed up against mine. I felt a spark at the contact point and was a bit disappointed when he pulled away. A few minutes later, he shifted slightly in his chair and his leg, from knee to thigh, pressed gently against mine. I liked it, and I didn’t pull away.

I should have. But because I didn’t, I sent him a signal that I was unguarded. We both began to look for excuses to be together. If I’d not responded to his flirtations, I would have avoided the biggest regret of my life.

Be on the Guard

Coworkers sometimes work on projects or solve problems together, and the resulting closeness can build teamwork —but it can also build a feeling of intimacy. If you feel an attraction to someone in your office, consider a transfer to a different department, a different position, or maybe you should quit. No job is more valuable than your marriage. I knew that I could not continue to work with Jake without being tempted, so I quit my job the same day I confessed my affair to my husband.

Be honest with yourself. If you’re dressing to please someone else or lingering in the parking lot hoping that person will ask you to lunch, stop now, before you’ve gone too far. If you’re in doubt as to what conduct is inappropriate, ask yourself, “Would I do this in front of my spouse?” And if you’re still not sure, ask yourself, ” Would I do it in front of the Lord?” (You are, you know.) Here’s a simple rule to keep you on the straight and narrow: If you’d have to hide it or lie about it —don’t do it!

Be Honest About Weaknesses

The key to growing effective guarding hedges is to be honest about your weaknesses, both as individuals and as a couple. Set up distinct boundaries and enforce them. If your spouse reminds you of the rules, don’t be defensive or point out your mate’s faults; accept his or her correction because it’s for the greater good of the marriage. Some of the most difficult phrases to say —you’re right and I’m sorry —can save your marriage —and your love.

When Secret Service agents guard the President, they regard the President’s life as more important than their own individual lives. Guard your marriages in the same way. You may be required to sacrifice part of your individual life —hobbies, profession, TV time, computer time, sports activities —to strengthen your marriage. If you’re both willing to make your marriage a priority, however, and guard it from internal and external dangers, your home will be a safe haven.

“It is God’s will that you should be holy; that you should avoid sexual immorality; that each of you should learn to control his own body in a way that is holy and honorable, not in passionate lust like those who do not know God.”

The above article was adapted from the book, Avoiding the Greener Grass Syndrome: How to Grow Affair Proof Hedges Around Your Marriage

, written by Nancy Anderson, published by Kregel Publications.  This book was written by a woman who strayed to the other side of the marital fence —and returned to find forgiveness and restoration. Based on the principle that the grass is always greener where it’s watered, this book focuses on how to grow a beautiful marriage in your own backyard by establishing six protective “hedges” around it.

Author Nancy Anderson and her husband Ron speak nationally to couples’ groups of all denominations. They share their message of hope and restoration with tenderness and humor. If you live in the United States and would like for them to speak with your group please contact them at www.RonAndNancyAnderson.com. You may also want to visit their blog at www.joyfulmarriage.blogspot.com.

58 responses to “The Warning Signs of Infidelity”