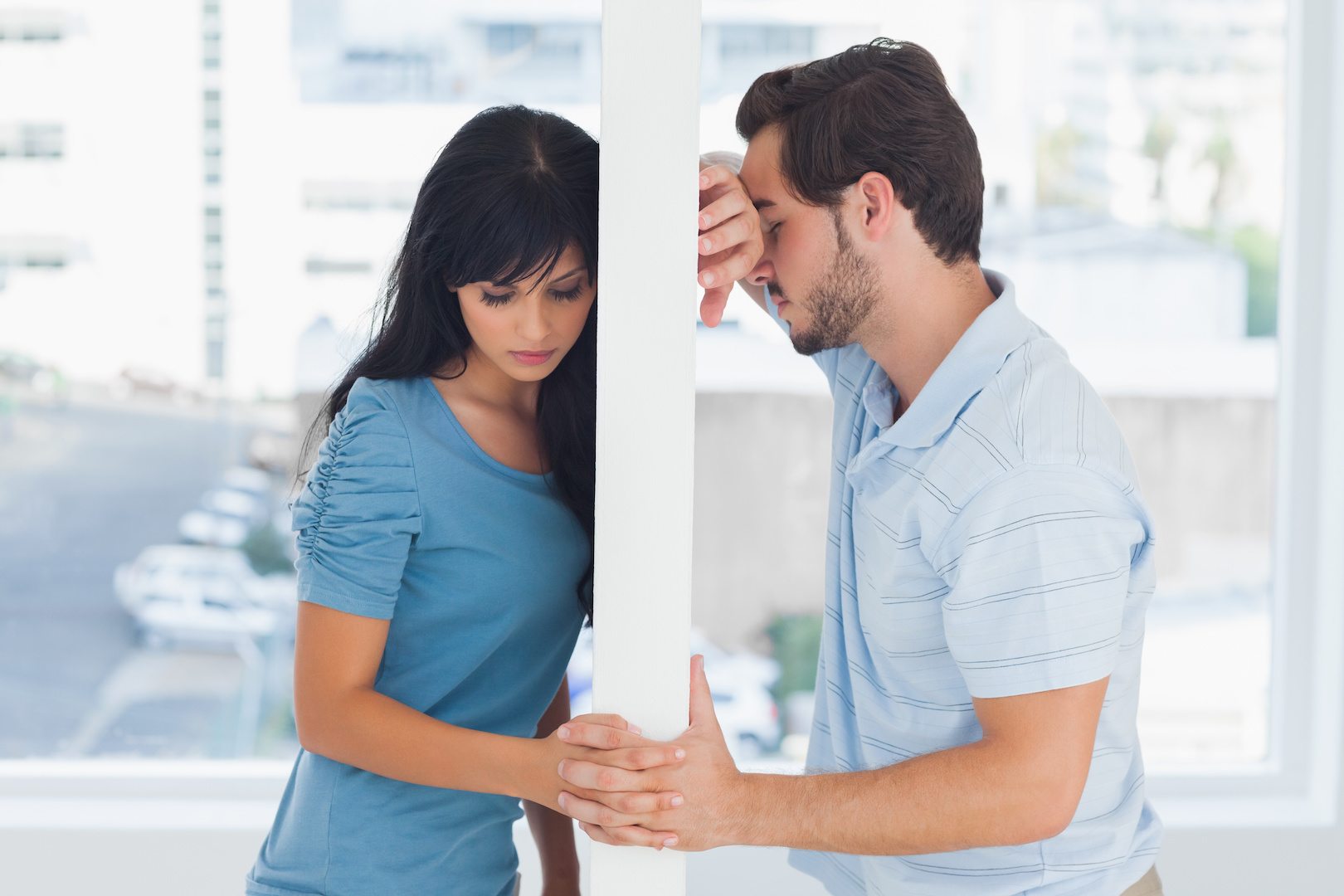 Do you have disturbing issues that are causing divisions between you and your spouse? These issues or grievances are like relationship walls that are building up and are separating the two of you. If so, it’s important to:

“Deal with grievances as they arise. Don’t stack them on top of one another or let them fester inside until they turn to hostility. Anger is always a secondary emotion. If spouses back up to what preceded it, they will often find hurt. If they reveal the hurt, they’ll weaken the walls that separate them.” (Bill Hybels)

There are so many circumstances that can cause walls of conflict to build up and separate us as wives and husbands. But the question is—what do we do when communication breaks down and hostility rises up to drive a wedge between us? If we let them fester, they will take us to a place where it’s more difficult to deal with them.

In light of this issue, we’d like to share a story to bring insight into what we’re to do in just such a circumstance. It’s titled: What Do We Build? Unfortunately we don’t know who wrote it so we can’t give them proper credit, but here’s how the story goes:

What Do We Build?

“Once, there were two brothers who lived on adjoining farms who fell into conflict. It was the first serious rift they’d had in 40 years of farming side-by-side. They used to share machinery and trade labor, and goods as each of them needed, without a single hitch. But then the long collaboration fell apart. It began with a small misunderstanding and eventually grew into a major difference until it finally exploded into an ugly exchange of bitter words, which was followed by weeks of silence.

“One morning there was a knock on John’s door. He opened it to find a man with a carpenter’s toolbox. ‘I’m looking for a few days’ work’ he said. Would you happen to have anything around here that I could help you with?’

“‘Yes,’ said the older brother. ‘I do have a job for you. Look across the creek at that farm. That’s my neighbor. In fact, it’s my younger brother’s place! Last week there was a meadow between us. He recently took his bulldozer to the river levee and now there’s a creek between us. He may have done this to spite me, but I’m going to do him one better. See that pile of lumber over there by the barn? I want you to build me a fence —an 8-foot fence —so I won’t have to see my brother’s farm or his face anymore.’

“The carpenter said, ‘I think I understand the situation. Show me where you have some nails and a post-hole digger and I’ll be able to do a job that will please you.’ The older brother had to go to town, so he helped the carpenter get the materials ready and then he was off for the day.

“The carpenter worked hard all that day measuring, sawing and nailing. About sunset when the farmer returned, the carpenter had just finished his job. The farmer’s eyes opened wide, and his jaw dropped at what he saw. There wasn’t a fence there at all. It was a bridge —a bridge that stretched from one side of the creek to the other! It was beautifully built with handrails and all!

“He then saw the neighbor —his younger brother, coming toward them, with his hand outstretched. ‘You’re really remarkable —to build this bridge after all I’ve said and done.’

“The two brothers stood at each end of the bridge, and then walked toward each other meeting in the middle, taking each other’s hand. They then turned to see the carpenter hoist his toolbox onto his shoulder. The older brother yelled, ‘No, wait! Stay for a few days. I have a lot of other projects for you to do.’ ‘I’d love to stay on,’ the carpenter said, ‘but I have a lot more bridges to build.’”

That carpenter had a peace plan. It was to weaken and tear down the walls that separate. And then he found a way to build relationship bridges to open up communication again. This is the same plan we should grab onto when we have grievances against each other as husbands and wives. We shouldn’t let them pile up. We totally agree with something that Dr Sharon Hart Morris said:

That’s what Steve and I have learned. Grievances against each other pile up, roll around in our brains, and often become tainted by our own perspectives. And the longer they’re there, the more damage they can do to our marital relationship. We need to get them out in the open, and dealt with in as short of a time as it is reasonable.

That’s why we wrote an article on keeping short accounts on relationship issues that cause division between you. We tell a bit of our own experience on not allowing grievances to pile up. We encourage you to read:

“Most problems start with hurt. After the hurt mulls around in our mind for a while, it becomes infected. (You can end up being angry at ‘the insensitive louse’ that only cares about what they do.) That’s why it’s important to plan peace talks as soon as possible, before hurt turns to anger. …Revealing hurt can build bridges of understanding and compassion. But venting hostility blows up bridges, because people are repelled by angry assaults.” (Bill Hybels)

Are you one who blows up bridges in your family? Or are you a bridge builder—taking seriously the message of reconciliation that the Bible talks about? We need to keep in mind that:

“We’re Christ’s representatives. God uses us to persuade men and women to drop their differences and enter into God’s work of making things right between them.“ (2 Corinthians 5:19 – The Message)

If you are experiencing distance between you and your spouse you may find the following Focus on the Family insightful to read:

• FIGHT FOR YOUR MARRIAGE WHEN YOUR SPOUSE IS EMOTIONALLY DISTANT

Please look for ways to build relationship bridges, rather than separating walls that cause darkness to permeate our relationship. Keep in mind that we’re told in Matthew 5:14-16:

“You are the light of the world. A city on a hill cannot be hidden. Neither do people light a lamp and put it under a bowl. Instead they put it on its stand. And it gives light to everyone in the house. In the same way, let your light shine before men, that they may see your good deeds and praise your Father in heaven.”

Allowing His Light to Shine to Weaken Relationship Walls

It’s our prayer that we’ll take this commissioning to heart to be Christ’s representatives. We pray we will allow His light to shine, as His ambassadors wherever we are—especially within our homes.

“Watch what God does and then you do it, like children who learn proper behavior from their parents. Mostly what God does is love you. Keep company with Him and learn a life of love. Observe how Christ loved us. His love was not cautious but extravagant. He didn’t love in order to get something from us but to give everything of himself to us. Love like that.“ (Ephesians 5:1-2 – The Message)

Lastly, as Christ’s ambassadors, may we continually build relationship bridges.