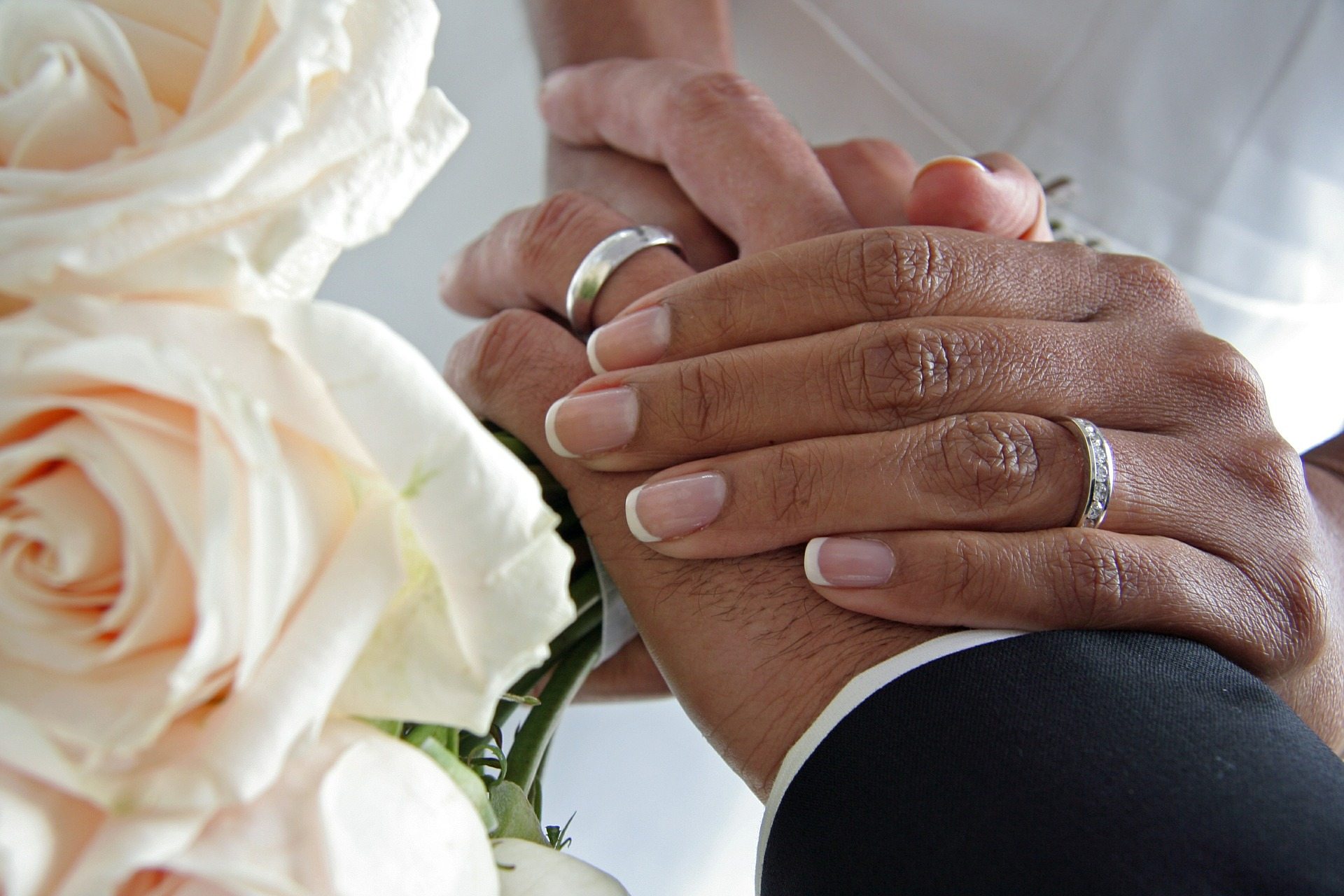 I love officiating formal church weddings. It’s a privilege to be a part of the ceremony when wedding vows are exchanged. I especially look forward to that precise moment when the bride first steps into view. I relish the exquisite sensations of those extraordinary seconds. Then I watch her raise her eyes from her bouquet to his face. And without turning to see his response, I know precisely when their eyes meet. I hear his sharp intake of breath and feel the bridesmaids’ stirring and murmuring around me.

Everything changes, becomes more vivid. It’s as if by her coming she has brought a different dimension of life to us all. My breathing brings more clearly the cacophony of fragrances of flowers, perfumes, and fear. I savor the subtly conflicting tastes of anxiety and anticipation. Only when the entire gathering sweeps to their feet for the bride’s triumphal entry do I clear my palate and settle into to my mission. Oh, yes, I do love to officiate at formal church weddings.

It’s just nearly everything that comes with it that I can’t stand. Why? Because I feel that most people just don’t “get it” when it comes to what a wedding is supposed to be all about.

I remember when I was a young, wet-behind-the-ears minister in the early 1970s. The mother of the groom-to-be was dominating a meeting about the upcoming nuptials. She fought her impending in-laws over every point of the coming wedding.

Unfortunately for her, her son’s fiancé was a member of the church I ministered for. So were her parents and grandparents. That meant that the wedding was to be held in our modest facilities, which were “across the tracks.” It was several blocks over from the magnificent structure of her church, the oldest and most prestigious in town. Not only were we a small and poorly funded church, we weren’t a highly liturgical church like hers. As far as I could tell, we offended her in every aspect of her religiosity.

Three times that day she pitched what we in the South call conniption fits. The first came when she toured our tiny reception hall and learned that our total food preparation equipment consisted of one coffee percolator. It was one that we never turned on the heat down there until just before it was needed. She shouldn’t be concerned about whether we would remember to turn it on for the wedding because it made no noticeable difference anyway. It was always freezing in there.

The second occurred when she discovered that not only did I not customarily wear a robe for marriage ceremonies, but I didn’t even own one. I was pretty sure I’d raise some eyebrows in our little country church if I were to buy one.

The third came when she requested to see our church’s “official marriage vows.”

“We don’t have any.” I replied, smiling as best I could.

“You what?” It appeared to be more than she could take. “Every church has an official set of marriage vows. I’m sure that if I were to call my pastor’s secretary, she could lay her hands on it in a matter of seconds.”

“Our church doesn’t have an official set of marriage vows.”

“Stop it!” she screeched as she jerked her head toward me, eyes bulging. The sudden move must have somehow unanchored her little white pillbox hat. It slid forward and tilted toward her nose. With that little white hat perched at such a perfect angle, and the “smoke” exploding from her breath as she bellowed away in our eternally cold reception hall, she reminded me of Popeye. But she was not as handsome. She continued, “What kind of church is this? How can you possibly stay within the law if you don’t have specific, approved marriage vows?”

Charge it to my inexperience, immaturity, or the weakness of inherent flesh. I’d had enough.

“I’ll let you in on a secret. Until I officiated at my first wedding, I thought like you. Maybe I was even more naïve. I thought maybe there was this one vow that we all had to work from or something like that. Not so.

“So, while our church doesn’t have official vows, I will be glad to show the ones I typically use. Or maybe the young couple here would like me to use the vows your pastor normally uses? My preference is that they write their own and read them to each other during the wedding. That’s the most touching way.

“It’s also the only way that they or anyone else in that room will remember what the vows were. Three minutes after I pronounce them husband and wife, they’ll be so busy taking pictures, cutting cakes, and tossing bouquets that if I were to interrupt and ask, ‘Now what was it I asked you to commit to in your wedding vows?’ each of them would stare at me with irritated incomprehension. A couple getting married is so caught up in the event that they barely can register what’s happening to them, much less the weight of what they just promised. Isn’t that why couples have so many wedding pictures taken? So they can later convince themselves they were really there.

“My thinking isn’t that they should hear a prepackaged set of vows from me that they likely aren’t going to remember. I like it when they carefully think through what they are promising. They should write it out in detail. Say it to each other. Keep it for the rest of their lives for reference. Live by it every day and every night until they die.

“You see, Ma’am, you ought to be a lot more interested in what their understandings are about what they are committing to than looking for a formal set of words they use to make the commitment in a public ceremony.”

I don’t remember anything else about that wedding. It could be that I was recovering.

So, yes, I love formal church weddings. But I hate all the rigmarole that goes with it. People getting so hung up on a tiny point here or a minor idiosyncrasy there that really means little to the only people that it should matter to: the couple getting married.

The Point of It All

Of all the things you remember about your wedding, even if it takes a glance at the album to remember, do you remember what you committed to do for each other? If you can’t say it exactly, answer this: What do you believe you committed to the day you married? Can you write down the important parts, make bullet points or paragraphs?

Write all the things that are important to you, and to your mate, and agree that these are the commitments you make to each other. Maybe you can have another ceremony. Invite your friends or just have it by yourselves over a cup of coffee. Look each other in the eye and make or re-make the commitments that will keep you together for a lifetime.

Keep the paper they are written on and review often!

A Commitment Made Seriously

If so, you may make it fifty or more years. If not, you may be at the whim of your emotions, and we all know that emotions can be very erratic.

It’s not feeling good that makes a marriage work. It’s commitment. What is yours?

This article was written by Joe Beam. Joe founded LovePath International, an organization that provides marriage help to hurting couples. You can follow him on Facebook by clicking here.

Filed under: Grow Your Marriage Preparing for Marriage