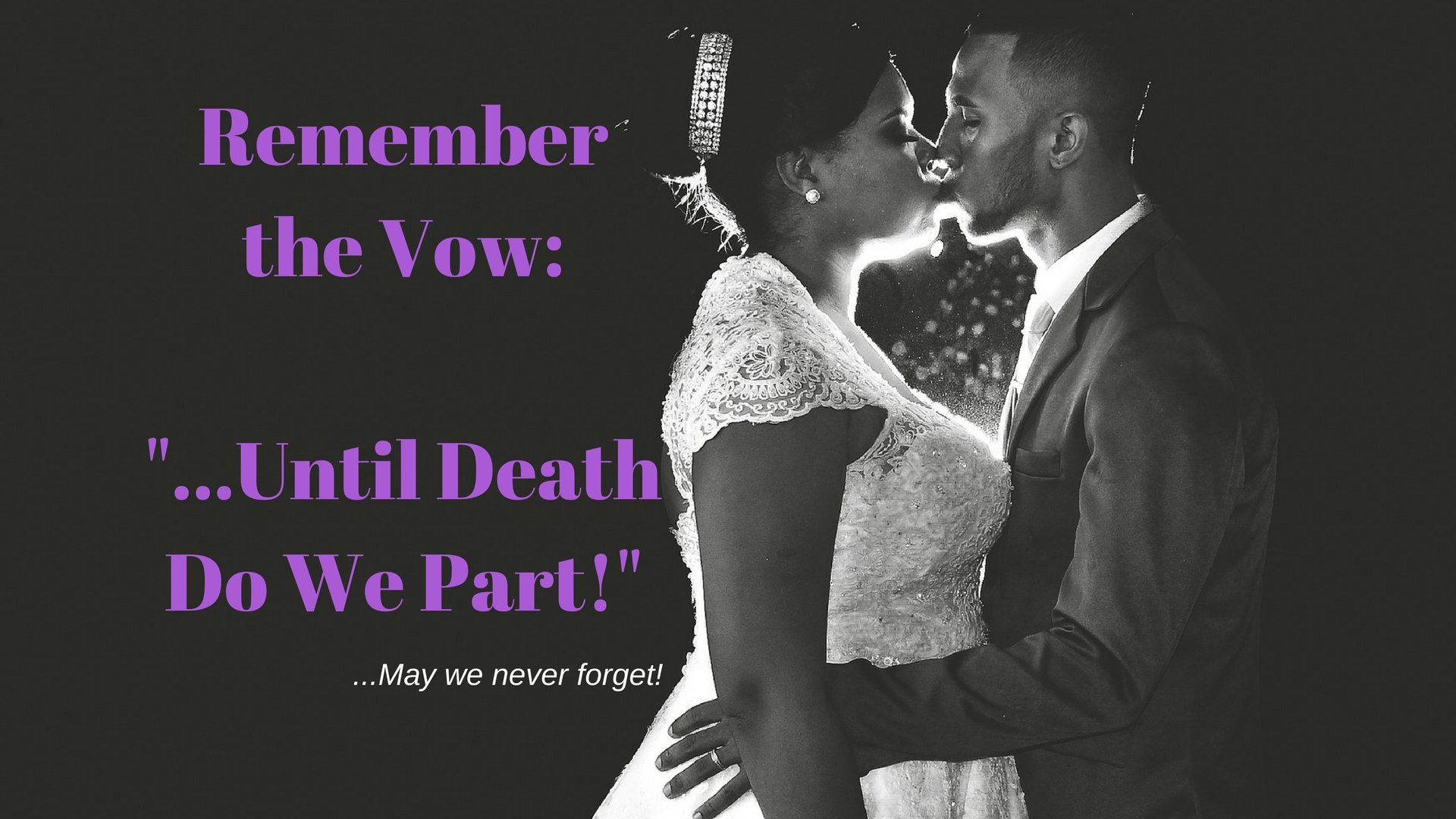 I dare say that few of us would think we’re “blinking” (or looking with “indifference”) at failed marriages. But when I read something written by Nancy Leigh DeMoss in the book, The Quiet Place: Daily Devotional Readings

I could see how she would say that many people do. What it did for me though, is it stirred my heart, and again renewed my vow not to hear about failed marriages and look the other way.

These particular devotional thoughts were based on the scripture in Jeremiah 9:18, where it is written:

“Let them come quickly and wail over us till our eyes overflow with tears and water streams from our eyelids.“

“Sin’s toll is evident everywhere around us. Crazed gunmen enter schools and shopping malls and commit random murders. Multiplied millions of children are shuttled back and forth between two parents who have broken their marriage vows; in many cases they are also violated at the hands of stepfamily members.

“Complete strangers meet by way of the Internet and proceed to abandon their marriages and families.

Young people —even in Christian homes —embrace a partying lifestyle. They become entangled with sinful strongholds from which they spend the rest of their lives trying to break free.

“And how do we respond to these calamities? We blink. We change the channel. And we check last night’s ball scores. And we check out emotionally, ultimately becoming numb and indifferent to the barrage of such realities.”

Sadly, that seems to be a pretty true picture. Partly it’s true because there are so many “calamities” going on around us that if we took it all in, we couldn’t handle it. And another part is that we can’t do much about every horrible thing that goes on in the world. So we look the other way because it seems impossible to make much of a positive difference. Others, frankly, just don’t care. But for those of us who should —those who are followers of Christ, we CAN do some things to help in some way.

Further down in the devotional thoughts that Nancy gave, she wrote:

“When we get in the presence of God —when we wait there long enough to hear His heart and His Spirit —He will shatter our complacency. He will turn our laughter into mourning and our joy into heaviness over the havoc sin has wreaked in our world.” (See: James 4:9.)

I can sure attest to the truth in what she wrote. Whenever Steve and I hear of a broken marriage, it breaks our hearts.

It mostly started several years ago, after hearing of a marriage of some dear friends that had broken apart. I was feeling disturbed and began earnestly praying about it. After a while, the Lord gave me a very real vision. I had just finished reading the scripture in Matthew 23:37. This is where Jesus was lamenting over Jerusalem. He was crying out:

“O Jerusalem, Jerusalem, who kills the prophets and stones to death those who have been sent to her! How often I wanted to gather your children together as a hen gathers her chicks under her wings, but you were unwilling!“

All of a sudden, I sensed that the Lord was saying, “That’s the attitude of so many married couples.” I then envisioned Jesus standing over crowds of married couples where he was crying out, “You who are married, what are you doing? What are you doing to marriage!!! O how I wanted to gather you to Myself to teach you how to REALLY love each other, and you would not have it!”

I can still hear that cry in my heart over and over again, at different times.

Yes, I know that sometimes it’s one marriage “partner” that abandons their vows, despite the pleas of the other to try to work on it to reconcile. I’m truly not trying to point fingers here. I don’t want to further hurt the wounded. And yes, I know that there are abuse issues, and unrepentant cheating issues that underlie many marriages that lead to divorce. But for the majority of “Christian” marriages that break up, those aren’t the reasons. Just look up the statistics. It’s mostly issues that don’t involve abuse or even infidelity issues.

Please know that Steve and I realize that we can’t do much to change the majority of marriages that are hurting and breaking apart. We’re just two ordinary people. BUT we have an extraordinary God who points the way to allow us to participate with Him. And THAT causes miracles to happen with us rejoicing that He has allowed us to be a part of it. What a privilege!

Please join God and also with us in praying for and perhaps working with those who are marrying and those who are married to make a positive difference. It may be behind the scenes in praying, donating, or some other way. Or it may be that God will lead you to work with one spouse or both. It may involve mentoring, or speaking Truth in Love. It may involve giving a good book, or pointing them to a good resource. I don’t know. We don’t know. But please don’t blink.

And please don’t think that you can’t make a difference. If WE can make a difference as we join with God, certainly nothing is impossible. God can help you to do so as well, when you put your heart and hand into His.

Below is just one of a multitude of comments we receive every year. I’m hoping it will build your confidence that God uses ordinary people. It was written by a man named “Mike.” And it was posted under the article, TO WIVES: Why Is Sex So Important.

“This article just turned on the light. I have for years felt there was something wrong with me. My first marriage split up because I was, in my opinion, not getting the attention or affection that I needed, which was only really achieved through sex. I left this marriage feeling extremely guilty. But couldn’t stay there any longer with numerous arguments in front of the kids and a nervous breakdown. This is all because of the lack of a physical relationship.

“I then met a fantastic woman who I have now been with for 18 years. She is everything to me. But over the last five years our sex life has gone seriously downhill resulting in all the old feelings of hurt, rejection, and mistrust returning. Over the last month this has been a serious situation with me. Again I’m getting closer to the edge. And although I know she still has strong feelings and love for me, the continual battle over having sex has caused serious problems between us.

He goes on to say:

“I read this article and it was like a weight was lifted off my shoulders. All of a sudden I was allowed to feel the way I did if she said, NO. I wasn’t weird. It was just human nature and the way us men are made. I emailed the article to my wife and waited for the reaction, not knowing what to expect. What I got was ‘oh my God I didn’t realize.’ We talked, yes talked, not argued for the first time about sex in a long time. And all the pressure that existed on both of us was lifted.

“I don’t expect that there will be a dramatic improvement. However, there doesn’t need to be. I totally accept that she isn’t going to be in the mood all the time. But she now understands what sex means to me and how important it is. She knows that because of this we will both work together to make it right. Thank you. I believe your article saved a marriage.”

I believe that God saved a marriage, using a married couple who said, “yes” when He inspired us to go the extra mile in helping those who are married. And if that’s not enough to convince you that God uses ordinary people, just go into the “About Us” section in the top bar of this web site. Go into the “How God Uses This Ministry to Help Marriages.” You can read a whole lot more testimonies of what God is doing, as we put our hands into His.

TRULY I’m not encouraging you to do this for any other reason than for you to gain confidence that God can use ANYBODY who is willing to effect a change. The change may seem small, but it all adds up. This is just like every drop of water that contributes to the bigger scheme of things in the mighty rushing river of what God wants to do in and through every one of us.

May He empower you, and may you NOT blink when He calls as you spend time with Him, asking for the “manifestation of the Spirit” He wants to give to you “for the common good.” And whatever that looks like, may we together, never forget to reveal and reflect the love of Christ within our marriages!