“‘Don’t shower me with love and kisses —just whisper softly, ‘I’ll do the dishes.’ This is where REAL LIFE happens in a marriage. When couples accomplish the tasks of life TOGETHER, they free up time to pursue other interests, enriching their relationship.” 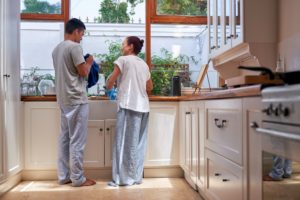 This is how David and Janet Congo describe a great way to work together as husband and wife from their book, Lifemates, published by Cook Communications. We’re sharing their thoughts on this matter, hoping it will give you ideas to consider. This used to be an area of contention in our own marriage so we especially appreciate what the Congo’s present, on working together to get the basics done, so EACH spouse has equal time and energy to do other things that are more interesting. They write the following on this issue:

Athletes have to practice their fundamentals, whether they have an audience or not and whether they feel like it or not. They do the mundane things when no one is looking. They have to fight through all the times when it’s just plain work. What athlete wouldn’t like to take a break from those fundamentals? Yet they become tremendously important in the final few moments of a football game.

If we’re investing in making our lifetime relationship mutually beneficial, the little things, the fundamentals, the draining things, have to be accepted every day. Paul challenges each of us to offer our bodies “as living sacrifices, holy and pleasing to God“(Romans 12:1). In the same passage he writes, “Do not think of yourself more highly than you ought, but rather think of yourself with sober judgment” (v.3).

James made a good living for his little family of three. Together he and his young wife, Lisa, had decided that when they started a family Lisa would be a stay-at-home mom. She left her career to raise their children two months before their first child was born. Over the past couple of years, however, Lisa has felt increasingly devalued by her husband. It appears to her that he thinks she plays all day.

It is true that she has more choices schedule-wise than James does. She can work a women’s Bible study and a weekly tennis game in among the cleaning, cooking, chauffeuring, and grocery shopping, while his work setting doesn’t afford him that freedom.

If Lisa asks him to assist her with any tasks, James’ response is increasingly sarcastic. He seems to insinuate that she’s inept because she hasn’t accomplished everything on her list. When he does help, he grumbles and complains all the way through the task. Lisa finds his attitude torturous to endure.

The final straw happened at a Christmas party at James’ place of employment, when he cracked a joke in front of Lisa and an attractive female coworker that demeaned homemakers.

Lisa was hurt and angry. As they were driving home, she told James that she was too upset to discuss the incident at that time. She asked him to set an appointment for the next day when they could talk about his comment. She asked him to be prepared to finish this sentence for her at that time. The sentence was, “If I were to admit that what you do is work, I…”

When they sat down the next day, James had both a different attitude and an entirely different perspective. He had taken his wife’s assignment seriously. The first thing he did was to apologize to Lisa for the put-down he had slammed at her the night before. Then he said, “I resented the sentence completion assignment, but it also haunted me.

I woke up early this morning with it on my mind, and I think I’ve clarified a few issues in my thinking.” With that he handed her a paper on which he’d written the following:

If I were to admit that what you do is work:

• I’d be more willing to help you.

• I’d acknowledge that you make my life easier.

• I’d be amazed at your stamina.

• I’d see how mundane many of the tasks you have to complete are.

• I’d understand some of your frustration.

• I’d see your need for a creative outlet.

• I’d change my attitude that I’m the only one doing anything valuable because my work has a paycheck attached to it.

James and Lisa reached for each other. Lisa thanked him for taking her request seriously. Lisa acknowledged the load James carried at work. She expressed gratitude for his faithfulness to the family financially. She expected to do more of the chores, at this life stage, because she was at home with the children.

James also had a request. He asked Lisa not to comment on his cleaning style unless he asked for her advice. He said, “I hate getting criticized for not doing it your way. It brings up feelings I had as a little boy when my mother got upset at the way my room looked.” Lisa agreed to stop trying to change the way he did things. Then she asked, “What do we do if we forget to do what we promised?”

After a few moments, James came up with a plan. “I think the person needs to apologize because they’ve let the “team” down. Then I think he/she needs to do one chore on his or her partner’s list.” They shook on that agreement.

This conversation was a turning point in their relationship. Once a month they reevaluate if their plan is still working for them. With each stage of life and as more children have entered the family, the “Chores Are a Bore” list has been revamped. They now have their routine down to an art form. The rewards have been their sense of teamwork, more free time to enjoy together, and an increase in affection.

Some working couples agree to share housework more or less equally. Others budget money to hire someone to take over some of the household chores. Whatever your situation, we’d like to challenge you to adopt the slogan for Nike athletic shoes, “Just do it!”

There’s a radical difference between saying you care and showing that you care. Once in a while, surprise your partner by doing an extra chore quietly, lovingly, and graciously. “When you do something for someone else, don’t call attention to yourself—or the God who made you won’t be applauding” (Matthew 6:1-2, The Message).

We hope you’ve gained a fresh perspective on how we can handle even the unpleasant tasks in a way that will honor each other, but more importantly, honor God.

To give you additional ideas to prayerfully consider, please click onto the following web site links to read:

• HOW TO CREATE A FAIR DIVISION OF LABOR