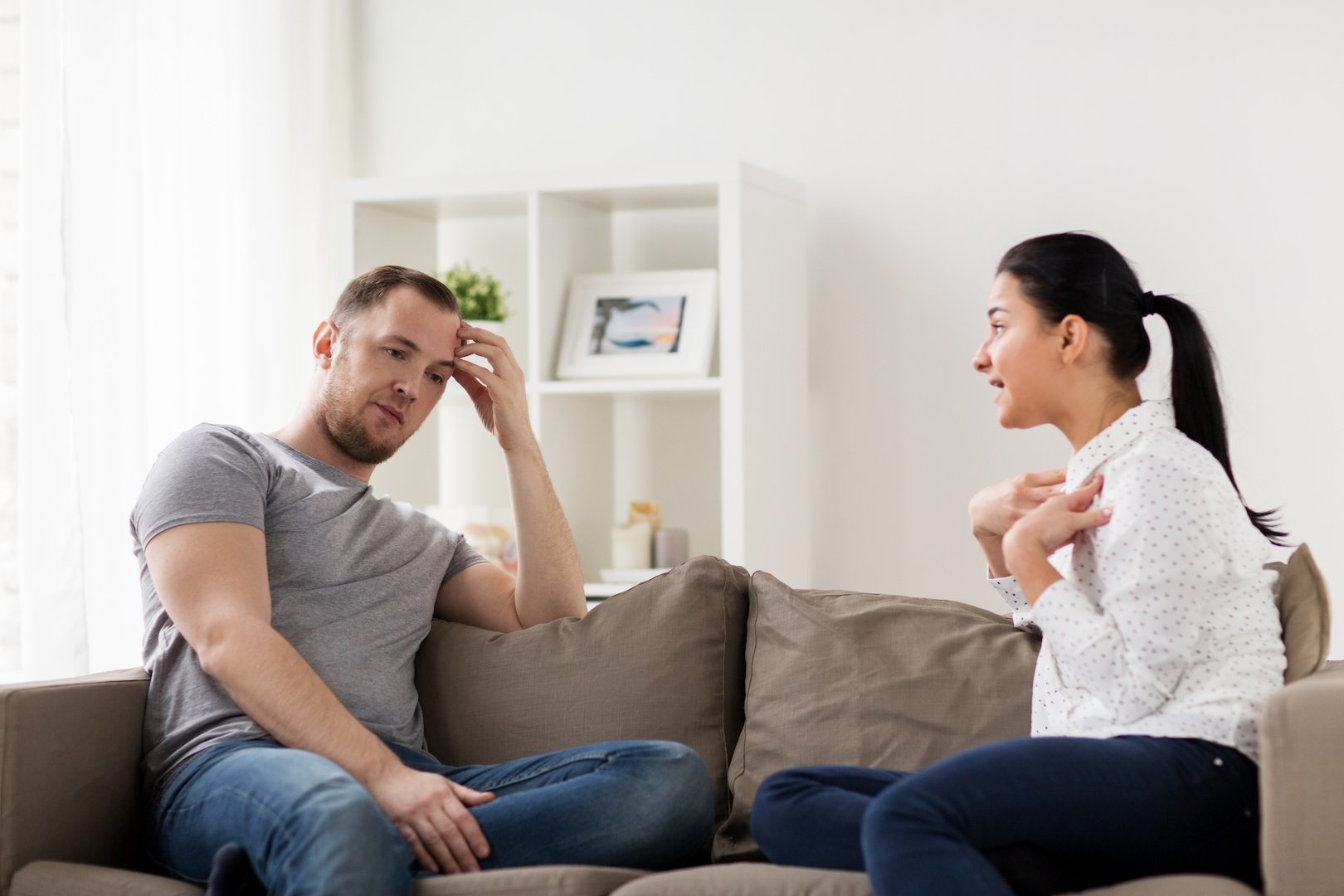 We’ve all heard the phrase, “Honesty is the best policy.” And we agree. That’s especially true within marriage. We’re all about being truthful and honest with our spouse. It’s difficult to build a healthy, loving relationship without it. But being brutally honest is another thing.

We can speak in all honesty in respectful ways without being vicious about it. If we “just say it as it is” without any filtering involved on our part, our spouse will most likely feel attacked and will slam his or her ears shut to receiving what we have to say. And what good will that do?

We totally agree with something that blogger Martine Forman said on this issue:

“I don’t think honesty needs to be brutal, especially in an intimate relationship like marriage. I think there is always a way to deliver honesty to your spouse with compassion and love. Shouldn’t we try to keep brutality out of the marriage equation?

“This doesn’t mean your spouse will always like what you have to say. It also doesn’t mean that your spouse won’t end up hurting your feelings (or the other way around). But this should mean that regardless of how your spouse perceives your honesty, he or she believes it comes from a place of love, not malice. Your spouse should feel like you have his or her best interests at heart.”

Now we have to say that some spouses will receive the truth in negative ways no matter what you do. Sometimes the truth hurts no matter how it is delivered. And many spouses don’t want to hear it. But speaking the truth, when you know it needs to be said, isn’t the problem. It’s whether or not you are “speaking the truth in love.” Plus, you need to consider if you are being wise in the timing, the setting, and the way in which you are delivering it (not to mention your motive for speaking it). If you are speaking the truth in love, and are sensitive to other considerations, you at least know that you have done your part in contributing to the health of your relationship.

We confess that we haven’t always spoken the truth in loving ways with each other. At the beginning of our marriage we blurted out what we believed to be the truth whenever and however we wanted to. Yes, we were being brutally honest, but we were also being stupid. We fell into the common lie that just because we had a marriage license, we could just be our own “natural selves.” But our natural selves didn’t always have a tendency to say and do things that were wise. That’s where knowing and applying biblical principles is important.

The principles for growing a loving marriage are the principles for living, which we can find throughout the Bible. A good example of that can be found in 1 Corinthians 13, and beyond. We have some of them listed in the article, Communication Scriptures for Your Marriage. Check them out!

Concerning this topic we heard an excellent interview with Shaunti Feldhahn a while back on the radio program, Focus on the Family. Shaunti is a researcher, speaker, and a best selling author of several books. She recently came out with a terrific one titled, The Surprising Secrets of Highly Happy Marriages: The Little Things That Make a Big Difference. It’s based on a nationally represented survey of over a thousand couples of “highly happy couples.”

In this interview Shaunti talked about her findings in this research project and some of the “habits” that these couples employ in their marriages. These are “little things” that helped to grow their marriages into loving ones. The following is something she spoke about in the interview titled, “Uncovering the Secrets of a Happy Marriage” as it pertains to being brutally honest.

“What’s really fun is one of the other habits, and this is a little one. I almost missed it. I didn’t realize what a big deal it was until I started looking into the numbers. We’ve gotten into this weird habit when we’re in a marriage. We let it all hang out. We think, I should be able to say whatever is on my mind. I should be able to tell it like it is, because brutal honesty is really important.

“I asked one woman about this who had that sharp, snappy, sarcastic ‘teasy’ attitude. But she had a really happy marriage. I said, ‘What do you think about brutal honesty?’ She looked alarmed and she said, “No, no, no, no, no. It’s dangerous.’

“‘You know, how you sometimes see somebody speaking to a husband or a wife in a tone that is sharp and curt? You think, ‘Would you ever say that or use that tone of voice with your best friend, like you were talking to your spouse like that? Why would you ever use that tone of voice with your spouse?’ One of the reasons these couples were happy is, they had a high level of just kindness.”

Here’s some additional Advice to note:

We totally agree with something Dr Phil McGraw said on one of his television programs:

“You cannot un-ring a bell. After you’ve said something, you can’t take it back. It may seem like a good idea to say something at the time, but your partner will hang on to that hurt. There’s a huge difference between being genuine and being brutally honest. If your partner shares his or her vulnerabilities and you attack them, you violate the trust and emotional integrity of your relationship.

More on Being Brutally Honest

In Shaunti’s book, she shares something a “happily married man” told her on this issue:

“‘Some people have this weird dedication to being ultra direct, not caring how it’s perceived,’ he told me. ‘They say, ‘Hey, that’s just the way I am—take it or leave it.’ Well, yeah, that may be the way you are, but that is why you are being left! How’s that working for you?'”

That’s a good point to consider! In another part of the book (that we highly recommend you obtain), Shaunti wrote:

“One woman asked, ‘But shouldn’t we be able to let our guard down with our spouses and not be on our best behavior? Should we have to walk on eggshells? Isn’t marriage supposed to be the one safe place we can be ourselves and not be ‘on’ all the time?’

It’s The Way You Are Honest

Counselor Paul Elmore wrote an article about being brutally honest. He concluded with the following statement:

“On a final note, the WAY you are honest is just as important as what you are being honest about. You can get in someone’s face and deliver truth in highly offensive ways, or you can be compassionate, kind, understanding, and loving. I’d suggest the later. It will work out better for you in the long run.”

I/we agree with Mr. Elmore on the benefits of being honest, particularly in marriage. We need to be honest with our spouse. If we aren’t, then we can’t have a very deep relationship. But we don’t have to be brutal about it.

The medicine industry has discovered that fact. People are more receptive to taking their medicine if it is palatable to swallow. That’s why they often sweeten the raw taste so the person will actually buy into using it. It’s a principle we should adapt too—sweetening the “medicine” so it goes down a bit better.

Being Brutally Honest VS Being Graciously Honest

So when you are delivering “the truth” to your spouse, don’t act as if you are better or smarter than he or she is. That is being prideful. And we know what the Bible says about pride. It can lead us to all kinds of trouble. Don’t imply in any way that he or she is stupid. Make sure you don’t reduce yourself to name-calling, or belittling your spouse. And watch your body language and the tone of your voice. There is a difference between firmness and pridefulness, and viciousness. You know the difference. Apply wisdom here.

Speak the truth, but give grace as you are doing so. Give the same grace that you would want to receive from your spouse when he or she speaks to you.

This is what we’re told in the Bible as far as “speaking the truth in love.” You still speak the truth, but you do it in a respectful way, motivated by love. That way it has more of a chance of being received in a way that will result in changed behavior. If it isn’t received well, you will at least know that it isn’t because of the way you delivered it.

We hope this helps. We’d sure love it if you would give additional tips below on this issue. That way we can all benefit from the insights you can give, as well.

Here is an article that supports and will give guidance on this issue:

• Be Nice – Be Kind in Marriage

Leave a Reply to MARALDEA from South Africa Cancel reply

10 responses to “Being Brutally Honest in Marriage”