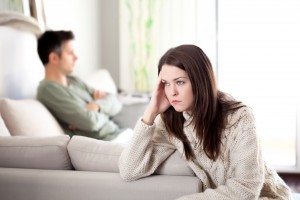 Have you seen it? Have you lived it? We’re referring to creeping separateness that grabs hold of couples in their marriages. Author Sheldon Vanauken wrote that he and his wife Davy “looked around and saw that ‘the smile of in-loveness SEEMED to promise forever, but friends who had been in love last year were parting.” Questioning why, they saw that “the killer of love is creeping separateness” —“people gradually drifting apart, sometimes without even noticing it.”

In his book, A Severe Mercy Sheldon explained it a bit more this way:

Here’s what Dr Steve Stephens writes in the book, “Marriage: Experience the Best” about this matter:

“Over the years I’ve also observed creeping separateness. A couple marries and becomes one. At first there is good communication, togetherness, romance, and all the other essentials that make a successful marriage. Eventually time erodes their commitment. It starts slowly—he does his thing and she does hers. There’s nothing wrong with that, it’s probably healthy, but they stop communicating about their activities. Soon she has her friends, he has his, and somehow they pull the couple in opposite directions. Different hobbies, different causes, different experiences —all without a means of connecting the two.

“In time there’s more separateness than togetherness. There’s more that isn’t known than is known about one another. The two feel like strangers. Oh, they may eat dinner together, sleep in the same bed, may even go to church together, but they feel distant and disconnected. They look at each other and wonder what happened and when did it happen. Something has pulled them apart and they can’t figure out what it was—it just happened.”

Busyness of Life Contributes to it

We don’t know about you, but we’ve sure seen and have lived through times where the condition of CREEPING SEPARATENESS has snuck in. It’s not difficult at all, where, because of the busyness of life, we’re lulled into boredom and dissatisfaction with our lives together. This is especially true when we’re raising a family. That is because we can often find ourselves running parallel lives to get it all done.

And because of that busyness, it can happen that life and trying to keep up with all we feel we have to do will squeeze in between us in our marriages, without us noticing —pushing us apart. Eventually cracks in the marital relationship can develop and grow —cracks that eventually cause a divide between us.

“One day you are walking through your living room and notice a slight crack in the wall. It is barely visible. So you think, ‘It’s too small to worry about today.’ Now, this is a perfectly plausible statement. The crack is minor and not worth re-ordering your day over …Several months later your wife notices that the crack has become sizably larger. It is now very noticeable. So she asks if you would do something about it. You say, ‘I’ll get to it when I have time.’ When you tell her that, you’re not lying. You really do intend to fix it when you have a free moment.

“The problem is that those moments never come. Because you haven’t found that mysterious free moment in your schedule, the crack in the wall is now three inches wide at the top. And it runs from ceiling to floor. It has morphed from a minor to a major problem. It simply cannot be ignored any longer. At this point, however, it will take real skill to fix. So you say to yourself, This is way too big for me to deal with. Overwhelmed with what you’re facing, you realize you’re incapable of solving it.”

That’s the way this “creeping separateness” begins and often ends. It starts small, hardly noticeable . It seems hardly worth the time and effort to fix it. But eventually it can get away from you. Please be aware of that.

When there is a small crack appearing in your relationship, address it sooner, rather than later. Within more recent years, Steve and I have learned to be more aware of the state of our togetherness. We’ve learned to keep shorter accounts on whether or not all is well with us within our marriage. We encourage you to do the same… starting today. Look around the web site here. We have a lot of tools and insights to help you in this mission.

Whatever you do though, please don’t use the issue of creeping separateness as an excuse to divorce saying, “we just grew apart.” We’ve met many of those people… so sad. And what’s really something is that many of them find themselves even more unhappy later on after they divorced, and/or remarried. They aren’t the only ones. Here’s something to note:

“Richard Land, of the Southern Baptist Convention, points to a University of Chicago study involving people who had described their marriage as ‘unhappy’ or ‘very unhappy.’ Of those who divorced, only 19 percent were happily remarried 5 years later. Of those who stayed in the marriage, more than 70 percent said they were now ‘happily’ or ‘very happily’ married. (Jane Lampman)

What we can conclude from this study is that divorce isn’t the answer to solving a non-abusive situation —working on it is. That’s why we want to encourage you —if you allowed yourselves to grow apart over time, put the intentionality in to grow back together. Apply the principles of loving each other, as the Bible (and other helpful resources) can teach you. Do all of this in prayerful, pro-active ways. God, whose very name means Love, can teach you how to love each other and combat the war we should wage against separateness. Remember what Jesus said, “What God has joined together, let no man separate” … and that includes us!

Here’s a question for you, “how do you work to keep separateness out of your marriage?”

As we’re told in Ephesians 51-2, may you “be imitators of God, as beloved children, and walk in love, as Christ loved us and gave Himself up for us, a fragrant offering and sacrifice to God.”