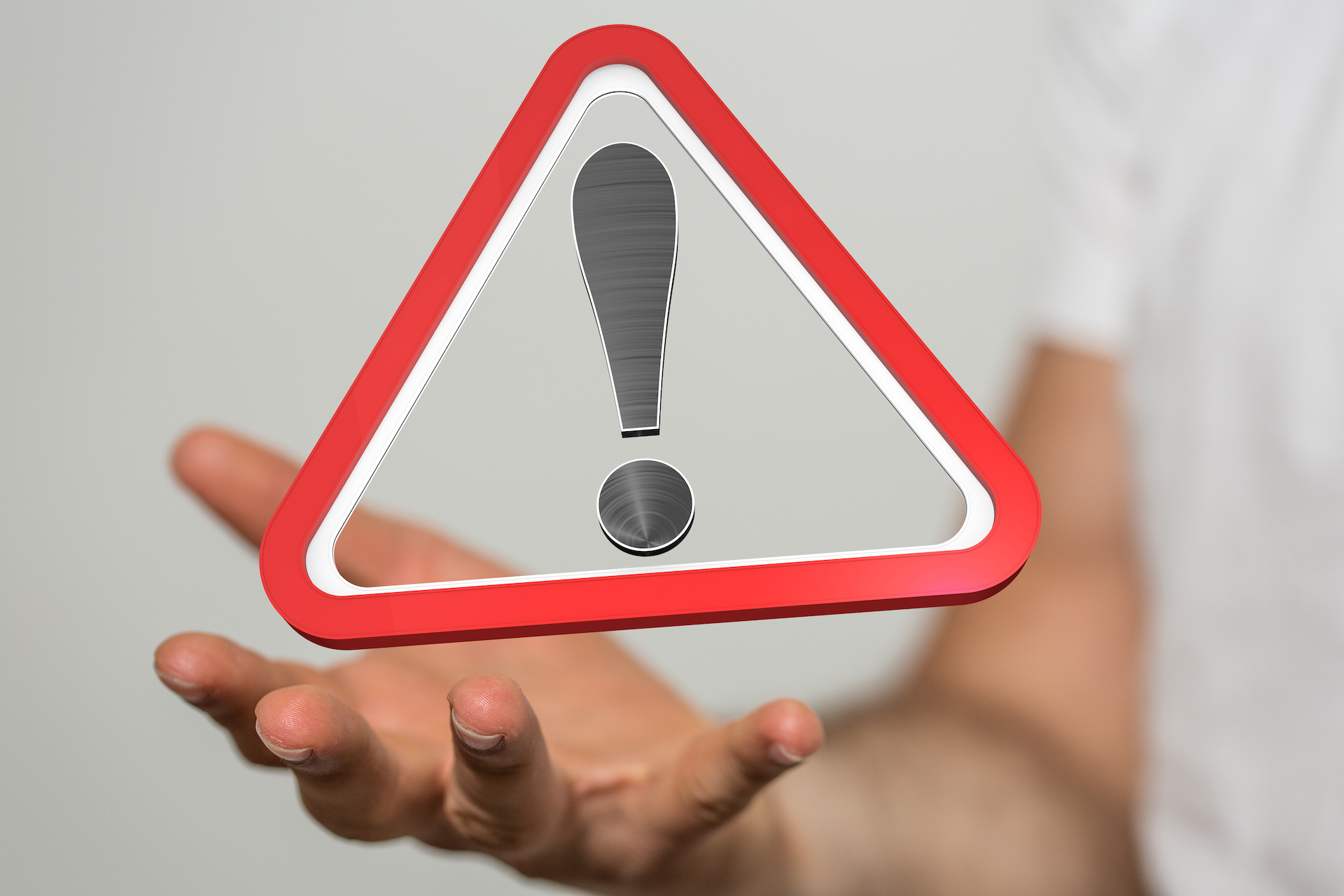 Some matters should be common sense; but obviously, they aren’t to everyone. Some people have to have warnings written out clearly for them. And even then, there’s no guarantee that they will heed the warnings. They may not believe they apply to them. I’m talking particularly about marriage here —reasons to NOT marry. But when “don’t marry” warnings appear, you need to pay attention. You will seriously regret it if you don’t!

We just received an email where the person has been married for 3 weeks. This person is asking if it’s okay to get a divorce. THREE WEEKS!!! Were there NO red flags waving beforehand to warn this person that the one they were marrying wasn’t as committed they were? What about their commitment to God? Were there warning signs that this person wouldn’t see the vows to be sacred?

It’s common for us to receive emails and comments, posted on the web site, where people are married 6 months, or a year or so, and they’re already separated. And most likely, they’re already heading for the divorce courts. It’s highly unlikely that the wedding bills are even paid off; and yet they’re on their way to close the door on the marriage already!

What’s going on in today’s world? And why is it that, “Christians” are often at the head of the line on this one? My heart is breaking over this. I can only imagine what God is thinking. He must be grieving when He watches His “children” treat the sanctity of marriage and their vows in this way.

I wanted to title this blog, “Don’t Marry If You Intend to Keep Dating Different People!” I know that sounds obvious, but sadly, it’s not. We hear quite often from spouses who discover that their spouse never stopped dating other people. Or they marry and they start dating their ex or a “friend” soon afterward. The excuse they give is “we never meant for it to happen” as if that makes it okay.

Don’t Marry If You Intend to Date Other People

Why marry if you don’t intend to stop dating other people? What’s the point of marrying? Is it all about having a big party? If so, why not just throw a big party and skip the exchanging of VOWS part —vows that appear to mean little except for a brief moment?

And here’s another one… why marry if you intend to have sex with others on the Internet —whether in picture form or cybersex through Skype and such (which essentially is cheating on your spouse)?

In another twist on this same issue, here’s something that Dr Randy Carlson wrote in a Family Life Radio magazine a while back. He gives “Seven Reasons Not to Get Married” that are good ideas:

You should probably not get married [and that’s putting it lightly] IF:

1. You are unwilling to put the needs of another person above your own.

Romans 12:10 says, “Be devoted to one another in brotherly love. Honor one another above yourselves.” In the Greek, “devoted” is defined in this verse as reciprocal tenderness, while “honor” is identified as showing deference to another person. How often are these characteristics apparent in how you behave toward your fiance or spouse?

2. You are easily offended, carry grudges and are unwilling to forgive.

An overly sensitive, vengeful or calloused attitude has no place in any relationship, especially a marriage. The Bible gives you the challenging yet correct standard: “Forgive as the Lord forgave you“ (Colossians 3:13).

3. You are an abusive person (mentally, emotionally, physically).

Author and domestic violence expert Lundy Bancroft finds that abusers —who, by the way, are primarily men but also include women —abuse for a variety of reasons, including a need for power and control, finding someone to blame for their problems, and wanting to be the center of attention. Do you see yourself anywhere in these attributes? [And what about the person you are thinking of marrying… is he or she an abuser? If so… DON’T MARRY THIS PERSON!]

4. You do not share the same beliefs, values, life priorities or vision.

“For this reason a man will leave his father and mother and be united to his wife, and they will become one flesh“ (Genesis 2:24). Oneness is essential in marriage, and its foundation is built on these characteristics.

5. You have an unresolved addiction problem.

“Like a city whose walls are broken down,” Proverbs 25:28 says, “is a man who lacks self-control.“ The Web site Addictions.org lists a variety of harmful addictions affecting millions of people, including addictions to sex, shopping, sleeping, people pleasing, perfectionism, pornography, and overworking. Each will undermine a marriage if ignored. [The same goes if the person you are considering marrying has unresolved addiction problems… run, don’t just walk away!]

6. Your career is the most important thing in your life.

Philippians 2:3 says, “Do nothing out of selfish ambition or vain conceit, but in humility consider others better than yourselves.“ Selfish ambition is interpreted in the Greek as “a desire to put one’s self forward, a partisan and fractious spirit,” while vain conceit is identified as “groundless, empty pride.” Examine how your profession shapes who you are. Does it bring out these traits in you?

7. You are unwilling to be an active sexual partner with your spouse.

As a couple, read 1 Corinthians 7:1-5. The Bible speaks directly to this vital issue; verse 3 is clear: “The husband should fulfill his marital duty to his wife, and likewise the wife to her husband.“ There’s no room in a healthy marriage for sexual games, and an active sexual relationship works to ward off temptation to sin.

Below, we’re linking to another very thoughtful article on this issue that we encourage you to read. Pastor Roger Barrier gives the warning to:

• THINK TWICE BEFORE MARRYING THESE 7 TYPES OF PEOPLE

I realize that I’m probably preaching to those who already know these points. But JUST IN CASE that’s not true, it’s important to write all this out plainly, HOPING that the intended will stop the marriage if any of the above applies. Also, I need to vent this. My heart is so very heavy over all the divorcing that’s going on —particularly when children are involved.

And PLEASE DON’T MARRY IF you and your fiancé do not intend to take your wedding vows very, very seriously. Do everything you can to be a marital team. Be one that works together to resolve your problems. Find ways to get through them in the healthiest ways possible, and persevere to the nth degree. Your vows are not just fancy words, but promises. And it’s like what we’re told in the Bible, “Let your yes be yes and your no be no.” Otherwise, you become a breaker of promises, rather than a person who lives to keep his or her promises, as God does.

In 1 Corinthians 7:28, the Apostle Paul warns us that “those who marry will face many troubles in this life, and I want to spare you this.“ I do too. Read the whole chapter of 1 Corinthians 7 for many warnings about marrying.

If you intend to keep acting like you are single-minded, even as it concerns ministry, don’t marry. You don’t have the same freedom to do what you please, when you please. You will now have another person (and perhaps later a family) to consider in all you do.

And that’s okay. Don’t get me wrong, marriage is wonderful, but it DOES involve A LOT of sacrifice, perseverance, and many other other tough integrity issues that you will have to plow through to have a good one! Please keep that in mind (beyond the party of the wedding reception).

I want to end with a quote that I’ve used many times but I believe it to be SO true. It comes from something that Bill and Lynne Hybels wrote in their book, Fit to Be Tied

“Marriage can be wonderful. It can be deeply satisfying and mutually fulfilling. But if it becomes that, it is because both partners have paid a very high price over many years to make it that way. They will have died to selfishness a thousand times. They will have had countless difficult conversations. And they will have endured sleepless nights and strained days. They will have prayed hundreds of prayers for wisdom and patience and courage and understanding. They will have said, ‘I’m sorry’ too many times to remember. Plus, they will have been stretched to the breaking point often enough to have learned that, unless Christ is at the center of both their lives, the odds for achieving marital satisfaction are very, very low.”

Please take your vows very seriously. And make sure that the person you intend to marry is at LEAST as equally serious as you are. Make sure you both are as serious as God would have you, before marrying.

One response to “Don’t Marry If…”