The question was posed to us if flirting on the internet, by someone who is married, considered cheating. Here’s a portion of the answer I gave: 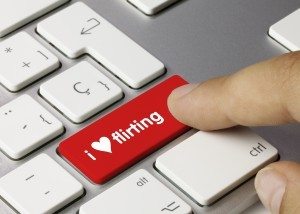 If someone is married, why would they think it’s permissible to flirt with anyone other than with their spouse? What about Internet flirting? Aren’t they putting themselves into a situation where they can fall into temptation? They’re playing with the emotions of someone else who shouldn’t be flirting with someone who is married. Isn’t this called being a “stumbling block” in tempting them to sin?

Is Flirting on the Internet Considered Cheating?

That other person may not know the person who is flirting with them is married. So, what if they build up romantic feelings for the flirting married person and they eventually find out that this person is married, is that fair? It puts them into a place of pain as they then have to make the decision to tear their heart away from someone they care for. It’s either that or they end up participating in cheating —either way, they lose.

I sure wouldn’t want that done to me if I were single! And I think the person who is flirting should consider that other persons’ feelings also. That’s really being cruel and inhumane to have so little compassion on the feelings of others —to be so insensitive that they would consider doing that to them!

I’m reminded of the Pharaoh of Egypt in Genesis 12 when Abram allowed his wife to be passed off as an unmarried woman and Pharaoh took her into his palace. It says in verse 17, “But the LORD inflicted serious diseases on Pharaoh and his household because of Abram’s wife Sarai. So Pharaoh summoned Abram. ‘What have you done to me?’ he said. ‘Why didn’t you tell me she was your wife? Why did you say, ‘She is my sister, so I took her to be my wife’?”

Contributing to Another Person Sinning Through Internet Flirting

One can argue that the circumstances went a step further than flirting. But it still comes down to one person contributing to another person sinning, and innocent people are hurt in the process.

Also the Bible talks about the fact that if we do something in our thoughts it’s the same as actually doing the deed itself. Flirting is being sexual in your attitude and/or words, so it doesn’t leave out the fact that this is defiling the Marriage Bed —which the Bible warns us against doing!

So… tempting someone to flirt with you when you’re married is causing them to sin. Is that something we should do —contribute to tempting someone else to sin? Would that spouse want that to be done to their daughter or son? God doesn’t want it done to His either.

What About the Feelings of the Spouse?

And even if you put all of this aside, what about the other spouse who has their marital partner flirting with someone else? How is this cherishing and honoring them (as the flirting partner promised in their wedding vows to do)? Can this be considered as “forsaking all others” as promised in the wedding vows? How does this make the faithful spouse feel? I can tell you that it hurts into the core of their being! How is that humane?

It takes an insensitive and/or immoral person to do that to someone else! We’re to be different than the animals. Being creatures of compassion is a large part of what separates us from the animals. I don’t see much compassion in this situation. It sounds more cruel to me!

It all comes down to making the choice of being a promise-keeper or being someone who only cares about themselves —that they don’t care who they hurt in the process. THAT’S what the person is deciding when they flirt with someone else who isn’t their spouse —whether it’s on the internet or elsewhere.

Just because it’s on the internet, it doesn’t mean that integrity is supposed to be removed from our actions. Integrity is who you are, and what you do, when no one else is looking but God. And flirting outside of marriage screams against being a person of integrity. It says, “I’m self-centered and I don’t care who I hurt in the process! What I want is what’s important here!”

Here’s another article that could bring further insight into this issue:

• EMOTIONAL ADULTERY: How Husbands and Wives Disrespect Each Other

83 responses to “Is Flirting On The Internet, Considered Cheating?”