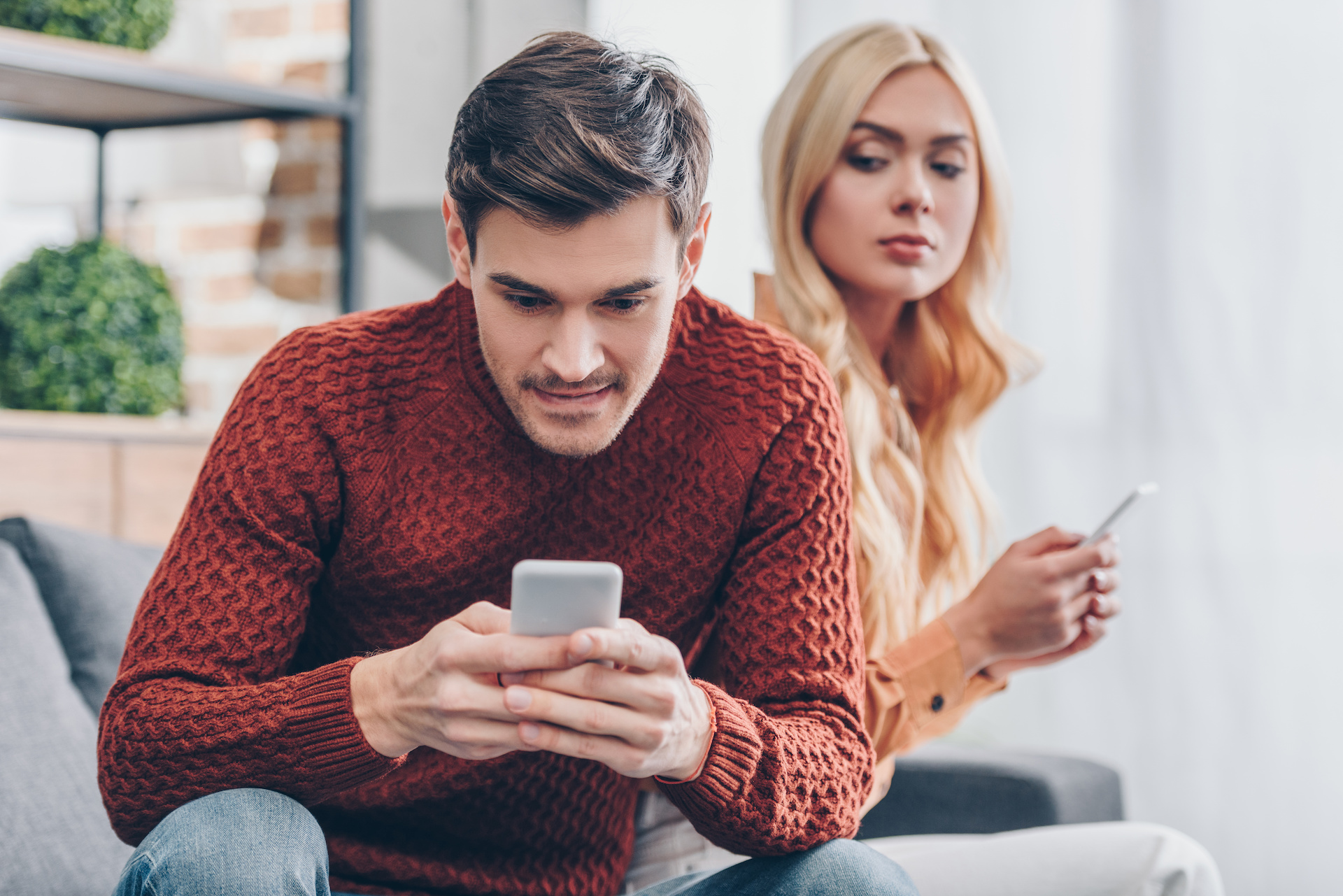 Repeatedly, we hear of little secrets that couples keep apart from each other. Sometimes, it’s a secret phone that one spouse is hiding from the other. Or it could be a secret “friendship” with someone their spouse would NOT approve of; and sometimes these secrets involve different social media activities where they lead secret lives that they hide from their spouse. Other times these little secrets involve an ex-spouse or someone from their past that secretly revives their “friendship”. These “little” secrets could even involve secret spending and/or gambling habits, and/or looking at porn. The list goes on and on.

But be forewarned; these secrets won’t be kept in the dark forever. We’re told in the Bible (in Numbers 32:23) “Be sure your sin will find you out.” That’s a warning we need to take seriously!

And tragically, when these “secrets” are revealed (which most often they eventually are) it’s like a bomb goes off in the relationship. Some marriages survive the explosion (but not without causing some form of permanent damage). But other marriages can’t survive this type of devastation.

Most of these secretive behaviors are lived out in subtle ways at first. But eventually as these secrets grow in darkness they overtake that, which was once good.

In thinking about these secrets, we’re reminded of a scripture in Song of Songs 2:15. God’s word says, “Catch for us the foxes, the little foxes that ruin the vineyards, our vineyards that are in bloom.“ Even little foxes of little lies can disturb a relationship to the point where the root system is too trampled upon to grow any further. As a result, it shrivels and instead dies.

The Little Little Foxes of Secrets

There are many of these “foxes” that can destroy. To elaborate a bit, two of them that come immediately to mind is the computer and cell phones. We love the positive ways in which they help us communicate. But they can also undermine and destroy marriages.

When a person spends so much time on a social media device that it robs their spouse and family of time they need together… that device becomes a “little fox.”

Ask yourself—are you giving this disruptor more time than you should? And what about television? That can be another little fox that can suck up too much of your time. As a result, you can’t spend as much quality time with your spouse and family that you should.

We know this from firsthand experience. We’ve personally had to battle with these “little” media foxes in our own marriage. As a result, we’ve have had to make necessary adjustments when they’re needed. How about you? Do you need to make some adjustments, so these little foxes don’t ruin your marriage?

Other Secrets that Destroy

Additionally, when a husband (or wife) uses their computer or phone to look at unclothed images of people other than their spouse, please realize that this is more of a big wolf causing destruction than a little fox. It can kill a marriage faster than any fox can destroy a vineyard. And keeping it secret doesn’t help either. God has a way of bringing these secrets to light.

Here’s an important vow to make so you don’t get caught in that trap. “I will set before my eyes no vile thing.” (Psalm 101:3) Isn’t that a vow God would ask of a spouse to save their marriage?

This goes with the scripture, “Can a man scoop fire into his lap without his clothes [or marriage] being burned?“ The answer is no. The fire of sin cannot be played with, without it eventually causing damage.

And it can’t be done in secret either, thinking that it won’t hurt anyone. Secrets eventually are brought out into the light. We are told in God’s word, “Be sure your sin will find you out.” (Numbers 32:23) It is sinful to look at lustfully at anyone other than our spouse. It’s called adultery. Jesus said, “I tell you that anyone who looks at a woman lustfully has already committed adultery with her in his heart.“ (Matthew 5:28)

Here’s an article that can also be insightful to read concerning this issue:

And if you claim that this is all about protecting privacy rather than secrecy, please read the following article. There IS a difference:

This same principle applies to various forms of chat rooms, Facebook, Twitter, and other media outlets, as well. Adultery of the heart and emotions is still adultery. And even if your spouse cheats… it doesn’t justify cheating on your part. Stay away and “flee“ (as the Bible exhorts) from places of temptation. Chat rooms are a great vehicle, which the enemy of our faith uses to end marriages. Chatting with others may start out innocently. But too often dangerous lines are crossed where those that are chatting get emotionally closer to each other than they should. (And that can lead to physical closeness even though both people would claim, “We never meant for this to happen.”)

So, what we’re saying here is, it’s better to stay away from these areas of temptation than to be drawn into its sneaky grasp.

And what about cell phones? When a spouse hides his or her cell phone from their spouse, trying to block the other from seeing certain calls they are making or receiving WATCH OUT! And as we stated previously, some spouses even purchase secret phones.

Needless to say, there’s nothing innocent going on there. That is a form of cheating. If you have nothing to hide, you will hide nothing. And marriage isn’t about hiding. It’s about uniting and “cleaving” as God tells us. Secret calls separate and shows a lack of trustworthiness!

Are You Acting in a Trustworthy Manner?

“Being trustworthy means building transparency into the relationship, says Willard F Harley Jr., founder of Marriage Builders. ‘There are many steps couples can take to shield their marriage from secrecy and infidelity, Mr Harley told me recently. For instance, couples should have each other’s cell phone and e-mail information ‘at their disposal.’

“If there already has been an infidelity problem, a couple should review e-mails together before erasing them, he said. ‘Trust, to me, is earned, not assumed.'” (Cheryl Wetzstein from the article “The Best Spouse Will Take the Kitchen Sink Back” Washington Times)

“‘About five years ago,’ he said, ‘I came home from work, and my wife said, ‘I need to run to the store.’ I said, ‘Well, when we talked at lunch on the phone today, you said you had already gone there this morning.’ She said, ‘I did, but when I got home, I realized the cashier hadn’t charged me for this $52 sink fixture that I’d bought.’

“So, she ran out the door, and went back to this store. She went to the customer-service line, and they didn’t quite know what to do with her. Apparently, that’s not a problem they have very often —someone coming back, complaining that they weren’t charged.

“She said, ‘Why don’t I go through the line as if I’m going through the first time? That way you guys can get your money. Then I can have a clear conscience, and we can both go on happy.’ They said, ‘Fine.’

“I tell the students, ‘That’s my love story.’ And they look at me with amused with puzzled eyes. I then say, ‘Let me explain. None of you in here know my wife, but let me ask you a question. How much sleep do you think I lose at night wondering whether my wife is being faithful to me or not?’ After some thought, someone will say, ‘None.’ And I’ll say, ‘That’s right, but why?’ ‘Well, she took the sink back,’ they will say. And I’ll say, ‘That’s right. If I can give you a piece of advice based on what I’ve seen personally and professionally, it would be to marry someone who will take the sink back. Also, work toward being the kind of person who will take the sink back.”

“Integrity has been defined as ‘who you are when no one is looking.’ A person of integrity is convinced that the unrelenting pursuit toward wholeness and godliness is more valuable than fairness. Integrity has nothing to do with how the other person’s behaving. It’s doing what is consistent with the person you want to be regardless of the external environment. And serenity of spirit cannot be achieved until we accept full responsibility for our own actions and feelings rather than letting our spouse’s behavior determine how we behave.” (From the book “Authentic Marriages” by Jeff and Lora Helton)

A person of integrity does not play in secrecy with “little foxes” that will try to sneak problems into his or her life.

We encourage you to work to be that type of spouse —even if your spouse is not. Please do not entertain the enemy of our faith in this area of your married life. Let’s strive together to poke holes in the darkness, instead of contributing energy to it.