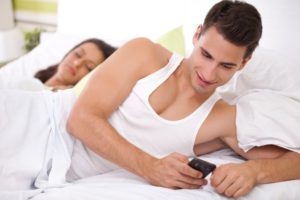 We hear it continually… “My husband says he needs his privacy.” …“My wife tells me that she should be allowed to have some things that are private, away from me.”

To that we say, yes, some privacy can be fine within marriage. But these spouses aren’t talking about privacy, they’re talking about secrecy. That’s a whole different issue.

“In marriage, secrets are as dangerous as lies. Marriage must be built on a foundation of total transparency and trust. You must prioritize trust and transparency in the marriage ahead of your own personal privacy. Unless you’re planning a surprise party or hiding a holiday gift, there are no places for secrets in marriage. Anytime you’re having a conversation, making a purchase, sending a text message, doing an internet search or doing anything else you hope your spouse never finds out about, your secrecy is actually an act of infidelity.” (Dave Willis)

We totally agree. And that is what we are talking about here—the difference between secrecy and privacy.

The following are a few quotes written by Dr Laura Schlessinger from her book, Ten Stupid Things Couples Do to Mess Up Their Relationships

— “PRIVACY is when you want to go to the bathroom or pick your nose without your spouse looking —or try to buy them a gift without them knowing. SECRECY is when you feel guilty about something that you can’t tell your spouse.”

— PRIVACY is having some quality time or spiritual time alone. SECRECY in a marriage can be a form of deceit.”

— “PRIVACY is the withholding of info concerning yourself, the disclosure of which would be of no benefit to the partner, and which you don’t wish to share. SECRECY, on the other hand, is the withholding of info that may have an effect on the well being of the partner. This effect may be financial, spiritual, physical, or mental. PRIVACY is acceptable. SECRECY is not.”

Below is another explanation of secrecy written by Jack in the article, Privacy Vs. Secrecy in a Marriage. (Jack had a “secret” affair. Since that time, he has worked to be open, and has changed his ways, which brought healing to his marriage.) Here’s an excerpt of some of what he has learned:

It is the act of keeping things hidden —that which is secret goes beyond merely private into hidden. While secrecy spills into privacy, not all privacy is secrecy. Secrecy stems from deliberately keeping something from others out of fear. Secrets consist of information that has potentially negative impact —emotionally, physically, or financially. The keeper of secrets believes that if they are revealed either accidentally or purposefully, the revelation may cause harm to the secret-keeper and those around him or her.

Some secrets seem small but slowly erode trust. Fear of a spouse’s reaction can cause us to begin to hide something that we purchased or to say that we were at the office when we were with friends. A distance will begin to grow between us, and our spouse, bit by bit… Other secrets can wreak havoc on the very foundation of a relationship. These secrets are actions, beliefs or parts of ourselves that we deliberately keep hidden out of fear of its impact. Affairs, drug and alcohol use, sexual orientation or fetishes are examples of secrets that could have disastrous consequences if discovered. Secrets of this nature erode trust and security and create a chasm that makes it difficult for a couple to feel close and truly connected.

A person who is holding secrets will begin to create a false persona that they will hide behind in order to keep the secret hidden. When secrets of this nature are discovered or revealed they shake the underpinnings of a relationship and create feelings of betrayal, vulnerability and insecurity in one’s partner.

Another Point of View

This explanation of the two is featured on the Affair care web site (at Affaircare.com) in the article, “Privacy Versus Secrecy – There IS a Difference”:

“PRIVACY is when you close the door when you’re getting dressed or going to the bathroom. To go to the dictionary, it’s the state of being free from public attention. But notice that it’s not a matter of ‘being who you’re not’ or in any way lying or hiding things…it’s just modesty. Privacy is a need for solitude and connection with the self. It’s a way in which a person can retain full control of one’s actions and ideas without responding to feedback from someone else…

“SECRECY is when you purposely cover, hide or keep something concealed in order to mislead. Again to go to the dictionary, it’s something that is kept or meant to be kept, unknown or unseen. So for secrecy you are deciding to keep something hidden and purposely cover the real truth… hiding things that one doesn’t want to be seen. Often, this isn’t innocent and the reason for secrecy is to prevent disapproval or conflict. One hides something in order to keep it going, even when one knows that there will be a problem if it is done openly.

Secretly Hiding From the Truth

Again pertaining to this issue of secrecy, here is what Dr Laura Schlessinger writes:

“When there are sad and serious problems in a relationship, secrets are sometimes the means by which, people try to hide from that truth. Instead of facing the problems, getting help, trying to change, or realizing the sick futility of their predicament, people use the glue of secrets to shore up the dam. It ultimately doesn’t work.”

There IS a difference between giving each other space and grace in marriage, and withholding info that affects your partner. Whatever affects your partner should affect you, and visa versa. That’s how God designed marriage to be —“one for all and all for one.”  In marriage, you are told in the Bible to cleave together “as one.” It is troublesome in a marriage to have secret cell phones, usernames and passwords. It’s also problematic when one spouse doesn’t tell the other when he or she meets up, or chats privately with someone else. Secrets are for single people —not for spouses.

In keeping with the vow you made, strive to be as open and upfront with your spouse as it is possible. There should be no room made for secrecy and hiding.

“People who conceal their sins will not prosper, but if they confess and turn from them, they will receive mercy.” (Proverbs 28:13)

May the Lord bless you as you reveal and reflect the love of Christ within your marriage,