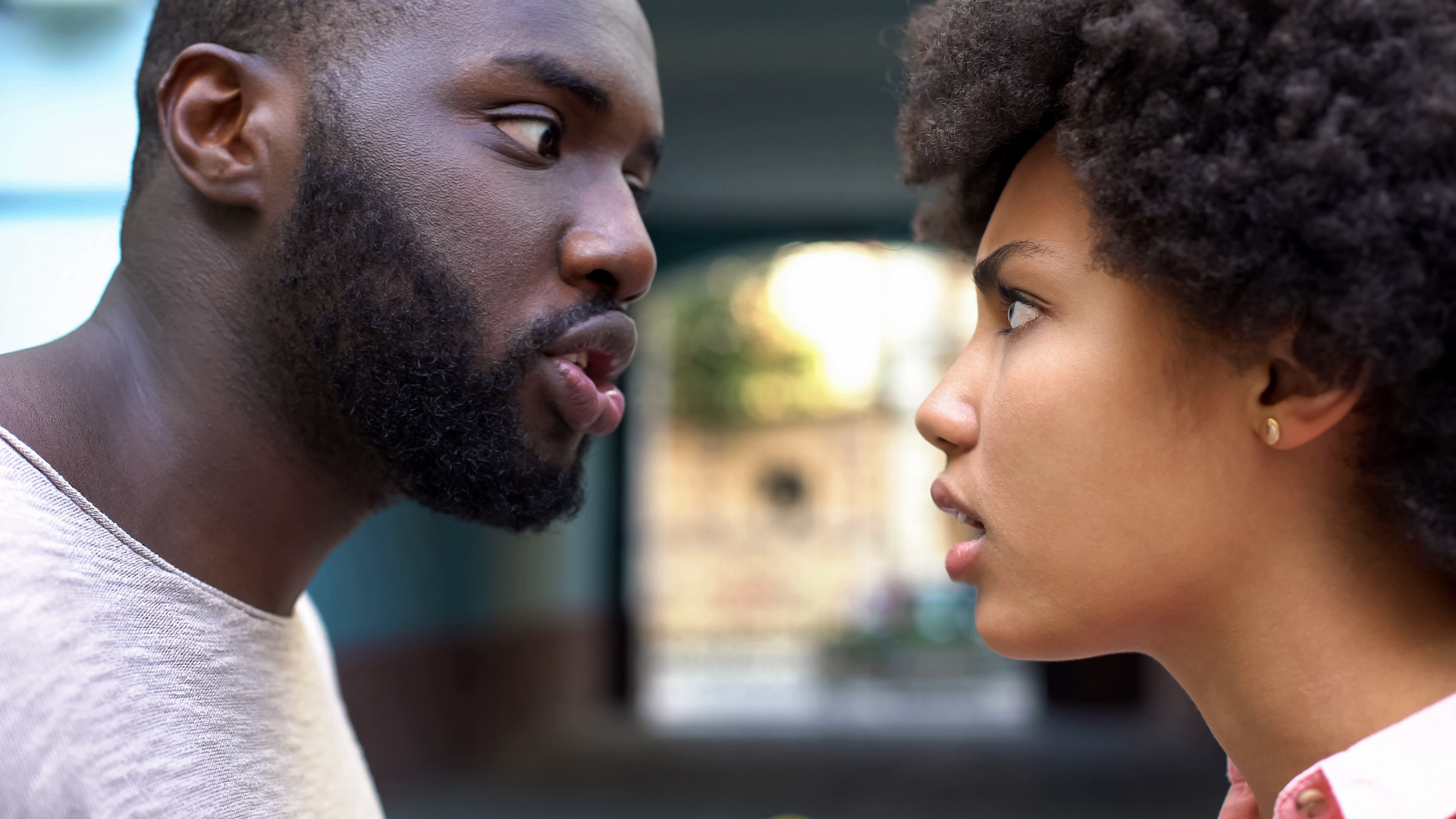 Do you get tired of “revisiting” certain issues with your spouse repeatedly? Yes, us too! We also go through this frustrating situation sometimes. We call them Déjà vu Arguments. It’s the same argument; it’s just repackaged, and keeps popping up repeatedly on different days, weeks or months. But why? Why do some issues keep rising to the top over and over again? We don’t know, exactly. There are probably a million and one reasons why this happens.

“There will be some things that you continuously have to revisit; and it can become exhausting. People can grow very weary; and the longer you have been married, the more tiring and discouraging it can be.”

But think about it:

“…You don’t clean your house one time and then think it’s supposed to stay clean and perfect. We realize that the garbage will keep accumulating. The floors will need to be swept again, and the dust will have to be scared off the furniture. The same is true for your marital relationship. You have to continuously take out the trash, deal with the mess and junk, and revisit issues again. Because we are fallible human beings, living in a fallen world, we can mess up repeatedly; and we just have to be willing to deal with it.

“Wouldn’t it be great if just one discussion with your spouse early in your marriage took care of all the problems and issues that could possibly come along? People live under the delusion that because they have talked about something or tackled it once, that it should be done. But it’s not the way it works. Problems often arise from differences in temperament or just ingrained habits. But honestly, many of the disagreements couples face in marriage have a lot to do with pure selfishness on our parts. And because dying to self is a life-long process, so is dealing with all the stuff that happens in our relationship in the meantime.

“Even the Apostle Paul wrote in 1 Corinthians that ‘he who marries will have trouble in this life.’ Paul knew that being married was fraught with trials. We expect there to be problems in other areas of life like in our jobs, in the church, with our kids; but somehow in marriage we think that there should be a ‘one-time-fix-all’ solution.”

How do we combat these unmet expectations?

“… Don’t grow weary; don’t give up. Readjust your expectations and know that it’s normal. Maybe you ‘can’t do this anymore’ today… but regroup. Take a deep breath; face the issue again, and remember that it doesn’t mean there is something wrong with your marriage because you are arguing about the same thing for the 547th time. Just address the mess; clean it up and enjoy the ‘in the meantime’ until you have to face it again.” (From the article, Same Argument, Different Day“)

When an argument starts to get out of control between you and your spouse, look for ways to defuse the situation until you can come back and work on the problem again in a more sensible, honoring way. Even if you have to revisit the same problem a dozen or more times, commit to working on it —until you can control it together. Don’t allow it to control you and divide your marital partnership.

If you can’t ever seem to reach an agreement over certain issues:

“Don’t fall into the trap of believing that you and your spouse can’t be happy if you can’t resolve your serious disagreements. Ninety percent of problems in a relationship are not solvable. There are things that you and your spouse disagree about and will continue to disagree about. Why can’t you once and for all resolve these issues? Because in order to do so, one of you would have to sacrifice your beliefs. But you can simply agree to disagree and reach ’emotional closure’ even though you haven’t reached closure on the issue.” (Dr Phil McGraw)

And that’s the truth! There are certain issues, for us, that keep rising to the surface over and over again. And yes, it can be irritating. There’s no doubt about it! But we’ve learned to find ways to get past our disagreements and move on a LOT faster. Sometimes we’re eventually able to come to an agreement (even though we’ve disagreed over the issue for many years). But other times we just can’t seem to agree. So, we find “solutions” that we both can live with.

Here’s a silly, but real example for you. We have disagreed over the years over the way Steve brushes his teeth. (I told you it was silly.) It’s messy and grosses me out completely. (Without going into details, I find myself a bit nauseated when I see his brushing “technique.”) Steve doesn’t see it that way. He thinks it’s the right way to brush his teeth; and that’s that! So, we eventually figured out a way to bridge our disagreements over this matter. Simply put, he doesn’t brush his teeth in front of me; and I’m good with that. Afterall, who wants to be nauseated? I give him privacy when he brushes, and all is well. The issue hasn’t gone away—but we’ve found a way to bridge our differences.

We’ve learned to “manage” these types of disagreements, so they don’t cause too much destruction. It’s the old motto of, “Where there’s a will—there’s a way.”

On this issue, Mark Oelze points out something that we have done (and will do again and again, if needed):

“Change your expectation from that of resolving the conflict, to that of managing it. Here’s why: the tendency on all our parts when first facing a conflict is to find a way to resolve it. For some that translates into ignoring it. …For others, it means to barrel their way through to find at least some kind of resolution. If they can talk through it even in a small way, they get back into life assuming it is all taken care of. Within a relatively short amount of time, however, the problem surfaces once again. Then they’re really mad because they thought the problem had been taken care of. Well, it may or may not have been at the time.

“The bigger issue, however, is that because of the nature of the problem, it’s probably one that is perpetual. Once you recognize this, you realize that it is not something you can fully resolve. Instead, it is a problem that you must work together as partners to manage.” (From the article, “Having the Same Fight Over and Over Again?”)

All of this has taken us by surprise in our marriage. We never knew that we would have to deal with perpetual disagreeable problems in our relationship. But we have! And so do most couples.

Concerning this matter, did you know that:

“… All couples have perpetual problems. These issues can seemingly be about the exact same topics as what for another couple might be solvable; however, unlike a solvable problem, these are the problems that a couple will return to over and over and over again.

“… What matters is not solving perpetual problems, but rather the affect with which they are discussed. The goal should be to establish a dialogue about the perpetual problem that communicates acceptance of your [marriage] partner with humor, affection, and even amusement. It’s also to actively cope with the unresolvable problem, rather than allowing it to fall into the condition of gridlock.” (Michael Fulwiler, from the article, Managing Conflict: Solvable VS Resolvable Problems)

And that’s a good goal!

Here’s another tip that might help you to achieve that goal:

“Your goal is to try to stop hurting each other by not having the same arguments without resolution. You can ask yourself, ‘Is there any way to create a win-win solution around this issue or any small part of this issue?’ You will want to be as flexible as possible.” (Lisa Rabinowitz, from her article, “How to Stop Having the Same Relationship Fights Over and Over Again)

Now, you can also ask that same question to your spouse. “Is there any way we can create a win-win solution around this issue or any small part of this issue?”

And then work on something that the Gottman Institute terms as, “building emotional intelligence and developing skills for managing conflict.” Don’t keep fighting like children do. As adults, put intentionality into developing better conflict management skills.

FYI: We have a lot of tools to help you with this in the section for Communication Tools.

As we deal with disagreements between each other—even those pesky ones that keep coming back again and again, keep in mind:

“Disagreements in marriage will come; and that’s okay. It’s not about whether we will fight as a couple—because we will—but how and when we fight that matters. In Mark 3:25, Jesus states, ‘If a house is divided against itself, that house will not be able to stand.’ As a couple, we should seek to work through our conflict in ways and times that serve to unite us.” (Ashleigh Slater)

“The next time you and your spouse get into a tense conversation, you may want to envision Christ standing just beyond your spouse’s shoulder. When you do, remember His words: ‘Truly, I say to you, as you did it to one of the least of these my brothers, you did it to me.” (Matthew 25:40) (Dr. Emerson Eggerichs) “‘And whatever you . . . say, do it as a representative of the Lord Jesus…‘” (Colossians 3:17)

And to that, we say amen, and amen!