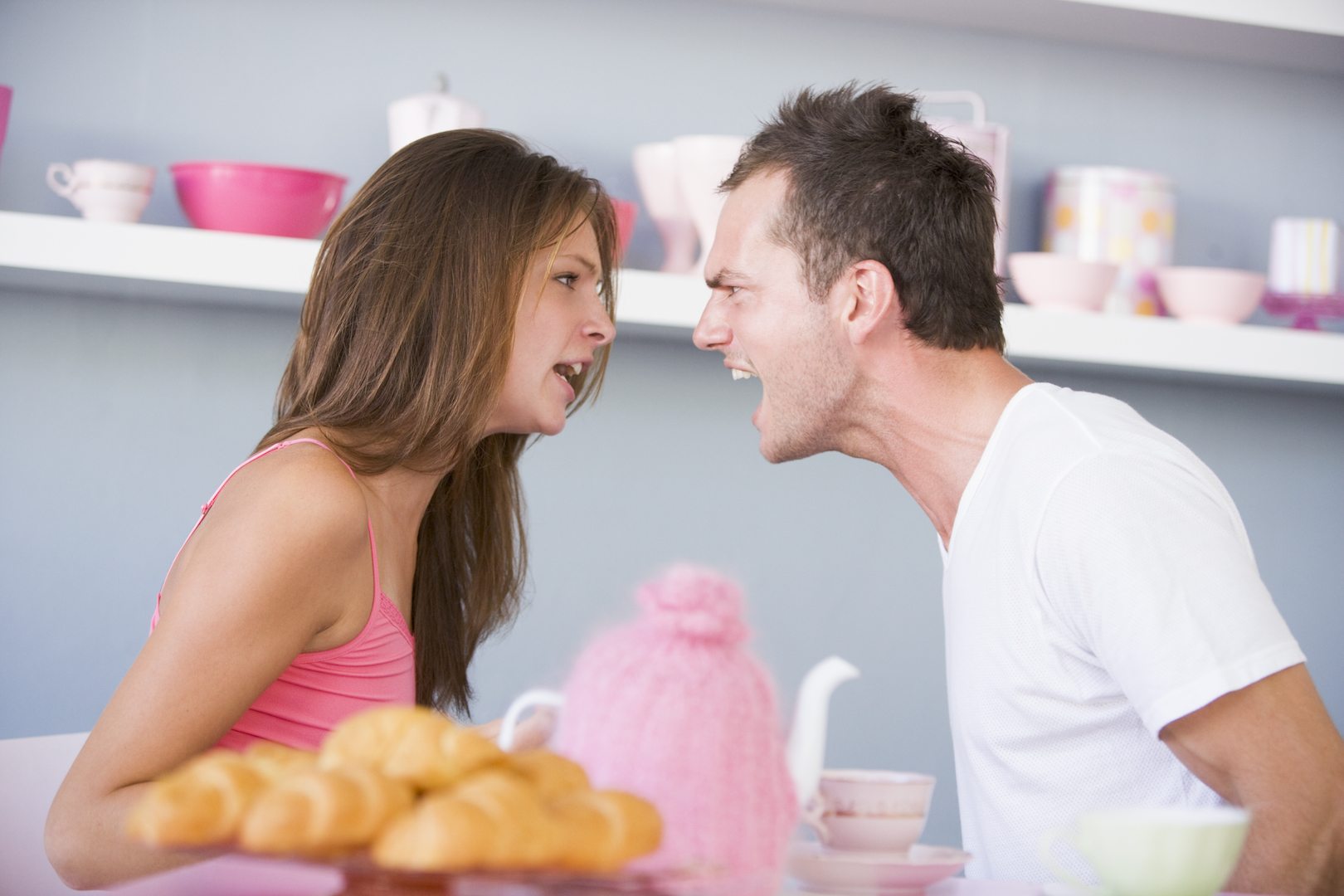 Do you and your spouse fight? And when you do (notice I said when and not if), are you fighting fair with each other?

“How you argue —especially how you end an argument —can determine the long-term success or failure of your relationship. A primary requirement for all fights is to maintain control. You don’t have the license to be childish, abusive or immature. If you have legitimate feelings, you’re entitled to give a reasonable voice to those feelings in a constructive way.” (Dr Phil McGraw)

We agree. So, to help you “give a reasonable voice” to that, which you feel is important to express to your spouse, we’re giving practical advice in this Message. It was given on the Dr Phil (television) Show titled Fighting Fair. Here are Dr. Phil’s specific rules for How to Fight Fair. We are giving a shortened version. You need to visit his web site through the linked title to get more details

• Take it private and keep it private. Fighting in front of your children is nothing short of child abuse. It can and will scar them emotionally.

• Keep it relevant. Don’t bring up old grudges or sore points when they don’t belong in a particular argument. Put boundaries down around the subject matter so a fight doesn’t deteriorate into a free-for-all.

• Keep it real. Deal with what really is at issue, not with a symptom of the problem. Get real about what’s bothering you, or you’ll come away from the exchange even more frustrated.

• Avoid character assassination. Stay focused on the issue, rather than deteriorating to the point of attacking your partner personally. Don’t let the fight degenerate into name-calling.

• Remain task-oriented. Know what you want going into the disagreement.

• Allow for your partner to retreat with dignity. How an argument ends is crucial.

• Be proportional in your intensity. Every single thing you disagree about isn’t an earth-shattering event or issue. …When you fight about everything you’re fighting about nothing.

• There’s a time limit. Arguments should be temporary. So don’t let them get out of hand. Don’t allow the ugliness of an argument to stretch on indefinitely.

What’s important to remember is:

We all bring different perspectives and biases to how we react to marital conflict. There’s not necessarily any one right way to handle and resolve conflict. But, be assured that there are some mindsets, behaviors and attitudes you should avoid in this area of your marriage. (Matthew D. Turvey, from FocusontheFamily.com article, Fighting Fair)

You can see this better, as you read through the following points that were discussed on the Dr Phil Show. We hope they will give you further insight into that which you can apply to your own relationship.

• Robin thinks Glenn expected marriage to be like it was when they were dating. Glenn says it’s her fault (for the problems they’re having). Dr Phil tells them to stop “taking inventory” of each other. They need to start looking inward at their own actions. [Good words of advice for all of us.]

• “What’s your objective when you start calling your wife demeaning names?” Dr Phil asks Glenn. “What is it you hope to accomplish when you do that?” “To get out of the argument, to end it, to finish it,” Glenn says. “How’s that working for you?” asks Dr. Phil. (It wasn’t.)

• Dr Phil asks Glenn to think of how Robin must feel when the man she married, and the father of her child, calls her disgusting names. Glenn says he’s never thought about it before.

• “Have you ever noticed that the stupid things you’re fighting about are the same things over and over? Do you know why? You’ve got to take a subject and see it through to the end,” Dr Phil comments. “The end may be that you agree to disagree. Most things that couples argue about in marriage aren’t resolvable.”

• “So what’s your payoff in this?” asks Dr Phil. “I guess I’m hoping he’ll change and see my side, and say, ‘OK, you’re right,'” says Robin. Dr Phil points out that this strategy isn’t working, and that 7½ years into their marriage, she ought to have figured that out!

• “Something you’re getting out of this makes you come back to this. This is a sick addiction. You’re addicted to yelling and screaming. You wouldn’t do it if there wasn’t a pay-off,” says Dr Phil. “The pay-off you’re getting is that you’re venting frustration,” he adds calling them “arguing addicts.”

• Dr Phil concludes that they aren’t holding themselves up to a high enough standard. “You’re allowing yourselves to get down in the gutter in an immature way and you don’t have the right to do that. You made a commitment to each other, you have a child involved, and you have to overcome the addiction. You’ve got to deny yourself the fix. You can get the same relaxation and release by problem solving instead of frustration venting.”

Dr Phil then goes on to talk to another couple (Mike and Karen). They fight in front of their kids and demeans each other. You’ll need to go to Dr Phil’s web site to read: Fighting Fair to find out what he tells them. (It’s worth the effort!) But we want to share with you one of the things he tells this couple. We’ll then conclude with a closing statement he addresses to both couples. To Mike and Karen he says:

Likewise, Karen needs to do the same. “You don’t have to have your partner actively involved to make huge changes in your relationship,” says Dr Phil. “You’re not a victim. You can stimulate and inspire, but you can’t control and change. So maximize your own involvement.”

• Dr Phil then talks with both couples. He asks them, “At what point did you say ‘there’s no personal standard? I can do anything I want to do. And I don’t have to be responsible. I can just yell, scream, be ugly, and call names.’ At what point did you dip below the level of any personal requirements or standards?”

Dr Phil concludes by saying: “You guys are both in serious jeopardy. What I’m telling you is that there’s a point at which you have to say, ‘I’m going to be a leader in this situation. If he’s going to yell and scream then he’s going to do it by himself. I refuse to participate in this.'” It’s a matter of personal integrity and dignity, explains Dr Phil. So be a good mother, father, wife or husband before worrying about someone else’s behavior.

We agree! We hope this information is helpful for YOUR marriage. Dr Phil has a lot of great information on his web site at DrPhil.com. (This includes additional information given in support of the above mentioned show titled, Fighting Fair.) Be aware though, that it’s not a Christian web site. But as it’s true with any human advisor, it’s best to glean through the material and use only what God shows you to be wise.

On that same note:

CBN.com has some additional information that might help you in your marriage. Their Daily Life Producer Belinda Elliott says the following about disagreements in marriage:

“If there is anything that all marriages have in common, it is conflict… It is how you handle these conflicts when they arise that matters.”

She then goes on to share some practical communication tools given by Dr Steve Stevens, a marriage counselor. You can read through them (and use what will work for your marriage) by clicking into:

Another article you might benefit from reading can be found on the CovenantKeepers.org web site:

• HOW TO FIGHT FAIR

Consider the following scripture as it applies to fighting fair:

“The heart of the discerning acquires knowledge. The ears of the wise seek it out.“ (Proverbs 18:15)

“Listen to advice and accept instruction, and in the end you will be wise.“(Proverbs 19:20)

May God Bless your marriage!
Steve and Cindy Wright