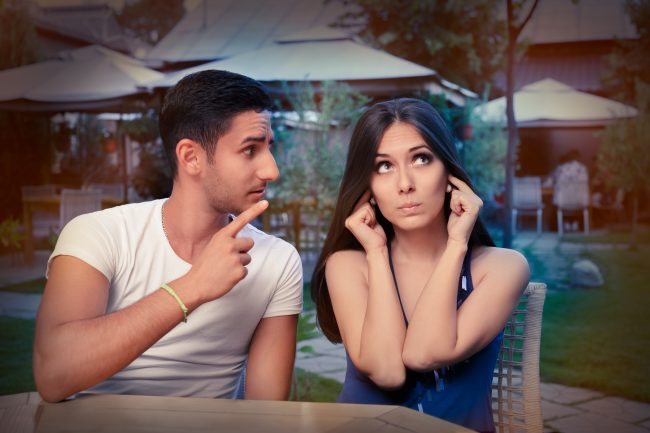 Are you a “right fighter?” When you’re conflicting with your spouse, do you keep fighting about the issue at hand until you feel you’ve made the point clear that you are right and he or she is wrong? It’s that “winner takes all” attitude, making you (think you’re) the winner and your spouse is the loser. It’s also arguing to such a degree that you would much rather prove you are right, than to work on saving the relationship. Perhaps it’s you that does this, or perhaps it’s your spouse that does the “right fighting.”

We’re reminded of the scripture:

“A fool finds no pleasure in understanding but delights in airing his own opinions” (Proverbs 18:2). “Do you see a man wise in his own eyes? There is more hope for a fool than for him.” (Proverbs 26:12).

We can see this in action when “being right” is more important than doing what is right.

“Right fighters only care about being right. Whatever the argument is, as long as they’re right (or think they’re right), they’ll keep the argument going until the other person concedes they’re right. At some point the topic of the argument is lost. All that matters is that their point of view is accepted as the right one. In the end, that’s what they end up fighting for more than anything else.” (From the Families.com article, “Right Fighting”)

We actually heard about this concept when Dr Phil talked about this on his TV show, telling his listeners, the “right-fighter has a goal of conforming all around her/him to an understanding of the one ‘correct’ and ‘only’ perspective in an argument.”

Steve and I used to both be “right fighters.” I admit though, that I was more of one than he was because I could go on and on in arguing. I can more readily convey my thoughts faster than Steve. (He is more gifted in other areas of life, but not as much in conveying his points as quickly when there is conflict happening.) As a result of this, I would run right over Steve verbally. Eventually he would just give up because of his frustration just to make it all stop. Sadly, because of this, he often didn’t feel heard or validated. This is not a point I’m proud to confess. And I would feel the same way, when Steve got caught up in right fighting.

What we didn’t realize is something that Dr John Grey often points out: “’winning’” at the other’s expense is a net loss for the relationship.” And it is. It sure was for us, until we both woke up to the destruction we were causing in our relationship when we would get caught up into “right fighting.”

With many tough times behind us, we (especially I) have been learning to slow things down and look at the total picture —that God would have us, rather than just our shortsighted reasoning.

Resolving conflict within the marriage is more about talking AND listening, rather than talking AT each other to the bitter end —without doing much listening (with “bitter” being the operative word). Just because one partner can out-argue or talk faster than the other (until he or she is confused), that doesn’t mean the quieter one in conveying his or her thoughts is “wrong” and the other is “right.” As a matter of fact, we explain this a bit more in the following Marriage Message:

The point is, that right fighting, as writer and family counselor Agnes Vrieze writes, can be “crazy-making.” She goes on to say,

“Before you know it you’re pulled into something that feels like a competition. The philosophy of a right-fighter is ‘in order for me to be right, you need to be wrong.‘ There is energy, a heat that comes out… after all, it’s a fight and someone has to win. In their [or your] case, it always has to be them [or you].” (From her blog article, “Dealing with a Right Fighter”)

Is There Really a Winner?

I’m wondering though, how is it worth it to feel like a winner who told “my spouse a thing or two” when in order to do so, I have to make my spouse into a loser? As I take a step back, I have to admit something is messed up in this thinking. It can cause a lot of harm to our spouse’s feelings. Writer and counselor Gary Oliver wrote about what he learned on this matter (in the book, “Mad About Us”) saying,

“Early in our marriage I learned that I could be right, but go about being right in a wrong or an unhealthy way. In the intensity of an emotional discussion it’s easy to say things or do things or express ourselves in a tone of voice that discounts and wounds our partner. Over the next few years I discovered that there were some things I needed to apologize for. My intentions had been good, but my words had wounded the person I loved the most.”

Matthew L. Jacobson makes a great point on this in his web site article, “Just because You’re Right …Doesn’t Mean You’re Not Destroying Your Marriage.” (We recommend you read his whole article —it’s great!) Here’s a portion of what he wrote:

“Do you truly care about the truth of what you were discussing with your husband or wife … or is it really about winning —about being the victor, again? Are you sure pressing your advantage wasn’t more about pride than what was best for your relationship? You don’t have to guess. In Proverbs 13:10 says, contention comes from pride.

“You’re not experiencing contention with your spouse because ‘truth’ is on the line. It’s happening because you are both prideful.

“Being right and being prideful are often two ends of the same stick we use to bludgeon our way to winning. The ‘truth’ can be very deceiving as we convince ourselves it’s the most vital element in any argument. But, it’s important to be correct, isn’t it? Yes, it is. But when it comes to disagreements in marriage, there is something that trumps truth and arguing your spouse into the corner.

“That’s right, sometimes emphasizing how right we are is far less important than how much we value our spouse. Beating him/her with the club of correctness won’t get the job done. It will, however, get a job done. It will beat us apart from one another. Is that what you want? Being right …and alone …separated emotionally (and often physically) from the person you pledged your life to?”

Instead of fighting to the point of pushing us farther apart, isn’t marriage supposed to be a lifetime commitment of “marrying” lifestyles and ideas so that TOGETHER (as well as individually) you put a stronger foot forward as you step into the future? Isn’t it about the principle of “we won’t always think alike, but we are committed to ‘think together’ as marriage partners?”

If you’re a right fighter, and/or your spouse is one, here are a few suggestions. They are gleaned from various resources concerning how to better work through conflict, rather than dysfunctionally right fighting:

“This habit does NOT have to define you. You are capable of releasing this habit at any time Action Step: …Begin to imagine what conflict would be like if the outcome was not important. Begin to allow others to hold one opinion and you another without having ill or hurt feelings. What would life be like to be loved, cared for and respected rather than being ‘right’? Try validating others’ opinions as equally valuable. This doesn’t mean you must agree, only to say ‘yes’ you and your view are as valuable as mine.” (From the familyresource.com article, “Are You a Right Fighter”)

“The old saying is that nothing is as certain as death or taxes. Conflict in marriage is. But we can choose to fight to the bitter end or to a BETTER end. The ability to resolve conflict is an essential ingredient of a healthy marriage.” (Gary Inrig) Choose your battles wisely, and learn when it’s important to work it through, and when it’s important to just let it go.

“Identify the right-fighter and don’t engage… When looped in, stop… It’s not necessary to keep discussing because it will only become a competition or fight.

“Everyone has his or her own unique perspective of the same situation. Respect that they see it from their particular view and experience. This doesn’t make it truth…

“Review your own opinion for possible places to change or adapt your particular position. Staying humble… be willing to look at all sides of the discussion.”

“Be consistent. Use your ‘I feel’ words. Express what YOU feel and ask what he [she] feels in the heat of the moment…” This “lets him [or her] know that you are showing your feelings and also concerned about his [or hers]. It also shows that you value his [or her] opinion.” (From the self growth.com article, “Fighting Right VS Right Fighting”)

—I don’t know who wrote the linked article below but it contains things to prayerfully consider on this issue. This includes additional points that address the question: “How Does One Break the Habit Of Right-Fighting?”

Remember, as it Pertains to Right Fighting:

Sometimes proving to your spouse that your way is the “right” way can cause a death in your relationship.

When in conflict, Stop, Look, Listen and THEN Proceed to work towards the goal of resolving the conflict. Make sure you do it in a way that leads where eventually both of you are satisfied.

5 responses to “Right Fighting in Marriage”