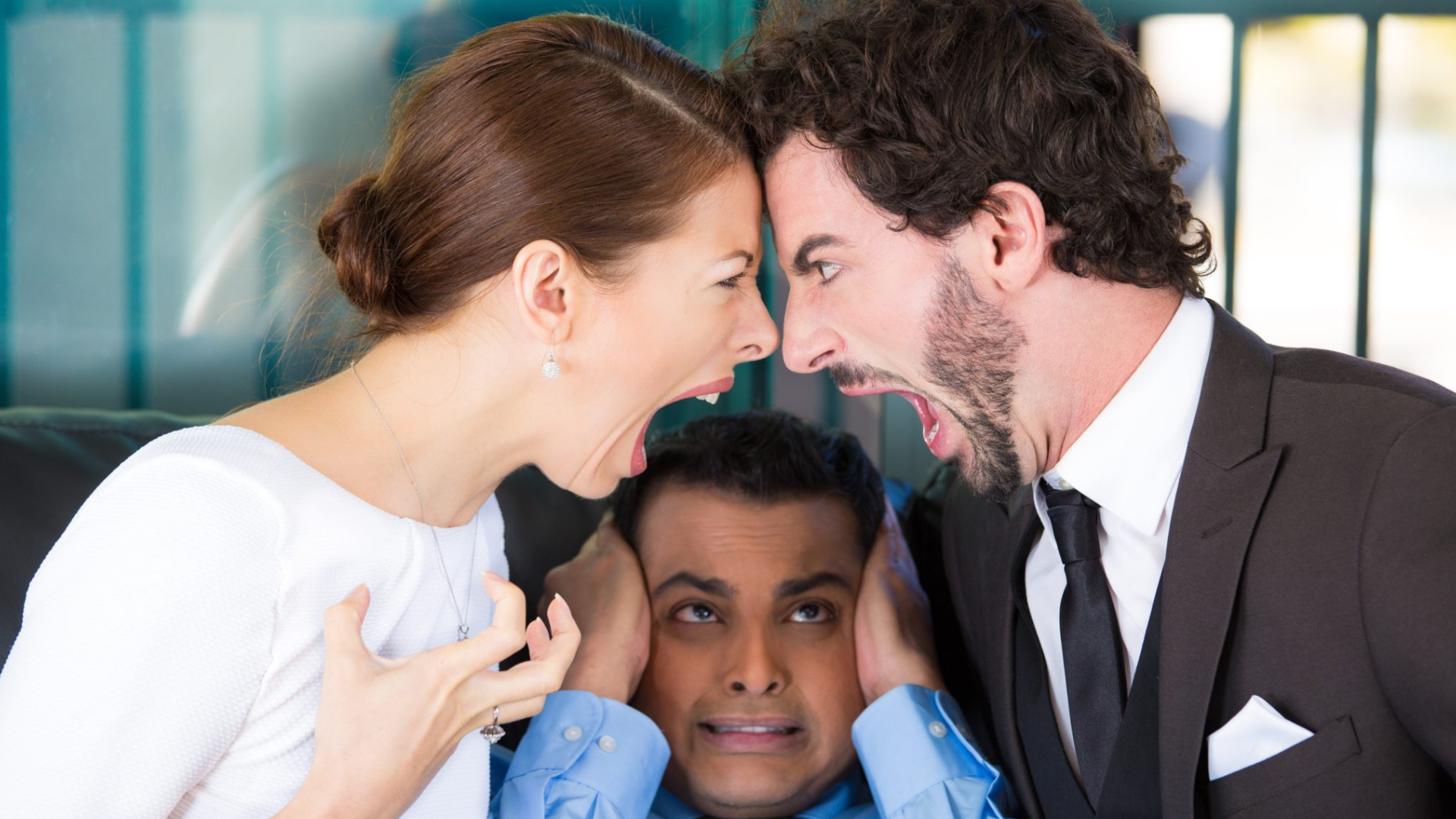 Have you ever been with a married couple that argues with each other while you’re with them? As the arguing progresses, how do you feel? Awkward? Embarrassed? Closed in? Uncomfortable? Yes …we feel that way too. We know many others who feel that same awkwardness about spouses arguing in front of them.

It is like these arguing couples have blinders on that erase anyone else who is around them. They just argue away, no matter who’s there. If children, other family members, friends, or even if strangers are with them, they still argue. It’s as if no one else matters. That’s because it becomes all about what concerns THEM at that present moment!

We talked with a couple whose adult “child” and spouse often put them in this situation. This young couple thinks nothing of breaking out into full-blown arguments with each other when their parents are with them. The parents have expressed to them their feelings of awkwardness and embarrassment. They’ve asked them to take their disagreements into private places. And yet nothing has changed. This young couple is convinced that it’s “healthy” to air out their differences like this. For this reason, they continue to expose their parents and others to their arguing tirades.

But it isn’t healthy or mature to do this. And it isn’t considerate to the others in the room when spouses can’t settle their differences privately. My dad and step mom sometimes put us in this place. Several times we were in the car with them on long trips when they would argue. We felt like we were trapped in a cage—and essentially we were. We were VERY uncomfortable the whole time. I even joked with them one time saying, “Don’t let me come up there and break you two apart.” And yet they didn’t skip a beat. They just kept fighting as if we weren’t even there.

It was bad enough when they did this in our home or theirs. But it was even worse to be trapped in a car with them when we couldn’t walk away. We finally made the rule that we wouldn’t ride in a car with the both of them. They didn’t like it; but we didn’t care. It was better for us to drive separately in a peaceful vehicle than to allow them to expose us to that type of toxic behavior.

“Escaping” Spouses Arguing in Front of Them

One couple we read about became so desperate to get away from friends when they would argue in front of them that they “developed a secret sign.” The author wrote, “One of us removes his or her watch and re-buckles it —so we know when it is time to go.” How sad is that to have to come up with a “secret sign” so they could get away? We’re reminded of the scripture in Philippians 2:3-4. We’re told:

“Do nothing out of selfish ambition or vain conceit, but in humility consider others better than yourself. Each of you should look not only to your own interests, but also to the interests of others.“

We’re wondering… how are we looking out for the “interests of others” when we expose them to our arguments? It’s just plain rude to put them in the middle of this situation. That’s why we’re encouraging you to be kind. Take your arguments with each other elsewhere.

We can’t say it any plainer than this. Be considerate. Please don’t subject others to your fights. Look beyond your angry situation and S.T.O.P. = See The Other People who are around you. Go elsewhere to settle your disagreements. We’re told in the Bible, “There is a time for everything, and a season for every activity under heaven.“ And this includes a time to openly conflict with each other as husband and wife. It also includes a time when it’s best to NOT openly disagree with each other.

Also, S.T.O.P. = See The Other People and be considerate of EACH OTHER. As author James Bardot says:

“Keep it private. Nobody wants their dirty laundry aired in front of others, and violating this rule becomes especially painful when our private affairs (and faults) are exposed by someone we love.”

So, not only do OTHER people NOT want to be part of your arguments with each other, you shouldn’t expose your spouse to this invasion of privacy. It shows that you aren’t valuing your spouse as a marriage partner. Even if he or she is the one who initiates the argument in front of others, do what you can to get out of it.

When it comes to spouses arguing, we agree with the advice that author Cherie Barboch gives:

Consider the time and the place. While it can be difficult to hold your fury when you first realize you’ve been wronged, wait until you and your partner are alone in a quiet place and space. If your partner is busy at work, out with friends, or in the midst of a family visit, wait until he or she can speak with you one on one [alone]. (From an article titled, “Fighting Fair”)

On this issue, Gerald Foley, from the article “Courage to Love When Marriage Hurts” wrote:

Do not involve other people. The argument is between the two of you. Young couples make the mistake of involving friends or parents. The damage comes later in several forms:

• A parent will more likely remember the issue long after a couple has forgotten.
• The respect and perception once held by a parent for a child’s spouse will decline.
• A couple may feel uncomfortable facing the parent even after an incident has been resolved.
• A parent’s natural reaction is to protect a child and this reaction may cause further damage to the relationship.

When it comes to spouses arguing, those are good reasons all on their own to keep it private. But here’s something else to consider:

It is important that the fight take place between those directly involved and that neither party elicits the help of friends or family members to validate their position. It doesn’t matter how many other people agree with you, that doesn’t necessarily make you right, so don’t involve others in your fight.

This is not only fair to your partner but it is also not fair to those who are dragged into the argument. While you may have many people who agree with you and believe you are right, bringing them into the fight just isn’t fair. And it also isn’t effective. (From an article titled, “How to Fight Fairly”)

The exception to this rule is when you are seeing a counselor or mentor(s) who are trying to help you with your issues. But this is an arranged time together; so it’s different. Sometimes a third party can be more objective. As a result, they can offer you good counsel or advice on how to work through your disagreements in a healthier way. But make sure the counselor isn’t someone who is more partial towards one spouse above the other.

This is especially true if you are in an abusive situation. You may need to talk to others about these matters. Abuse grows more insidious in the dark. But be careful of who you talk to. You can find tips to help you in this type of situation in the Abuse in Marriage topic.

As far as “normal” fighting, the best advice is given in the Bible. It states in Ephesians 4:29:

Do not let any unwholesome talk come out of your mouths, but only what is helpful for building others up according to their needs, that it may benefit those who listen.

In Proverbs 18:2 we’re told, “A fool finds no pleasure in understanding but delights in airing his own opinions.” And Titus 3:2 it is stated, “Remind the people to slander no one, to be peaceable and considerate, and to show true humility toward all men.” These are good guidelines for us all!

In closing, we remind you to look beyond your angry situation. S.T.O.P Arguing … See The Other People who are around you when you and your spouse are arguing. Be considerate of them, AND each other. It’s important to go elsewhere to settle your tense disagreements. Ultimately, this will benefit ALL who are concerned.

We give a lot of practical tips to help you grow your marriage in this issue of spouses arguing and others in our book, 7 ESSENTIALS to Grow Your Marriage. We hope you will pick up a copy for yourself. (It’s available both electronically and in print form.) Plus, it can make a great gift for someone else so you can invest in their marriage. And who doesn’t need that? Just click on the linked title or the “Now Available” picture below to do so:

4 responses to “Spouses Arguing in Front of Others”