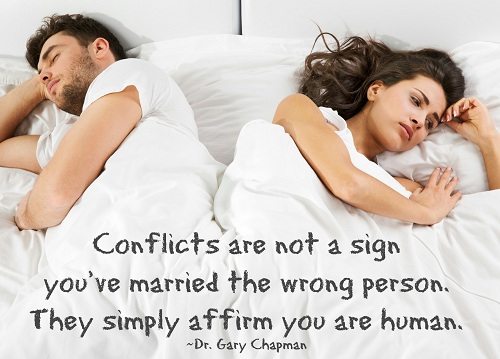 Thomas Whitman and Thomas Bartlett, in their book, “The Marriage Mender,” talk about conflict, and healthy fighting habits:

Thoughts on Conflict that is Healthy

So, to help you handle conflict in a better and healthier way, the following are some thoughts written by Heather Long, from the article, “Fighting with Your Spouse.” Below each tip, we have added scriptures. Heather writes:

“The words healthy and conflict seem contrary in meaning, but the truth is—conflict can help a couple’s relationship to grow. The conflict we have with others spurs growth in us. Yes, conflict can be unhealthy if we allow it to be destructive—but conflict can be constructive too. …Here are a few key tips to keep in mind in order to preserve the healthy conflict and not let it get out of control.”

“The heart of the righteous weighs its answers, but the mouth of the wicked gushes evil.” (Proverbs 13:28)

“If you keep on biting and devouring each other, watch out or you will be destroyed by each other.” (Galatians 5:15)

“The quiet words of the wise are more to be heeded than the shouts of a ruler of fools.” (Ecclesiastes 9:17)

“Whatever happens, conduct yourselves in a manner worthy of the gospel of Christ…” (Philippians 1:27)

Important Scriptures that Make This Point:

“A gentle answer turns away wrath. But a harsh word stirs up anger.” (Proverbs 15:1)

“Let us therefore make every effort to do what leads to peace and to mutual edification.” (Romans 14:19)

Important Scripture that Makes This Point:

“He who guards his mouth and his tongue keeps himself from calamity.” (Proverbs 21:23)

“A fool gives full vent to his anger. But a wise man keeps himself under control.” (Proverbs 29:11)

“A patient man has great understanding. But a quick-tempered man displays folly.” (Proverbs 14:29)

“He who answers before listening —that is his folly and his shame.“ (Proverbs 18:13)