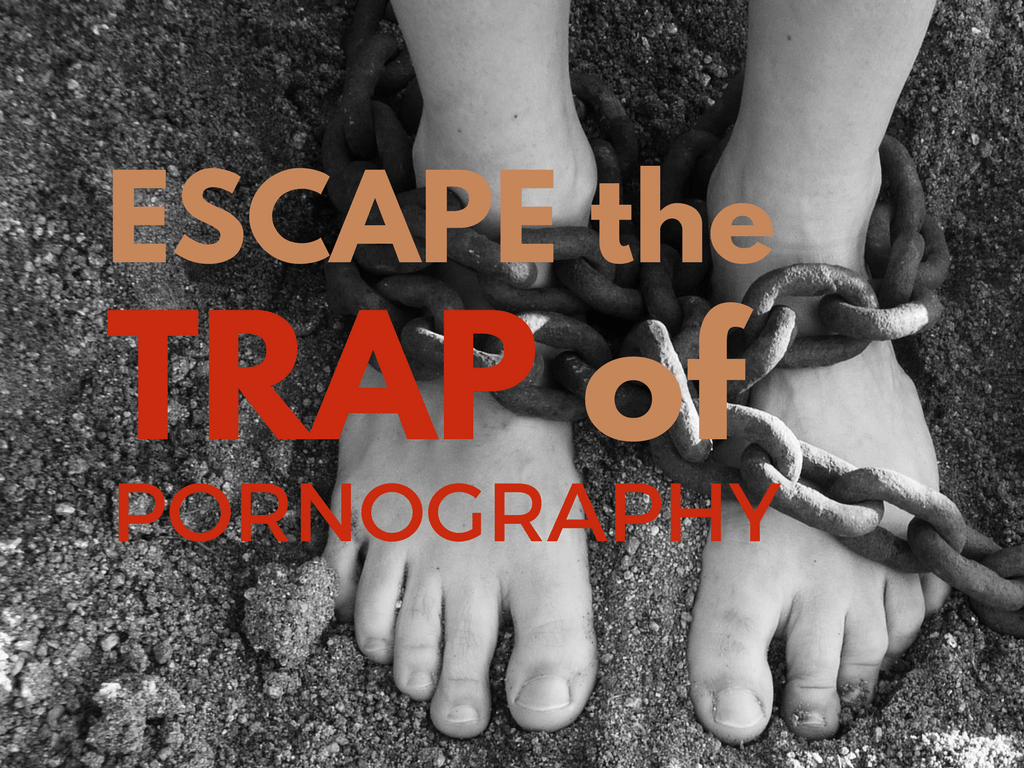 We hear from so many people who are frustrated and also who feel disgusted with themselves. They just can’t seem to break free and escape the trap of pornography. There is a continual pull that draws them to it, and somehow they fall into it’s clutches, time after time. As a result, they feel chained and imprisoned by that, which they know they should not do.

They ask the question, “how can I escape it?” … “How can I stop doing what I don’t want to do?” Do you feel that way?

Escape the Trap of Pornography

The Apostle Paul eventually recognized that it was the “law of sin at work within my members. What a wretched man I am! Who will rescue me from this body of death? Thanks be to God —through Jesus Christ our Lord!”

There is victory in Christ as we grab onto Him to help us gain victory over that which He has already conquered. Keep in mind that:

To help you to escape the trap of pornography —the vehicle, which the enemy of our faith is using to discourage you, we would encourage you to read several articles posted on different web sites.

First, the following Family Life article explains the steps you need to take to escape the trap that you have fallen into. We encourage you to read:

In this next article, Gary Thomas addresses this subject, as it pertains to men who are single. But whether you are single or married, we believe you will gain insights from reading:

Steve Arterburn understands a lot about being caught up in sexual sin. He’s been there and has done that. For that reason, you can learn from the things Steve has had to struggle through. (Steve is a psychologist who counsels many people in this area of life.) Please read the following Marriagetrac.com and CBN.com articles:

• HEALING A MARRIAGE PLAGUED BY PORNOGRAPHY

You have to change your environment so you are not exposed to the temptation, which grabs at you. Don’t believe the lie that you can overcome temptation when you don’t do what it takes to flee from its grasp. This sin affects every area of your life, especially your walk with Christ and the integrity of your life with your spouse. DO something about it. Don’t just THINK you can escape by doing things the way you have. It hasn’t worked so far, and won’t work in the future. You are fooling yourself to think otherwise. You have to change the points of temptation.

It’s like what Steve Gallagher writes. Steve is the Founder and President of Pure Life Ministries. He has dedicated his life to helping men find freedom from sexual sin and leading Christians into the abundant life in God that comes through deep repentance.

He gives the illustration:

“A man breaks a bone in his ankle. He knows that if he goes to the emergency room, the attending physician will have to wrench his foot in order to reset the bone. The thought of this terrifies him, so he ignores the problem, even though every step brings wincing pain. Because of his unwillingness to face a moment of greater pain in the doctor’s office, he must live the remainder of his life as a cripple.

“My dear brother, God wants to cleanse you, free you and use you for His Kingdom. Will you spend the rest of your life buried by this sin, unwilling to do the difficult thing? … In your case, it is not a foot that must be wrenched; it is your self-life.” (From the article, Pastor, Are You Trapped in Pornography?)

To Escape the Trap of Pornography:

• Use an online accountability filter.

• Don’t allow the use of Facebook without having accountability in place.

• If your antivirus/firewall software does not protect against spyware, run an anti-spyware program tool (like AdAware or Spybot).

We pray you find this advice helpful. Please follow through and do what you know you should, as outlined within these linked articles. Apply what you have learned.

If you have additional tips you can share to help others, please “Join the Discussion” by adding your comment below.

8 responses to “How Do I Escape The Trap Of Pornography?”