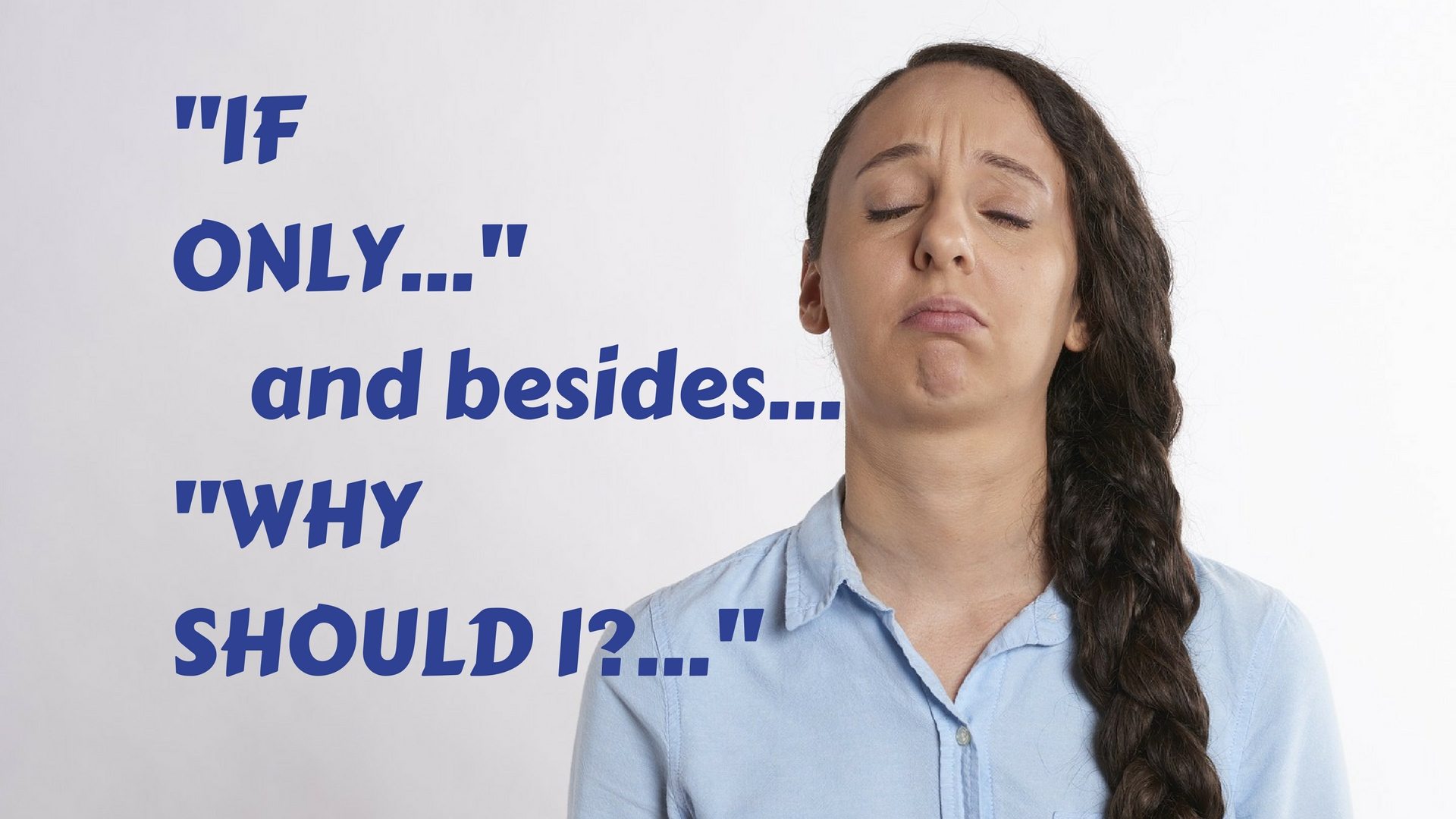 “Not that I have already obtained all this, or have already been made perfect, but I press on to take hold of that for which Christ Jesus took hold of me. I do not consider myself yet to have taken hold of it. But one thing I do: Forgetting what is behind, I press on toward the goal to win the prize for which God has called us heavenward in Christ Jesus. All of us who are mature should take such a view of things…” (Philippians 3:12-15)

Looking Back Too Much Can Kill Marriages

It’s not that we aren’t to ever look back. But we are not supposed to live our lives staring into the rear view mirror. This is because it will hold us back from doing all that which we SHOULD do today.

So there are the “if only’s”, but also the “Why should I’s” that can cause problems. Steve and I hear them (and have even said them) quite regularly. “WHY SHOULD I be decent and civil to my spouse when he/she isn’t?” Frankly, it’s because the Bible tells us:

“Get rid of all bitterness, rage and anger, brawling and slander, along with every form of malice. Be kind and compassionate to one another, forgiving each other just as in Christ Jesus, God forgave you.” (Ephesians 4:31-32)

It is written, “If it is possible, as far as it depends on you, live at peace with everyone” (Romans 12:18). And how about what we’re told in 2 Timothy 2:23, “Don’t have anything to do with foolish and stupid arguments because you know they produce quarrels.”

We can get angry and say, “WHY SHOULD I speak nice to my spouse when all I get is insults?” What is God’s answer?

“Do not repay evil with evil or insult with insult, but with blessing, because to this you were called so that you may inherit a blessing.” (1 Peter 3:9) “Do not let any unwholesome talk come out of your mouths, but only what is helpful for building others up according to their needs that it may benefit those who listen. And do not grieve the Holy Spirit of God, with whom you were seated for the day of redemption.” (Ephesians 4:29-30)

Some Imaginations Can Kill Marriages

So you ask, “WHY SHOULD I?” Ultimately, it’s because He says, “I told you so, that’s why.” Just look throughout the Bible, you’ll see a whole lot more reasons than we can give you here.

We often hear wives say, “WHY SHOULD I treat Him with respect when He doesn’t act worthy of it?” The answer is, it’s NOT because HE’S worthy of respect that you do it. It’s because GOD has His reasons and HE says so. You can see that in Ephesians 5 and 1 Peter 3, where He makes it clear. It doesn’t say, “as long as he acts worthy of respect, then treat him with respect. Otherwise, treat him as you like!” You’re doing this “as unto the Lord” —and for that reason alone.

And men, if you like throwing those portions of the Bible around to justify your own bad behavior… you’re wrong. You have even MORE responsibility in all of this to show love to your wife. This is something you’re told in Ephesians 5 and 1 Peter 3 and other places in the Bible. God holds you responsible for loving your wife “as Christ loved the church and gave himself up for her.” You are to be presenting her to God “without stain or wrinkle or any other blemish.” The question arises, “How can you do that when you’re bruising her heart by acting in an unloving, emotionally disconnected manner?”

The question a man might come up with (and some women as well), is, “WHY SHOULD I show her/him everything that’s on my social devices? Can’t I have any privacy?” No, you gave that up when you married. 1 Corinthians 7 makes that pretty clear. Read it. If you wanted “to be free” to do what you want to do without having to consider what a spouse would say, then you shouldn’t have gotten married.

And then we can go back to the whole “If only’s”. However, it’s written in James 5:12, “Let your ‘yes’ be yes and your ‘no’ be no, or you will be condemned.” Don’t promise something you can’t live up to and will eventually try to escape. “It is a trap for a man to dedicate something rashly and only later consider his vows.” (Proverbs 20:25)

We also hear from people who talk of God “not wanting” them to suffer as they are in their marriage. So they rationalize hopping from one marriage into another one, dragging their kids along. They talk of God’s love and grace and such. And that is true. God does extend grace. But as you read Romans 6, you’ll see this is not what God wants from us. We’re taking advantage of His amazing grace when we treat His precepts, laws, and desires for us so lightly.

We see this all around us, even on the Marriage Missions web site where we have well over a thousand articles posted (and more being added regularly) to help our readers. Each article allows comments and encouragements from those that read and write. It’s an amazing platform where people from every nation are ministering to one another.

But it’s also a platform, like a hospital, where those who need help seek it there. Not everyone’s questions are answered or problems are solved, but we see God working in amazing ways through that which people write. And yet, it’s also evident that there is a lot of infidelity and rationalizing hurtful behavior that is being written about. So those of you, who can, pray about coming onto the web site and praying with and encouraging those who are hurting.

The reason I write this is because we’ve received comments from those who are not Christians. They say that our “mission” is failing. They say that it’s obvious that Christians are just as messed up as those without Christ. This is because of what they read on our web site. They don’t see God’s grace in action as much as they see the failure of Christians to live out what they say they believe. How sad! It’s sad that they don’t see the sick being ministered to, and the love of Christ being lived out.

It’s also a sad testimony that many of our lives and our marriages are as sick or sicker than those who don’t personally know Christ! How this must break God’s heart! Yes, He extends grace. But it hurts His heart and His Kingdom work in other ways to do so. What amazing grace!

Consider Your Why Should I’s

We hope what is written above will help you to consider your own “If only’s” and the “Why SHOULD I’s.” Look at them as something that the enemy of our faith may be feeding us to hurt us. Marriage is not all about us. As Emerson Eggerichs points out, “Your marriage is a tool and a test to deepen your love and reverence, trust, and obedience for Jesus Christ.” It’s a living testimony designed to point others TO the love of Christ.

We conclude by passing along to you something one of our subscribers, Alan Cook, wrote to us. We pray it will give you food for thought this week. He wrote:

“I once gave a talk to a group of men about marriage being the most important missionary work we could ever do. For what does it help that we feed the poor, evangelize the world and yet we lose our most important calling and mission —our own sacred marriage?”

We encourage you to pray about it.
Cindy and Steve Wright