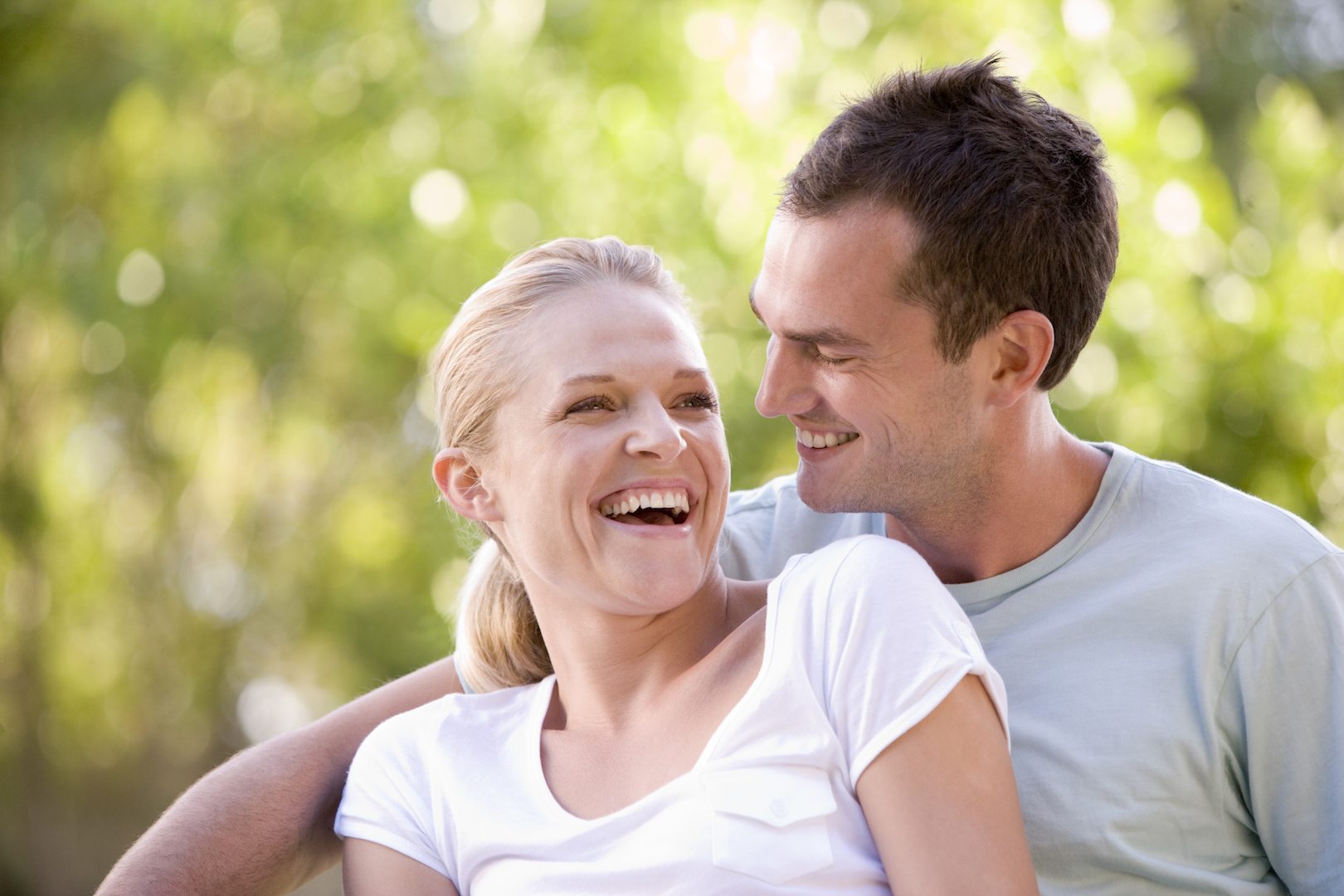 Cindy and I (Steve) thought we’d keep things in this Marriage Insight a little lighter. If you’ve been a regular reader of our Marriage Insights over the years you know that we both enjoy humor. We’re always looking for ways to infuse a few laughs into our marriage. Laughter really IS good medicine! The Bible states this, and we’ve seen that our marriage relationship needs it. There’s no doubt that it draws us closer together.

But we also believe in balance. And so we are always looking for good tips that can help us grow closer in our understanding of each other. So, with that in mind here’s a marriage tip and then we’ll give you a few jokes for a few laughs. We hope you enjoy them.

FYI: We now are making this info available in Podcast form. To listen, instead of reading this Marriage Insight, just click on the Podcast button to the right. →

The Tip Before The Laughs

The marriage tip we’re highlighting comes from the ministry of Mark Gungor (Laughyourway.com), who has a great marriage ministry. Check out his web site if you can. He’s got great content there. Here is his “Better Marriage Tip” for husbands. We’re using this one in honor of our wives:

“Gentlemen, let me have your attention! I am about to give you the single most sought after pearl of wisdom that men have craved since God made a woman out of Adam’s ribs. I’m going to tell you what a woman really wants. This is particularly significant because most women don’t even know what they want. They know they want something, but most have no idea exactly what that something is. Women sense an inner longing, an inner need. They may not know how to articulate it, but they feel it desperately.

“What a woman wants —what she is longing for in her deepest heart of hearts is simply this: she wants to be chosen. For a woman, the whole of life is like a junior high-school dance where she stands alone thinking to herself ‘I want to dance.’ But what she really means is ‘I want somebody to choose me.'”

So our question to you men is:

“Do you show your wife in big and small ways… in spoken as well as unspoken ways by how you treat her, that you choose her and that you love her?”

And ladies: this same challenge goes out to you. You aren’t the only ones that want to feel chosen. Husbands want to know that despite the way they do this or they don’t do that, despite their faults and all you have that is tugging at you (including children), you choose them.

Look for ways to show your spouse that you choose him or her above all others. Even if you don’t think he or she deserves it because of negative things that are happening in your marriage right now, show your love “as unto the Lord.” Be God’s colleague in loving your spouse all year round. It might surprise you that as you do this, some marriage problems might just disappear!

And now for the lighter side! The following are some of our favorites that come from various sources. If we don’t give an attribution, we aren’t sure where we got them. Some of them were sent to us. And others we read (somewhere, but aren’t sure where). But they tickled our funny-bones, and we hope they will tickle yours. Here are a few short ones, to start:

• My wife asked me if I thought she looked fat in her new dress. Pointing to what I was wearing, I replied, “Do I look stupid in this shirt?” (Brian Rice)

• If a man stands in a forest, and there are no women around to hear what he says, is he still wrong? (Joey O’Connor)

• Marriage has no guarantees. If that’s what you’re looking for, go live with a car battery. (Erma Bombeck)

• In the natural childbirth classes my wife and I took, the birthing process was represented by a hand puppet being pushed through a sock. So at the actual birth, I was shocked to see all this blood. The thing I had actually prepared myself for was a lot of lint. (Steve Scrovan)

• Suspecting he had a serious medical condition, I nagged my husband until he agreed to see a doctor. Once there, he was handed a mountain of forms to fill out. Next to “Reason for visit” he wrote, “My wife made me.” (Susan Hutton)

We men try real hard to read our wives mind trying to figure out what you want. But it usually ends up just like this. It’s titled, “To Be Six Again.” And it came from Jokesclean.com.

“You really have to give this guy an A+ for effort. …George was a thoughtful husband. He wanted to give his wife something special for her birthday, which was coming up soon. As he sat on the edge of the bed, he watched his wife turning back and forth looking at herself in the mirror. ‘Reta,’ he said, ‘What would you like for your birthday?’ His wife continued to look at herself and said, ‘I’d like to be six again.’

“George knew just what to do. On the big day, he got up early. He made his wife a bowl of Fruit Loops (a sugared cereal). Then he took her to an amusement park where they rode all the rides. Five hours later, Reta’s stomach felt upside down and her head was reeling. Never-the-less, George took her to McDonald’s. He bought her a (children’s) Happy meal with extra fries and a chocolate shake. Next, it was a movie and popcorn, soda and her favorite candy.

“As Reta waddled into the house that evening and flopped on the bed, George asked her, ‘Well, Dear, what was it like to be six again?’ Reta looked up at him. Her expression changed. She said, ‘I meant my dress size!’”

We’ll put in a disclaimer first. The examples below are generalized. We realize there are exceptions to what is cited. We get that. So, don’t get hung up on specifics that may be different from the way it is in your marriage. Even if you laugh because it hurts, hopefully the Bible verse will apply, “Laughter is as good medicine.” The following also comes from Jokesclean.com:

Differences Between Men and Women

BATHROOMS: A man has five items in his bathroom: a toothbrush, razor, shaving cream, a bar of soap, and a towel [from a favorite hotel]. … The average number of items in a woman’s bathroom is 328. The average man would not be able to identify most of them.

ARGUMENTS: Women always have the last word in an argument. Anything a man adds after that is the beginning of a new argument.

Plus, here’s a few more differences:

DRESSING UP: A woman will dress up when she goes shopping, empties the garbage, answers the phone, waters the plants, gets the mail and reads a book. … A man will dress up for weddings and funerals. (Editors note: Only if absolutely forced to. Most will think their Hawaiian shirt and shorts are just fine for either occasion.)

NATURAL: Men wake up looking as good as when they went to bed. … Women will somehow deteriorate during the night.

CHILDREN: A woman knows all about her children. She knows about their best friends, romances, secret hopes and dreams, favorite foods, fears and dental appointments. … A man is vaguely aware of some short people living in the house.

And then last, but not least:

Here’s Your Thought for the Day:

• Married men should forget their mistakes. There is no need for two people to remember the same thing.

Well, we hope that you had a few laughs . . . or at least a few smiles by reading through our list.

As a side note, there’s one thing we want to mention. Coming up soon you will have the option of either reading the Marriage Insight, like you are now, or listening to it as a podcast. We’re in the final stages of testing this new feature. And once it’s ready, when we send out the Marriage Insight you’ll be given the option to either read or listen. That is cool, huh?

Cindy and I hope you’ll have a blessed week as you remember to choose each other. We also encourage you to look for ways to infuse a few laughs into each day.

We give a lot of personal stories, humor, and more practical tips in our book, 7 ESSENTIALS to Grow Your Marriage. We hope you will pick up a copy for yourself. (It’s available both electronically and in print form.) Plus, it can make a great gift for someone else. It gives you the opportunity to invest in their marriage. And who doesn’t need that? Just click on the linked title or the “Now Available” picture below to do so: