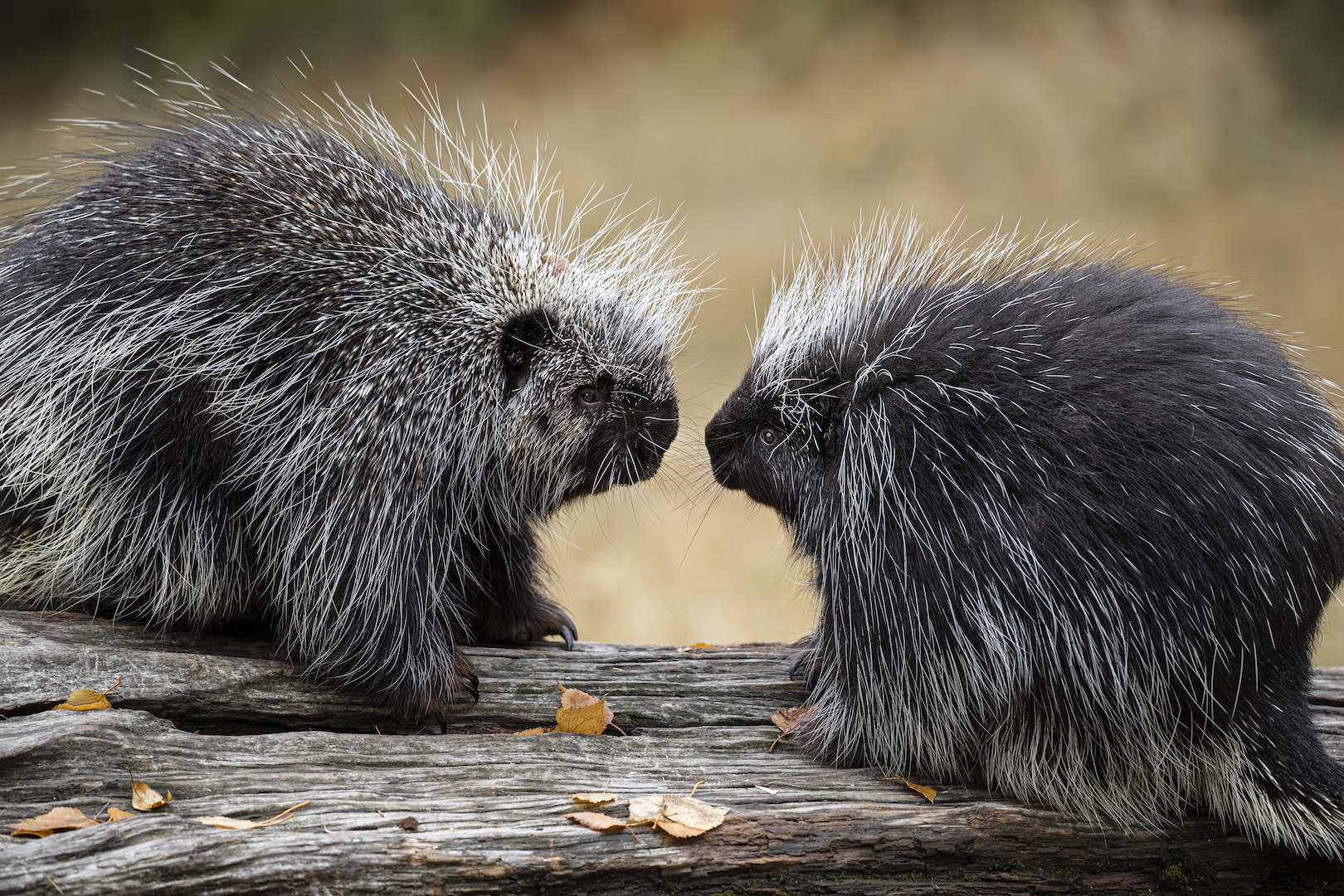 “Porcupine people don’t look like that’s what they are on the outside. But they’re hard to embrace because when you do, they can stick you with that which can hurt. God wants us to learn how to love these people even though they’re difficult to embrace. Loving them requires a thick skin and a soft heart, which IS something we can develop.

“But the real truth is, all of us have a little porcupine person in us that can rear its ugly head at some time. In every one of us there’s a beauty and some beast” (Lee Ezell).

The Bible tells us, “Reckless words pierce like a sword, but the tongue of the wise brings healing.” (Proverbs 12:18) Think about it: Do you speak to your spouse recklessly so your words pierce? Or do you “speak the truth in love“ —with sincere motives, so your words bring healing?

In the book Whole Marriages in Broken World written by Gary Inrig (Discovery House Publishers) we found some wise thoughts on marriage. There’s a chapter titled “The Porcupine Process” was so interesting we’d like to share excerpts from it. (You’ll have to get the book for the rest of what it has to say.)

“Someone has compared marriage to two porcupines trying to survive an Arctic winter. When the mercury drops and the snow begins to fly, they cuddle together for warmth. But when they do their quills stick one another. So they pull apart, but soon begin to shiver. So they move together again and stick each other. And so the dance goes on —damaging and distancing, damaging and distancing, until they realize that if they don’t learn to adjust to one another, they’ll never survive.

“One of the facts of marriage is that we both have quills —feelings, attitudes, behaviors, and ideas that really can stick to our partner. Learning to make our differences work for us rather than against us is one of the necessities of marriage. A healthy marriage is adjusted to reality. Productive conflict deepens a relationship, but destructive conflict threatens it.

“… Conflict tiptoes on the borderline of sin. ‘In your anger do not sin‘ That’s why we need to choose our attitude carefully. We can multiply evil instead of resolving differences. All too easily we can fall into attacking and retaliating. Suddenly, trivial issues become prime irritants, because all the rest of baggage is attached to it. The goal in conflict must not be just to keep peace but to establish a working harmony by resolving differences.”

Gary goes on to give “5 Rules of Engagement” that may help us to work through this “Porcupine Process”:

(1) “ATTACK THE PROBLEM, NOT THE PERSON.

“The problem is OUR problem, not just YOUR problem or MY problem. It affects US. It’s useful to think of the issue as in front of both of us, not between us. ‘WE’ are nonnegotiable; ‘IT’ is the problem. So the issue needs to be heard carefully, described clearly, and attacked cooperatively. At the same time, no problem can be solved that’s not owned and defined. The first step of healing is to identify the problem accurately and mutually.

As Dr. David Hawkins wrote in a Crosswalk.com article titled, “Attack the Problem, Not The Issue”:

“Agree that you need to become better communicators. Seek ways to make that happen. Agree you need to fight less frequently, seeking ways of healthier conflict resolution. And agree that you have places of disagreement—which is perfectly natural. Finding ways to compromise will be a challenge, but you’re up to the task. Practice asking each other, ‘How are we going to solve this one?’ Emphasize to each other, ‘We need to be a team in facing this problem.’ Notice how this attitude draws you together. Teamwork works not only in the sports arena, but in marriage as well.”

“Fixing the problem means that I will apologize readily for my contribution and focus on solutions, not mistakes…

“There’s a legitimate place for seeking wise, spiritual counsel. That’s very different than enlisting allies among family and friends, a process that distorts friendship and betrays marital loyalty. When we draw others into the problem, the tendency is a win-loss mind-set to develop, as others are encouraged to choose up sides.

To give further insight into this particular issue, please read:

• SPOUSES ARGUING IN FRONT OF OTHERS

“The injunction, ‘Don’t let the sun go down while you’re still angry,’ became one of the most important lessons of our first year of marriage. We determined before God not to go to bed angry at one another. We couldn’t always solve the problem and we haven’t always gotten to bed early, but we affirmed our commitment to ‘US.’ We then sought to resolve the issue or de-fang it. But the issue is ‘who takes the first step?’

Conflict needs to be firmly placed in a context of love and prayer. “Above all, love each other deeply, because love covers over a multitude of sins“(1 Peter 4:8). It’s virtually impossible to pray sincerely with your partner if conflict is unresolved between you. “Treat them with respect —so nothing will hinder your prayers” (1 Peter 3:7).

“The old saying is that nothing is as certain as death or taxes, although conflict in marriage is as well. But we can choose to fight to the BITTER end or to a BETTER end. The ability to resolve conflict is an essential ingredient of a healthy marriage.”

“He who loves a quarrel loves sin; he who builds a high gate invites destruction.“ (Proverbs 17:19)

“If you keep on biting and devouring each other, watch out or you will be destroyed by each other.“ (Galatians 5:15)

May God help you to be less spiky with each other and more inclined to work to THINK TOGETHER for the sake of your marriage relationship and to the honor and glory of God.